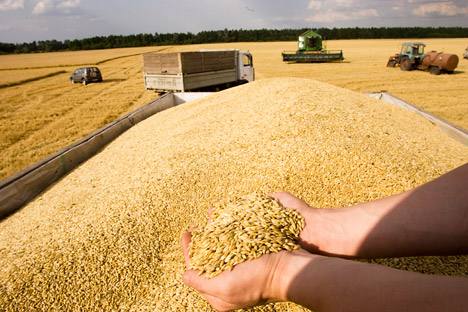 Agriculture in the city of Lipetsk, Russia. Source: ITAR-TASS

While developed economies have many advantages, there are areas where they can learn from the experience of developing countries, particularly the fast-growing BRIC economies.

As the world population grows, the global demand for food continues to accelerate, while food production resources dwindle. The total area of arable land is decreasing because of urban expansion, active use of fertilizers and pesticides. Furthermore, global food prices are volatile – Jikun Huang, director of the Center for Chinese Agricultural Policy, admits that global food prices tend to have a stronger influence on domestic food prices each year, so cost-planning becomes harder for producers and consumers.

According to estimates from Ramesh Chand, director of the Indian National Center for Agricultural Economics and Policy Research, to meet the global demand, food production must expand at least 3 percent annually for at least the next 20 years. So far, the world is lagging behind: From 1990 to 2007, world food output grew hardly more than 2 percent per year. How can a further 50 percent increase be attained?

Related: A new class of farmers emerges in Russia

The Economist Intelligence Unit (EIU) has conducted a series of interviews with experts and market players from Brazil, India, China and Russia within the scope of its study “Agriculture in high-growth markets.” The document calls these four countries the locomotives of global agribusiness.

The EIU believes the BRIC economies’ successes can provide valuable lessons for other developing (for example, African) and even developed economies. What can agriculture experts around the world learn from the BRIC countries?

1. Fewer subsidies. Europe and North America traditionally spend lavishly on subsidies to agriculture. The BRIC economies prefer alternative incentives, creating a more competitive entrepreneurial environment that is open to innovation, including for small businesses. In China, after the supermarket boom of the 2000s, a state program was adopted connecting local farmers with bigger retailers. In the early 2000s, Russia launched a grain intervention system enabling farmers to sell grain to the state when its price dropped below a fixed minimum. The scheme also works the other way around – when prices rise above the maximum, the state sells grain at the maximum price. This makes farmers relatively confident about how much they will get for their harvest. In Brazil, the state is participating in a weather-related rural insurance scheme against crop failures and natural disasters.

Opinion: What does the weather mean for Russian agriculture?

2. More innovation. This includes achievements in soil management and creation of new crop varieties. Developing a new variety of any particular vegetable is not enough – you need to have it efficiently introduced by farmers. In 2009, India launched the Soil Health Cards program, establishing hundreds of laboratories around the country to analyze the quality of the soil in each field and provide owners with fertilizer recommendations to prevent degradation. For its part, Brazil has been successful in plant breeding. Although the country previously imported apples from Argentina, the country is now exporting them, because it has developed a tropical-resistant breed of apples. There is a downside to such innovative solutions, however, as many European countries reject any genetically modified foods.

Despite these positive developments, emerging economies have plenty of challenges to address. EIU experts have pointed out the following fundamental problems that must be overcome for agriculture in developing economies to continue to grow.

- Infrastructure. Rustam Mirgalimov, CEO of the Razgulay Group, notes that the lack of infrastructure facilities drives up food prices in Brazil and Russia. The Russian Federation requires considerable investment in development of its rail transport systems and road network.

- Adoption of technology. Innovation is not always adopted in a timely fashion because of a lack of information, or poor access to technology, or unwillingness on the part of the regulator. In China, one-third of the labor force works in farming, which is slowing down modernization. It is a challenge in terms of promoting mechanization and increasing labor productivity. At the same time, India has the potential to double its agricultural land providing two crops a year (from 36 percent to 70 percent), but this practice is not widespread enough.

Since the devastating 2010 summer fires, Russia has once again built up its grain industry to become a net exporter of grain to the world market, but the country faces stiff challenges from countries as diverse as Brazil, the United States and Kazakstan. In order to remain competitive, Russia must develop institutions that can manage the sector rather than relying on the government to do so.

First published in the Slon magazine.