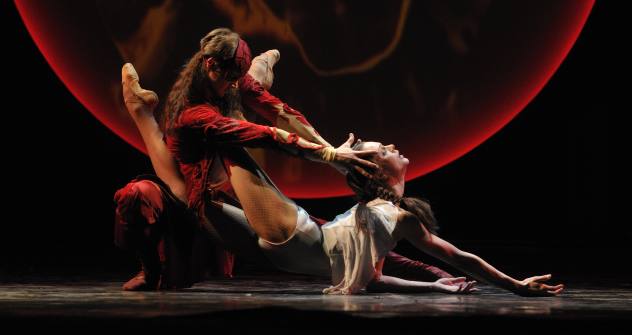 ‘Onegin’ is a choreographic version of A. Pushkin’s two-act novel in verse ‘Eugene Onegin’. The ballet presented by Russia's choreographer Boris Eifman. The ‘Onegin’ production by Eifman Ballet Company became one of the major events in contemporary

London’s theatres are exploring connections between Russian literature, history and politics this spring in a range of exciting productions.

Mikhail Bulgakov and Joseph Stalin are favorites on London stages at the moment. John Hodge’s long-running dark comedy of moral compromise, The Collaborators, is based on the fraught relationship between the two of them. From a kernel of historical reality, Hodge has sprouted a satirical fantasy about power and art; Hodge’s Stalin, 1984-style, attempts to control the writer’s mind, telling him that when it comes to man versus monster, “the monster always wins.” The play reopens at the Olivier, the largest auditorium in the National Theatre, from the end of April.

Across town in the Barbican Theatre, until April 7, The Complicite Theatre Company, known for its experimental and highly physical productions, are staging Bulgakov’s The Master and Margarita, the cult novel where the Devil and his entourage cause mayhem in Moscow. Complicite’s lively, almost dance-like style of ensemble acting is perfectly suited to the surreal story, which features giant cats, flying naked women, zombie balls and crucifixion. The fluidity of their technique means the action can switch instantly between the novel’s various settings, including the sub-plot in Jerusalem. A group of Complicite’s multi-talented actors can really make the audience believe that a tram has crossed the stage and decapitated a critic or that a few luminous lines on the floor are the walls of a psychiatric clinic.

An enormous projected map of Moscow is a recurring motif in Complicite’s awe-inspiring production. It serves several purposes, anchoring a story that otherwise spans space and time in a dizzying arc, and pinpointing the novel’s contested locations with a satisfying zoom effect. Complicite’s director, Simon McBurney, took a trip to Moscow to try and clarify this mysterious book whose puzzles have drawn a devoted following in the fifty years since it was first published. Bulgakov began to write it more than three decades earlier, but the work was censored. The author himself despaired of its ever being read and (just as the master does in the novel) burned the earliest draft, but he rewrote it and continued to rework it until his death in 1940.

Adapting the book into another medium is not for the faint-hearted. In 2006, the popular composer, Andrew Lloyd Webber announced in his blog that he planned to turn The Master and Margarita into an opera, saying it was “the most ambitious undertaking I have ever embarked upon”, only to announce a year later that it was “just too difficult”. Complicite’s latest theatrical version of a novel that has been screened, staged and serialized scores of times illuminates many of its shadowy layers of meaning. The skillful parallels between Pontius Pilate’s conversation with Jesus and the diabolical action in 1930s Moscow were particularly well drawn. Building on this mini Bulgakov-festival, Complicite and the National Theatre have set up a themed interactive resource called “Manuscripts don’t burn” which serves partly as a diary of the ensemble’s struggles to get to grips with a famously baffling novel.

Other recent adaptations of Russian Literature for London theatres include transformations of Tolstoy’s novels into a variety of media. Work continues on a film version of Anna Karenina starring Keira Knightly and Jude Law, to be released this September. Meanwhile, controversial choreographer, Boris Eifman, has brought his dance version of Anna Kareninafrom St Petersburg to the Coliseum. In a recent interview with Menu magazine, Eifman stressed the literary foundations of his ballets, since classic Russian literature concentrates on an individual’s “quests and torments”. He describes Anna Karenina as the tragedy of a woman in the grip of “untamable sensual passion”.

A very different adaptation, that explores the theme of literary compromise, is Rupert Wickham’s one-man-show, Stalin’s Favourite. The play is based on Orlando Figes’ The Whisperers, singling out the life story of the poet, Konstantin Simonov. Simonov was the son of a princess who reinvented himself as a proletarian poet. Figes calls him “the central figure and perhaps … the tragic hero” of his documentary tome on life in Stalin’s Russia. Wickham has an ambitious goal that he manages superbly, to hold the audience’s attention through an hour and a half’s exposition of 20th century horrors.

Wickham plays Simonov as an old man looking back from the end of his life in the 1970s. Occasionally a huge medallion of the eponymous dictator on the wall is lit symbolically red or patriotic music swells in the background, but Simonov’s mingled nostalgia, self-loathing and regret is poignant and compelling. The last date of the current tour is March 28 at the Arts’ Depot in Finchley, but there is talk of reviving the play later in the year.

The recent Russian protest movement is also being incorporated into stage performances. In an intimate attic space above the Bush Theatre earlier this month, three young women presented the first version of a new play called Revolution Square where the characters discuss faith, sex, money and power while a protest is going on around them.

Writer and director Jonathan Holmes also tackles contemporary Russian. He attempts to contextualize a changing zeitgeist and summarize decades of contested history in the space of a 45-minute sketch, which was always going to be tricky. The focus is personal rather than ideological; the acting styles move through naturalistic, Brechtian and declamatory and Holmes even asks the audience at the end which one they found most effective. A longer, more developed version of the play is scheduled for the autumn.

It is not all new plays and adaptations on offer this spring. There are some old favorites too as well as long-buried treasures. Chekhov is a perennial blossom in England and 2012 is no exception, from Three Sisters in Bridewell toThe Cherry Orchard in a converted Tobacco Factory in Bristol. A new version of Uncle Vanya runs from March 21 to April 28 at the Print Room Theatre, in a 1950s warehouse. The familiar Chekhovisms are all present: linen jackets and samovars, beards, guitars and shots of vodka, but the production has an immediacy and passion, played out in the gold mist of an Indian summer. This is due to a combination of Mike Poulton’s fresh translation and several compelling performances, up close to the audience who are ranged round all four sides of the modest room. Iain Glen’s very physical reactions to the pains of unrequited love, the horrors of ageing and humiliation, are particularly effective.

The English premiere of Leonid Zorin’s classic A Warsaw Melody at the Arcola Theatre in Dalston also opens at the end of March. It is another play about the long shadow of Soviet history, in this case a love story by an under-appreciated (and, in England, virtually unknown) playwright. Zorin’s young couple meet at a concert hall in Moscow, but “in Stalin’s brutally controlled empire their love simply cannot be”. The London-based Russian director, Oleg Mirochnikov is part of the new Belka Productions team whose aim is to “create bold, physically expressive and imaginative productions of Russian texts that have rarely been presented to English audiences, and act as a focus for Anglo-Russian cultural exchange”. It sounds like the start of an exciting project.