“Meat in a Pot:” Updating a Russian classic 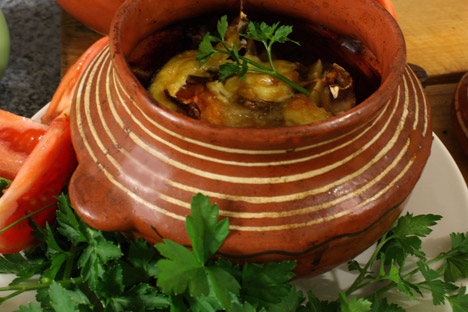 A constant of classic Russian cuisine is the principle of slow cooking – a trend that is enjoying an enthusiastic renaissance amongst Anglo-American homemakers, thanks in large part to its time-saving principals: you throw the ingredients into the electric slow cooker, set the timer for 5 hours and voila – the family dinner is ready and you have the day to yourself.

This kind of culinary magic was taken very seriously by the agrarian population of pre-revolutionary Russia, harkening all the way back to pagan times.  Pagan Slavs believed that fire and water were powerful deities, and that their combined force was particularly potent.  Cooking, which perfectly demonstrated this fusion took place in the ubiquitous Russian stove or “pechka.”

Russian stoves made of clay and covered with ceramic and clay tiles were built into the corner of every peasant home, taking up at least 1/5 of the floor space.  This efficient wood-burning unit not only heated the home and provided sleeping space for small children and the elderly of the family, but also acted as a highly efficient appliance for food preparation.  Russian stoves produced dry heat at a consistent temperature, while effectively keeping open flame away from the ingredients thus avoid scorching or burning.   The stove baked bread, dried herbs, simmered soups, and boiled the staple grains such as oats and buckwheat.

Related: Adventures of a Moscovore

More than just an efficient oven and stovetop, the pechka was the heart of the family dwelling.  Building a stove was a joyful communal event akin to a pioneer-era barn raising, with a riotious celebration to follow.  Once a stove was completed, a dish of kasha was set inside the oven to feed the “domovoi” or capricious domestic spirit, believed to inhabit every home and capable of causing mischief and mayhem if not continually appeased by small offerings or sly tricks.

During the long winter months of inactivity, adult men dozed long hours nearby, or often right on top of the stove.  The Russian word for “lazybones,” is “pechushnik” a clear reference to dozing on top of the stove.   Winter naps could only be interrupted  to enjoy a hearty stew cooked in one of the ovens directly below.

Related: Kharcho: a welcome guest from the near abroad

The classic Russian stew today is called simply “Meat in a Pot,” and its preparation harkens back to the era of the “pechka:” meat and vegetables are layered in 1-portion sized clay pots, covered, and baked in a hot oven just as they were in the 18th Century countryside.   The advent of electricty, gas in the last century did little to the popularity of “Meat in a Pot,” which continues to feature prominently on menus to this day.  Although the stew is hearty and filling, I find it is often watery, and lacks both flavour and texture.  The Russian fad of adding a thick layer of mayonnaise to the top is an unfortunate attempt to correct these flaws.   I had relegated “Meat in a Pot” to the culinary scrap heat until a recent weekend.   As snow fell steadily and HRH (my handsome Russian husband) did his best “pechushnik” routine in front of the flat screen, I found myself with the basic ingredients for “Meat in a Pot.”  Since I love a culinary challenge, I set out to see what I could do to make this Russian classic a little more palatable.   A little research in “The Flavor Bible,” a rummage through the spice rack, and a little fiddling with the ingredient preparation and the results are tasty enough to appease even the grouchiest domovoi lurking in your stove!

- 400 grams of plum tomatoes, blanched, peeled and chopped (or 1 tin or prepared)

- Flour for dredging the meat

1.  Toss the eggplant cubes with a generous handful of table salt.  Arrange the cubes in a colander, set into at an angle in a bowl and let sit at room temperature for 45 minutes.    Rinse cubes briefly in cold water, then pat dry with paper towel.  Arrange the eggplant on a plate, cover with a piece of paper towel and process for 1 minute at the highest setting in the microwave.  Set aside.

3.  Pat the meat cubes dry with paper towel, then dredge them in flour.  Skim a small amount of olive oil on a heavy-bottomed skillet or Dutch oven until it shimmers.  Sear the meat for 30 seconds on each of its surfaces.  Set aside.

4.  In a non-reactive mixing bowl mash the anchovy fillets with the back of a fork, and then turn out onto a cutting board.  Add the mashed garlic cloves, kosher salt, thyme, rosemary, parsley, orange zest, and cracked black pepper.  Use a large kitchen knife to blend by a combination of chopping with the blade and scraping together with the side of the knife until the mixture forms a paste.   Set aside.

5.  Combine the tomatoes, tomato paste, and the bouillon/wine combination in a food processor and pulse until smooth.

6.  Assemble the pots or casserole:  lightly butter the inside of the clay pots or casserole.  Arrange the meat on the bottom layer, topped with roughly one fourth of the garlic/herb/anchovy paste.   Layer the rest of the vegetables:  potatoes, carrots, eggplant, adding a fourth of the paste to the top of each layer.

7.  Pour the tomato/bouillon mixture into the pots/casserole so it just covers the top of the mixture.

8.  Cook for 1.5 hour, and then test the potatoes to see if they are tender.    Remove from oven if done, garnish with fresh parsley and serve with hearty black Russian bread and butter.