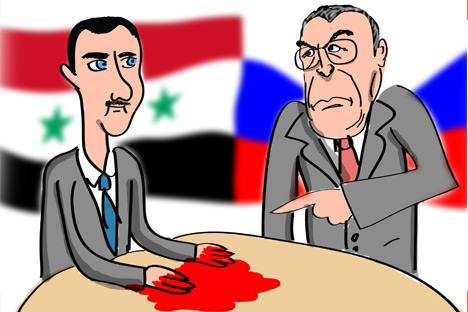 Moscow expresses displeasure with Syria’s leadership. Does it mean Russia will reassess the situation in the Middle East’s troublesome region?

{***Another look at Syria by Konstantin von Eggert***}

Another look at Syria

Is Russia changing its position on Syria? I have been asked this question again and again since my recent interview with Foreign Minister Sergei Lavrov on Kommersant FM radio in Moscow. Although murmurs about the behavior of Bashar Assad’s regime have been heard from officials in Moscow before, Russia’s diplomat-in-chief became the first to articulate what can only be described as displeasure with Damascus.

“We absolutely do not justify the Syrian leadership,” Lavrov told me. “We consider that the Syrian leadership reacted incorrectly to the rise of nonviolent protest, that despite the promises that were made in response to our numerous appeals, they are making many mistakes, and those steps being made in the proper direction are happening late.”

In the same breath the minister repeated Russia’s previously stated position on the Syrian question. Making Assad’s resignation a precondition for any political settlement is useless and will only encourage him to cling to power more; the Syrian opposition is an unknown entity with even less influence; the Sunni regimes of the Persian Gulf are obsessed with overthrowing the Alawite government in Syria.

Lavrov completes the argument with this: Syrian rebels are not just peaceful people who took up arms to defend their families and homes. He claims there is a sizeable al-Qaeda presence within the rebel ranks. And the Syrian regime’s claim that it is fighting Islamists is worth paying attention to.

However, the most interesting part of the interview was Lavrov’s musings on a possible settlement of the Syrian conflict. He thinks the model used in Yemen to make President Ali Abdullah Saleh leave the office he occupied for more than 30 years and install a more-or-less legitimate government could be adapted to Syria’s calamitous situation.

Opinion: The Russian position on Syria: myths and reality

In Yemen, representatives of the opposition, tribal chiefs (which is frequently one and the same thing there), representatives of Saleh and officials from the Gulf states sat down to agree on the president’s departure terms, which included guarantees of personal immunity and a transition period before new elections.

It appears that Moscow is starting to seriously consider the possibility of Assad’s early departure, as it is aware that the rivers of blood he spilled will prevent any return to normalcy as long as he and his family are in power.

A roundtable framework would help Russia negotiate to preserve its business and military interests in Syria, including the now-unclear future of the Tartus naval station on the Mediterranean coast. But the Kremlin’s other, and no less pressing, concern would be to make any settlement look different than regime change.

This was the principal motivation behind Moscow’s adamant stand on Syria in the United Nations Security Council, and its demonstrative support of the Assad regime. The course of the war in Libya, which Russia effectively sanctioned by abstaining when a “no fly zone” resolution was passed, angered the Russian leadership, especially president-elect Vladimir Putin.

Putin has said that he believes Russia was conned into accepting regime change by the West, and has vowed not to let it happen again. For the Kremlin, Assad’s fate is secondary to the principle that organizations such as NATO, and even the Unted Nations itself, cannot decide who is going to rule sovereign countries. And although Russia has opposed regime change disguised as humanitarian intervention since the Balkan wars, there is also a new self-interest at work. There is no exact parallel between the Arab Spring and the protest movement in Russia, but Putin and the country’s ruling class are mindful of any international precedents that could, at some future date, legitimize outside interference.

{***End the Syrian crisis our way by Yevgeny Shestakov***}

End the Syrian crisis our way

Western public opinion is outraged that Moscow and Beijing are refusing to accept a resolution condemning the Assad regime’s war crimes. The western media, citing unnamed security service sources, claim the Russian elite has commercial interests in Syria, but this has been denied by the Russian Foreign Ministry and there is no evidence of any. So, before condemning Russia’s position, consider its real reasons for taking this line.

Russia has repeatedly declared that it is not specifically defending Syrian president Bashar al-Assad. But talk about Syrian civilians taking up arms is a myth created by the Syrian opposition. Addressing the US Congress recently, Secretary of State Hillary Clinton expressed doubt about supplying US arms to Syrian rebels, as they have groups close to al-Qaeda in their ranks.

According to repeated leaks from intelligence services, militants from Libya and Yemen are fighting Assad. Russia’s permanent ambassador to the UN, Vitaly Churkin, told the Security Council that Syrian opposition groups were being trained in Libya. Significantly, the Libyan leadership did not deny this. So claims that the Syrian army has shot unarmed civilians are not credible. As Western leaders rightly point out, the aim of international intervention is to stop the bloodshed in Syria. Russia fully supports this goal. But it does not consider it helpful to include in the resolution the question of who started the bloodshed in Syria, since that discussion will not help end the violence. In recent months, Syrian cities under Assad’s control have seen a series of suicide bombings, which have the hallmarks of al-Qaeda and the Afghan Taliban. These explosions have claimed dozens of civilian lives. Russia suggests the future UN Security Council resolution condemns the violence and calls for a ceasefire from both sides – Damascus and the opposition. Moscow and Beijing want sanctions imposed if the ceasefire is violated.

During the Russian foreign minister’s visit to the headquarters of the Arab League in Egypt, five main provisions were formulated that could form the basis of a future Syria resolution. They are an end to violence by all sides; an impartial monitoring mechanism; no military interference; free access to  humanitarian relief for all Syrians; and firm support for the mission of the UN-Arab League envoy Kofi Annan. These provisions could provide a platform for a clear roadmap to a settlement  in Syria.

Damascus must implement reforms that will help reveal the Syrian people’s opinion as to who should rule the country. The Syrian opposition should take an active part in these reforms.

Russia maintains that any attempt to sideline the UN Security Council and intervene in Syria runs counter to international law. Such actions threaten the post-Second World War international institutions designed to ensure global stability. Russia is not against introducing changes in the system of international laws and developing new ones that would allow the intervention of the international community if some countries violate fundamental human rights. But these terms need to be established in advance.

When Israel publicly declares that it is planning to attack Iran’s nuclear facilities, the world must recognize that a future war can be stopped only through the collective efforts of the UN Security Council. Any steps that bypass the Security Council diminish its authority, undermine its credibility and reduce the confidence of its members. This will seriously harm its ability to make decisions in the future.