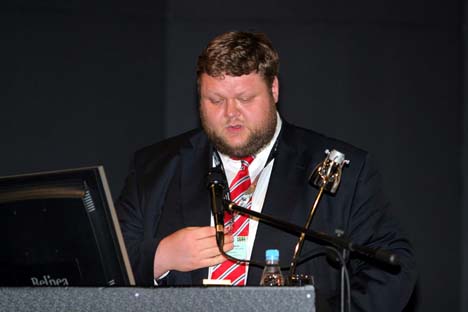 Russia Beyond the Headlines: At the Delhi summit, the BRICS countries decided to set up their own development bank. Does this mean that BRICS is turning from an amorphous entity with uncertain goals into a full-fledged economic bloc?

Oleg Danilin: The BRICS countries are indeed moving towards creating a full-fledged political and economic bloc. It is interesting that they are doing it in the same sequence as the European community: first they determined the economic mechanisms and then immediately raised political issues.

RBTH: Experts at various levels have repeatedly pointed out that there is too little common ground between the BRICS countries. Do you share that view?

O.D.: Not quite. The emerging BRICS union has one powerful uniting idea: the desire to use this association to dramatically enhance the role of its member countries in the world economy and politics. There is no hint at any common security system or any other military aspects of cooperation because the national development strategies and economic structures remain different.

Many developing countries that can afford an independent foreign policy are unhappy with the mono-polar world in which one country imposes its will on all other countries. That is why this union does not include Mexico or Turkey even though they are growing faster than some BRICS countries.

RBTH: What political and economic benefits will BRICS countries obtain from creating their own development bank and switching to settlements in their national currencies?

O.D.: The creation of a supranational BRICS development bank and a mechanism for mutual crediting will have a far-reaching impact on the global financial system. In fact, it will be a powerful and almost autonomous structure that may accumulate investment resources from world markets and redirect them into development projects in the BRICS countries. And what’s more, these will be projects that the BRICS countries themselves consider promising, thus making all the BRICS economies more competitive without any damage to one another.

RBTH: Doesn’t it amount to a “tit-for-tat” response from the developing world for having not been allowed to increase its role in the IMF?

O.D.: We do not think it is a matter of “tit-for-tat,” the issue at stake is of fundamental importance. If the “one country-one vote” principle is adopted it would mean a new Bretton Woods, an ultimatum to the U.S. on the principles of economic and political decision-making. For example, Brazil’s voice at the World Bank is proportional to its share in the capital––a little over 2 percent. If the BRICS development bank adopts the “one country-one vote” principle, Brazil’s share will be 20 percent.

RBTH: Does the dynamic of trade and economic relations within BRICS warrant a transition to mutual crediting and settlements in national currencies? Could it happen that the main beneficiary of the new economic bloc will be China rather than Russia and India?

O.D.: The dynamics of trade relations are not the crucial factor. What matters is the considerable and very real appetite among all the BRICS countries for direct investments. Needless to say, China, as the largest and fastest growing economy, will tend to dominate. But we do not believe that China will be the only country to benefit from this bloc. Currency diversification, mutual investments and at least partial withdrawal from the dollar and euro are in the interests of all the countries.

RBTH: What factors are still hindering the development of trade between our countries in national currencies?

O.D.: “Hindering” is not quite what’s happening with trade between BRICS countries. Mutual trade is growing very rapidly. It depends on internal country demand, which in turn is determined by the growing disposable income in BRICS countries, a fact that cannot be denied. And these countries account for half of the world’s population.

The factors that hinder trade are mainly the high cost and low productivity of labor (in Russia, for example); low-tech production, which in Russia depends on the availability of investments; and structural imbalances in the economy (priority development of extractive industries at the expense of transport, communications and science-intensive production) that determine the country’s place in the international division of labor.

RBTH: How does the increased use of national currencies square with the program to create an international financial center in Moscow?

O.D.: The creation of a BRICS union fits very well with the concept of creating an international financial center in Moscow because we will be able to provide not only a platform and infrastructure for foreign investments, but also a country with great investment potential for direct private investment of BRICS capital.

RBTH: Considering China’s great economic power, won’t it end up at the top? Will the world get a new reserve currency (the yuan) and will the role of the ruble in the world economy change?

O.D.: In the longer term, the yuan may become partially convertible, but considering the potential global demand for diversification of currency risks, China will tread warily. A stronger yuan is bad for China’s economy because it slows down its economic growth. So, it will be a slow process. But the introduction of the cross-crediting mechanism between BRICS countries may make their currencies quasi-convertible against one another and make each of the currencies, including the ruble, more attractive against the dollar.