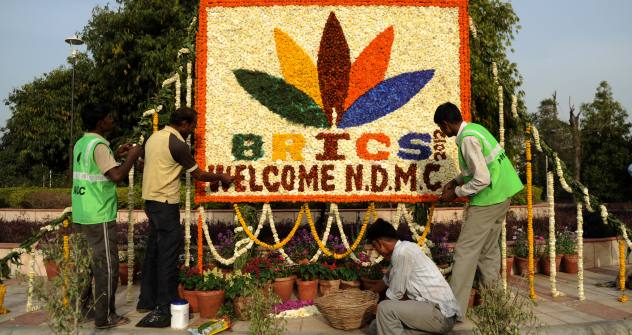 After South Africa's accession to BRIC (Brazil-Russia-India-China) in 2010 this bloc turned into the BRICS group. Now its leaders have been making several stances which indicate that the group is becoming a real global player. Source: AFP / East News

Halfway through their transition from emerging markets to the world’s leading economies, the leaders of the five BRICS nations met for the forth time in Delhi, India at the end of March to deepen ties and continue their transformation from a clever marketing term into the world’s most powerful economic club.

Russia's President Dmitry Medvedev, who presided over the first BRIC summit on June 16, 2009 in Yekaterinburg, called for changes in the world’s financial system to reflect the growing role of the BRICS – Brazil, Russia, India, China and South Africa – in the global economy. Medvedev said the reform of the world's financial-economic architecture fails to take sufficient account of their role in the global economy.

Related: What developed economies can learn from the BRIC

"I consider that the guarantee of the success of the BRICS project may be the commonality of our core interests," Medvedev told delegates at the meeting. "We are all interested in reforming the world's aging financial system. Such reform is proceeding, but today we are expressing our displeasure at the speed at which it is going ahead, which is reflected in the draft of our statement. It is not taking into account the role in the global economy, which the BRICS and other states with developing markets already play.”

Medvedev suggested that the BRICS start to settle their trade contracts using local currencies, which will be another step towards breaking the U.S. dollar’s hegemony over global trade.

Russia and China have already introduced mutual settlements of trade contracts in their respective national currencies, and a similar deal was signed with India.

"With China, it took us three years to [evolve] from initial conversations to trading in local currencies," VEB chairman Vladimir Dmitriev told reporters on the sidelines of the summit. "I think we will meet similar terms with India," he said.

Finally, the leaders of five of the world's fast growing nations agreed to explore setting up a BRICS Development bank similar to the World Bank or the European Bank for Reconstruction and Development that would invest into things like infrastructure that promote deeper economic integration between the members.

While most of the deals signed were economic, the BRICS are also pushing for more political clout on the international stage to reflect the changing world order. They want a bigger say in the IMF, which is being restructured, as well as at other international bodies like the United Nations, where they feel they play a junior role.

“[The reform of the IMF] should be carried out to the end, and done as we agreed within the G20 – not putting it off because problems in the international financial system persist,” he said. While the BRICS is still not an overtly political body, Medvedev said that the club’s long-term goal should be to become, “a full-fledged mechanism of global economic and political cooperation.”

China's President Hu Jintao echoed Russia’s central foreign policy goal of building a “multi-polar” approach to world politics, a challenge to the unipolar polar world where the United States dominates. The BRICS countries should pursue this multi-dimension international cooperation within the framework of G20, the United Nations and other international structures, said Hu. “We should strengthen political interaction through dialogue and exchange; fully taking into account key interests and concerns of each other in order to give an example of mutual respect and equal consultations on the international arena,” Hu continued.

The meeting comes at a poignant time for the BRICS. As the developed world languishes in the mire of on-going sovereign debt crises and austerity, the BRICS economies are booming.

Ten years ago, then Goldman Sach’s chief economist Jim O’Neill coined the term BRIC (South Africa was added in 2010) and predicted they would become the biggest economies in the world by 2027. But as they reach the halfway mark, the BRICS are growing even faster than Goldman originally predicted and already are account for half of the globe’s economic growth.

“Over the past decade, the BRICS have contributed close to half of the world’s growth and emerging markets. This is more than double the BRICS’ contribution in the 1990s (23 percent) and the 1980s (18 percent),” Goldman analysts Dominic Wilson, Kamakshya Trivedi, Stacy Carlson and José Ursúa said in a decennial paper released on the 10th anniversary of O’Neill’s original paper in November.

The pace of growth is likely to slow from here, as they all increasingly become middle-income countries with a burgeoning middle class, although the BRICS will continue to consistently outstrip the developed nations, the Goldman analysts say. At the start of February, Renaissance Capital’s chief economist Ivan Tchakarov warned that Russia would hit a “middle income trap” as soon as 2014 and the other BRICS will flow suit soon afterwards.

This fast pace of growth has already thrown up huge opportunities for investors. If an investor put $100 into Russia’s stock market in 2001, it would now be worth $414, compared to the $112 the investor would have earned in the U.S. market. However, as the BRICS come out of the frenetic ‘catch up’ phase of super-charged growth, policies will have to change.

“Fast growing economies eventually slow down as their easy catch-up productivity gains (relative to developed economies) are gradually exhausted,” Tchakarov said. “Fast growing economies appear to start facing the middle-income trap when their GDP per capita levels reach around $16,000 in constant 2005 international prices… which Russia will reach in 2014… China will hit the middle income trap only in 2020, Brazil in 2024 and India in 2038.”

Even despite the fast pace of development, the income gap with the rich world will persist far beyond the point when the size of the BRICS economies over take those of the developed world.

Russia and Brazil are likely to see incomes rise another six-fold and four-fold respectively between 2010 and 2050, but the poorer countries of China and India will see even bigger gains: nine-fold and 12-fold respectively, according to Goldman Sachs. Still, even these enormous gains are not enough to bring equality to the globe, as incomes in the BRICS will remain a fraction of U.S. per capita incomes even in 2050, whether measured in absolute or purchase power parity terms.

“This underscores the point we also emphasized in our very first BRIC projections: The process of income convergence takes a long time,” the Goldman analysts said.