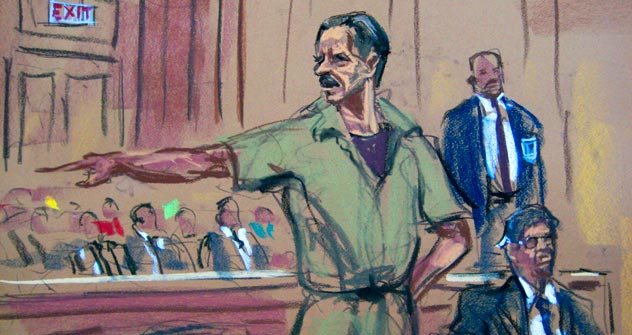 It remains to be seen wheather Russia will be able to contribute to Russian citizen Victor Bout's release. Source: Reuters / Vostock Photo

On the night of April 5th, the New York Federal Court sentenced Russian citizen Viktor Bout to 25 years’ imprisonment and $15 million fine on charges of intent to sell weapons to the radical left-wing group Revolutionary Armed Forces of Colombia (FARC).

Victor Bout, who was reportedly the inspiration for the main character in the Hollywood blockbuster “Lord of War,” was arrested in Bangkok in March 2008 at the request of U.S. authorities. Washington accused Bout of arms dealing, conspiracy to murder U.S. citizens and supporting terrorism. Bout claimed he was simply an entrepreneur with a legitimate international transportation business. In 2010, he was extradited from Thailand to the US.

The court verdict was a compromise: the prosecution had demanded a life sentence given the quantity of arms negotiated between the parties to the deal, while Bout’s lawyers insisted that all charges be dropped for lack of evidence in a trial they claimed was politically motivated.

Bout’s wife, Alla, described the verdict as a victory for her husband’s lawyers: “Since the judge passed the minimum sentence, that means she agreed that the charges were false. The prosecution has no documents, bank account statements and so on. The judge was impartial in delivering the sentence, even though she is constrained by the American judicial system,” Ms. Bout is quoted as saying.

In the morning following the sentencing, the Russian Foreign Ministry issued an official statement describing the court verdict as “unfounded and politically motivated.”

“The Russian Ministry of Foreign Affairs will apply all efforts to secure Viktor Bout’s return to his homeland using all available international legal mechanisms. This topic will undoubtedly remain a priority on the Russian-American agenda,” the Ministry’s statement read.

Experts’ opinions on the Russian’s fate are divided:

“Russia had a chance of influencing the US before the sentence was handed down. Unfortunately, Russia did not have enough political clout to settle the situation on terms that would have demonstrated Russia’s power and strength and would have allowed it to save face.”

“I think his fate may be a subject for bargaining between the Russian and American diplomatic establishments. There is no doubt in my mind that Bout is no ordinary criminal and that the interests of the states are involved. In situations like this, such prisoners are exchanged or the sentence is commuted.”

Related: U.S. gets its hands on the “Lord of War” at last

“It is up to the defense lawyers to appeal the sentence. Russia’s business is to help provide arguments in favor of such a decision. If such arguments exist, Russia must, in accordance with the law, present them and it must render all possible assistance to the lawyers and to Bout’s wife. In regards to the extradition, the charges are too serious for there to be any chance. Theoretically this is possible, so the Foreign Ministry must, of course, do all it can to try to have him extradited to Russia.”

Combined report based on the information from RIA Novosti and Kommersant.