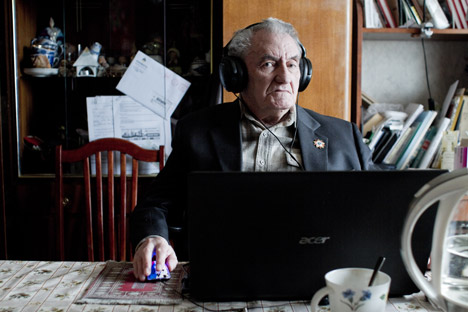 87-year-old Dmitry Lomonosov has kept his LIveJournal account for eight years and, with more than 2,000 subscribers, it has become quite popular. Source: Kommersant / Varvara Lozenko

The largest segment of Internet users may be young people, but increasingly the web is a tool for older people to engage with society.

“I am officially the oldest Russian Internet user, I am 87,” said Dmitry Lomonosov, a.k.a. lomonosov, one of the oldest users on the blogging platform LiveJournal. He has kept his LIveJournal account for eight years and, with more than 2,000 subscribers, it has become quite popular. He mostly writes about World War II, recalling battles and his time as a POW. “The blog is sort of a place for me to vent,” Lomonosov said. “I wake up in the morning, have breakfast and immediately turn on the computer to read and answer questions. I can’t imagine what my life would be without the Internet. I do have a country house, but I am not strong enough to garden there. But I have something to do here, I have a hobby.”

As the world’s population ages, more and more retired people may live more of their lives online, but today Dmitry Lomonosov is an exception. He used to work on electronic design automation and operated some of the first industrial and personal computers in the country, so he has no problems with electronics.

His friends on the web are people of all ages. There is Likusha, an 88-year-old poet from Israel, and a friend from Australia who is 90. “I am probably the oldest on the Russian segment of the Internet, but when it comes to the global net, I am not. There’s a motley crew there, and I keep in touch with people from all around the world.” One of his readers wrote that she was acquainted with the son of the Italian medic who had saved Lomonosov during the war; she even sent a photo of the medic. “Once again, I praise the Internet,” Lomonosov wrote. “This would have been impossible without it! Sixty-four years later, I have a picture of the man who saved my life!”

Recently, a Polish blogger wrote that he found the village in former Eastern Prussia, where Lomonosov worked as a farm hand for a German landowner. The veteran wished to visit that place and was offered assistance. “I found a goal in my existence as a pensioner that rekindled my interest in life,” he wrote on his LiveJournal account. “I am making plans. If I live long enough to make this journey, and I hope I will, then you will see my photo report.”

“My blog is my newspaper”

Social isolation is one of the main problems senior citizens face. Sometimes their audience is limited to a cat, children and social workers for years on end. Russia is working to involve older people in the “information field.” One such project is called “Babushka [grandmother] Online,” which offers pensioners free computer literacy courses and will be launched in 45 regions of the country by the end of the year. But it takes an active person to attend these lessons, and it is easier for active people to find friends. It is much harder for those who stay at home most of the time. “My granddaughter Masha literally made me start a blog,” said Galina Tarasova, 74. “She told me: ‘Grandma, you’ll be a blogger. Choose a screen name.’ I remembered that we had a secret club with girls from school – we called it Seka-Meka. We mostly drank tea with sweets after school; that was our whole secret. But the name seemed funny, and I chose the nickname seka-meka. I have been doing fine on the Internet, I made friends there and learned to find people who make for interesting friends.” 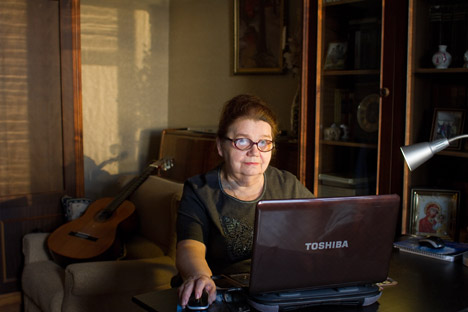 Tarasova has all kinds of bloggers of all ages on her friend list, although she admits to feeling some age discrimination online. “Some younger users think that we, the elderly, can barely read. I have posted photos on my granddaughter’s wall on a social network, and her friends were shocked: ‘Your granny shot this herself and posted the pictures? You’re lying!’ Why? I take pictures, use tags, write stories, search for pictures and post them. I used to edit wall newspapers all my life. My blog is my newspaper, and I keep publishing it.”

There are politically active bloggers over 70 in the Russian blogosphere as well. One of the most prominent activists is Engelina Tareeva (tareeva.livejournal.com), 86. “Three years ago Yabloko party supporters suggested that I write this blog. I use the phone to dictate my texts, and they post them. The thing is that I type very slowly,” Tareeva said. But when it comes to feedback, she studies the opinions on her own and says that for her this is the most interesting part of the blog. “I used to have a very limited social circle, but now I have more friends than I can handle.”

Tareeva’s publications are reproduced on many other web sites; publishing houses have offered to publish a book based on her blog, and advertisers have contacted the blogger several times. But she says she is not interested in making money, though: “I have a different goal,” she said. 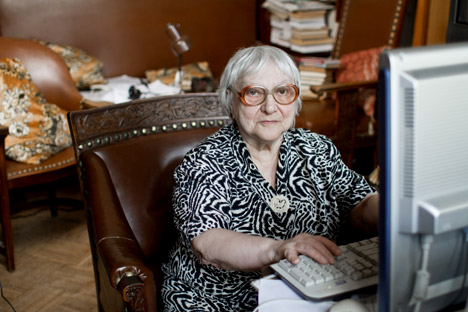 There are some specific rules in the blogosphere that help users gain popularity. The ability to provoke the audience and take a stand against public opinion is one of them. “I sometimes draw fire upon myself,” Tareeva said. “I believe that two evils threaten Russia now – nationalism, where [Alexei] Navalny is the biggest threat, and the golden calf, the money cult, personified by [Mikhail] Prokhorov. These are my personal enemies and I’m trying to fight them to the best of my ability.” Tareeva is not afraid of criticizing, sometimes rather sharply, the idols of many Russian bloggers. Some of the readers are so irritated by the posts of the Yabloko activist that they rebuke her unceremoniously and often use foul language to respond to her messages, writing, “I wonder how much the Kremlin pays you, Engelina?” or “Old witch, you are making the most of it, do you know that this is your last chance?” One day she became hypertensive while reading the negative comments. Since then, she has tried to respond less emotionally to the vicious attacks. “I tend to adopt a motherly attitude towards everyone. And indeed, this is my last chance to tell the truth, to open people’s eyes to really dangerous politicians. Humanization of behavior is another task – there is too much aggression everywhere.”

50.8 million – the number of unique Internet users over 15 years old in Russia

33 – the average age of the Russian Internet user

14 percent – the share of Russian pensioners who go online; 10 percent live in Moscow

Russia ranks first in Europe in the number of Internet users, followed by Germany and France

Yet the main mission of Russia’s online grandparents is what Engelina Tareeva calls “building bridges.” “Remember what Hamlet said? ‘The time is out of joint,’” she said. “In order to restore the connection between my time and contemporary life, I share my experience, write about myself, my friends, the people who are gone. I have a feeling that I owe them something, that I must pass their memory on to those who follow. This blog is my life now. I wouldn’t be here if it were not for the blog. It is the only thing that keeps me going. I’m in a hurry – I need to tell this and then tell more.”

Dmitry Lomonosov also believes that he must tell young people the things that “remain unsaid and unwritten, things that will become history when we go.”

The older generation keeps online diaries for others to remember them and those who they loved. They are trying to leave a footprint in virtual reality, where there is no death. Galina Korshunova, a 72-year-old pensioner from the Kursk Region, writes about her late husband on her blog: “The last thing we read together was Sonnet 146 by Shakespeare: ‘So shalt thou feed on Death, that feeds on men, And Death once dead, there's no more dying then!’”

This article is abridged from the original version which first appeared in the Ogonyok magazine.