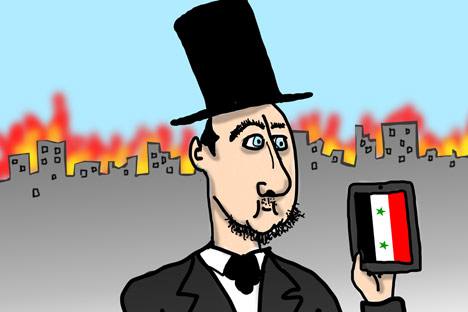 Although the plan devised by Kofi Annan, who is now serving as an UN-Arab League special envoy to Syria has been supported by the United States and Russia, it is unrealizable, like all other theories that are at odds with the logic of civil wars.

Abraham Lincoln was lucky to have lived when he did. Surely he would have appeared a vicious tyrant had Twitter, Facebook, Al Jazeera, NATO and the UN existed when he encouraged the efforts of Union forces to suppress Confederate separatists. But Lincoln is an American national hero, a bastion of democracy and a martyr. It is quite possible that in the future these very same words will be used, at least in the Arab world, to describe Syrian President Bashar al-Assad, who is now widely reviled by the international community. History is full of surprises.

The plan devised by Kofi Annan, who is now serving as an UN-Arab League special envoy to Syria seems interesting, and has been supported by the United States and Russia. But it has one serious drawback: the plan is unrealizable, like all other theories that are at odds with the logic of warfare, and, particularly that of civil wars.

Recently, the Syrian military ousted the militants of the Free Syrian Army (FSA) from Homs, Idlib and the Damascus suburbs, thus moving the hotbed of the conflict to mountainous and rural areas. The strategic initiative is in the hands of al-Assad’s supporters, and they are unlikely to give their rivals a chance to regroup and restore their combat power. Such a rebound seems even more doubtful, given that there are other active forces in Syria apart from the FSA, such as various Islamist troops and criminal gangs, which do not report to anyone. Additionally, Iran is now standing behind al-Assad, and the Arab League seems to be falling apart as Algeria, Iraq and Lebanon reluctant to blindly follow the political lead of Saudi Arabia and Qatar.

During the second Friends of Syria conference in Istanbul, the Syrian National Council (SNC) was recognized as the “only legitimate representative body of the Syrian people.” This decision was backed by the United States and EU, although Turkey and the Arab monarchies of the Persian Gulf believed the FSA would be more fitting for this role. The conference participants also made a decision to streamline the supplies of arms, ammunition and telecom equipment to the opposition. An increase in humanitarian provisions, about two-thirds of which end up in the hands of insurgents and dealers, will allow militants access to food and medications.

Opinion: The Russian position on Syria: myths and reality

The results of the conference destroyed the plans of Qatar and the FSA to secure a priority supply of funds and arms for their supporters in Syria. However, Qatar has been making efforts to replenish the FSA troops with Libyan militants, who are crossing the territories of Turkey and Jordan. Despite Qatar’s strong advocacy, a decision to proceed with military intervention has not been approved. Doha and Riyadh were forced to give up as they couldn’t change the situation in Syria without additional support. The United States and EU have taken the lead in the resolution of the Syrian crisis, thus diminishing the role of the Arab League. NATO has learned the lessons of Libya: this time, the West is trying to bring a secular opposition to power in Syria. The FSA is expected to become a military wing of the SNC, which will be in charge of paying, organizing and providing for its fighters. The inevitable outcome of such an approach would be the escalation of tensions between FSA head Colonel Riad al-Asaad and SNC military bureau chief General Mustafa al-Sheikh.

With regard to Annan’s plan, it’s noteworthy that the release of political prisoners and the establishment of new political parties for the elections can only be achieved through negotiations between the opposition and the president after the former drops its call for al-Assad to “step down unconditionally.” The SNC is not ready for that yet, partly because the Istanbul conference marked the start of financing the opposition. The Persian Gulf monarchies will provide approximately $500 million, whereas Tripoli will transfer $100 million to cover FSA needs and the EU will offer $100 million for “humanitarian purposes.” Annan’s plan stands in the way of the full-scale deployment of this project, which will inevitably end in massive plundering, and thus stands no chance. It will be torpedoed by both al-Assad and the opposition and will result in a new round of mutual accusations. Al-Assad is not the only or even the biggest contributor to the impossibility of a peaceful dialogue in Syria. In fact, the opposition and its sponsors don’t want such talks.

As for Moscow, it has taken a clear and pragmatic stance: Russia is protecting its own interests and not al-Assad. It doesn’t have any sympathy for the rebels – a position strengthened by the outcomes of the Arab Spring. After the events in Libya, Russia has little trust in the West. However, it will not send its troops to Syria, in contrast to what it would have done during the Soviet era. It seems that this is all Russia’s critics are left with.

Eugene Satanovski is the President of the Institute for Middle East