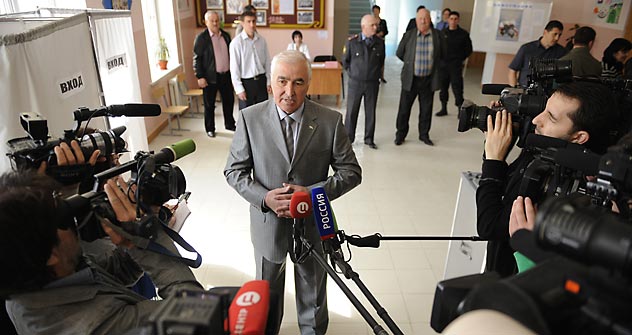 But despite the peaceful vote, experts believe the region has only received a brief respite from the many problems it faces.

Leonid Tibilov, a former head of the KGB in South Ossetia has won the republic’s presidential election  with 54.12 percent of the vote in a run-off. Bela Pliyeva, head of the Central Election Commission (CEC) of South Ossetia, announced the results on Monday.

Leonid Tibilov was born in 1952. Although he is a teacher by training, he has worked in state security forces all his life. Yet his career is not limited to his KGB service: Tibilov was among the key players in resolving the Georgian-Ossetian conflict. He began working on Georgian-Ossetian relations in 1999 and has headed the expert group of the plenipotentiary delegation of South Ossetia for peaceful reconciliation since 2000.

The outcome of the election was so obvious to South Ossetian voters that Tibilov came to the CEC press center immediately after midnight to thank his voters. He also thanked his opponent, David Sanakoyev, noting that the two candidates had signed a deal to refrain from smear campaigns and that Sanakoyev had kept his promise. “I appreciate him,” Tibilov said of his opponent, “and will offer him a place on our team.” The newly elected president’s main objective is to unite a people split by the elections, which have been going on for six months.

Sanakoyev, arriving at the press center just after Tibilov was smiling and did not look depressed. “We don’t believe we have been defeated today,” Sanakoyev said. “About 45 percent of the voters cast their votes for us, which is a lot. If we lose heart, we will never succeed. We have to keep working to address the problems that have accumulated.” He congratulated his opponent on his victory and confirmed that the elections had been legitimate. Asked whether he would accept Tibilov’s proposal to cooperate, Sanakoyev responded that he would discuss this possibility with Tibilov and his supporters.

Meanwhile, experts argue that the end of the election campaign and peaceful rhetoric by the candidates only guarantee a short respite from South Ossetia’s many problems. “We won’t be able to make all changes fast,” said opposition leader Roland Kelekhsayev. “But society wants fast changes. So, in a couple of months, people will start criticizing the new authorities, and a lot will depend on the team and its concerted actions.” “It will be very hard for the new president,” said public figure Vyacheslav Gobozov. “People will keep an eye on all the appointments, and the first one they don’t like might generate protest.”

Many in South Ossetia fear that representatives of the former government will return to power, because the party that holds the majority in the local parliament still supports former President Eduard Kokoity. Experts believe this to be reason enough for the country to modify its political system and are encouraging South Ossetia to simplify the registration of political parties and give new political forces a chance to take part in the parliamentary elections slated for 2014.

Experts from Institute of CIS Countries explains why Tibilov won the presidentila elections.

Vladimir Zharikhin, Deputy Director of the Institute of CIS Countries

“When electing their president, the people mostly focused on the problems of corruption and misappropriation of funds. It is no coincidence that they elected an official from a security ministry, a KGB chief, instead of the presidential human rights ombudsman. Yet this was not a noncompetitive election, because Tibilov did not poll 80 percent, but had a margin of just a few percentage points. The number of votes polled by the ombudsman shows that civil and political rights are also of vital importance to South Ossetian citizens.”

Felix Stanevsky, Head of the Caucasus Department at the Institute of CIS Countries

“Tibilov was backed by former opposition leader Alla Dzhioyeva’s supporters, which is good. This means that the conflict that followed the November election might have been resolved. I hope that Tibilov will incorporate some of her people into his government in order to rule out the sense of conflict that has prevailed in South Ossetia since the November election [which Dzhioyeva won].”