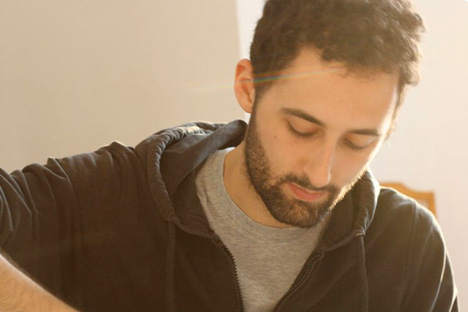 Alexis Gaden: “Small things can greatly improve the quality of life. I am confident that right now it’s necessary to draw people into the development of the [Moscow] city with the participation of architects and politicians – then the real dynamics w

Russians are voting on the Moscow City Architecture Committee’s website for the best project to develop the site of the demolished Rossiya Hotel near the Kremlin. The competition will run through April 20. One of the participants who created one of the 118 concepts – 25-year-old architect Alexis Gaden of Lyon – explains why he wants to work in Moscow and what he hopes to change in Russia.

Alexis Gaden, an engineer and urban planner by training, will receive his Master’s degree from the Lyon School of Architecture this July. He sent his project for the territory of the demolished Rossiya hotel from France after learning about the contest on the Internet. “When I learned about the contest, I didn’t think twice about participating in it. It was a spontaneous action and I was just drawn to it,” Gaden said. The architect is open-minded about the public nature of the contest, and he is optimistic about his chances. “Look, we have the right to dream. In general, the global challenge of the architect is to force citizens to use their imagination. So why can’t he dream? I am very much in favor of the open voting system for this project,” Gaden said.

Related: The authorities seek an alternative to the Rossiya

He is very serious about his own project and is surprised by the “unexpectedness” of many of the other contestants’ concepts. “I tried to create a space that the city and people need, a place where they can develop the civic projects that are now appearing in Russia. The new initiatives, like walking tours through the old city, seem to me a purely Russian phenomenon of recent times. The right park itself changes a city. For example, a few years ago in the center of my hometown, Lyon, they built a huge park near the river where a parking lot used to be. Now similar projects are popping up all over the place. The image of the city is completely different,” he said.

Gaden avoids describing his Moscow project, since anonymity was one of the requirements for all the participants. He mentions only that his concept includes an open-air pool that will operate in the winter, as well as a greenhouse and a promenade deck at the top of a glass building overlooking the center of Moscow.

The French architect’s love affair with Russia began with a trip to Samara eight years ago. He remains interested in Russia and likes to travel around the regions. Gaden is interested in the architecture of Nizhny Novgorod, Anapa, and the city of Nerekhta in the Kostroma Region, but he has no plans to design projects for these areas. “Nothing can compare to Moscow. Here there are real problems and rapid development.  It’s obvious that Moscow is facing serious challenges. And it is an architect’s dream to be a part of it,” Gaden said.

He agrees with President Dmitry Medvedev’s plans to expand the Russian capital.

“I think this project has real potential and is a field for the exchange of experience: many French specialists are participating in it. France too, at the behest of its president, once implemented the ‘Big Paris’ project. For the most part, it related to communications and in fact it became a way to transform the city into a place where new ideas were born. Paris, just like Moscow, has grown in a chaotic fashion; it has turned into an urban heap with innumerable problems and lost its identity. I think people need to feel connected to the territory where they live, and learn to understand it,” Gaden said.

Although Gaden pointed out Moscow’s problems with pollution, traffic and uneven growth, he says the capital’s main problem is its residents’ persistent dislike of where they live. “I’m fed up with Russian people complaining about Moscow. They’ve got no idea, and they are constantly asking me why I want to come to ‘crazy’ Moscow,” he said. Gaden is convinced that the people need to be taught to love their own city, to properly use it and change it themselves. “Small things can greatly improve the quality of life. This process is likely already underway. A number of interesting initiatives have emerged in the city, such as the development of walking tours that introduce people to the cultural heritage of Moscow. We don’t really have this in Europe. I am confident that right now it’s necessary to draw people into the development of the city with the participation of architects and politicians – then the real dynamics will begin.”