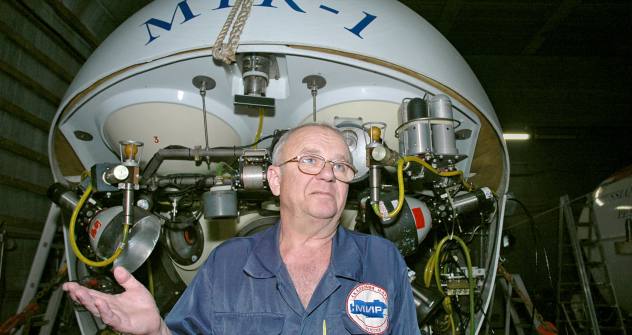 Anatoly Sagalevich has visited the wreck of the Titanic more than 50 times. Source: ITAR-TASS

Anatoly Sagalevich, a hydronaut, has visited the wreck of the Titanic more than 50 times. On a trip with James Cameron, he suggested the director make a great love story…

On April 15, 1912 the world was shaken by the news that the Titanic, the most scientifically and technologically advanced ship of its time, hit an iceberg and sank on its maiden transatlantic voyage. On the eve of that memorable date, RBTH correspondent Ilya Stulov interviewed the man who knows more than any other about the secrets buried on the ocean floor. Anatoly Sagalevich, a hydronaut and Hero of the Russian Federation, has dived to the remains of the Titanic more than 50 times.

Russia Beyond the Headlines: You have explored the site of the legendary liner’s wreck many times. Do you remember your first impressions of the Titanic?

Related: A Russian who discovered the Titanic

Anatoly Sagalevich: You don’t forget something like that. It was July 1991. I was working on the film “Titanica” with Stephen Low at the time. What I saw left me in complete awe. And to this day, every time I go on an expedition to the ship, I am overcome with the same feelings. Two parts of a huge hull lying within about half a mile of each other. The space between them is strewn with randomly scattered objects. On the first expedition, we used bottom beacons to reach the bow part of the liner. I immediately identified the tip of a broken mast with the “crow’s nest,” the misshapen platform of the lookout man who was probably the first to see the ship’s impending destruction. The hold had been turned upside down and you can see the frames of cars that probably belonged to the rich passengers. Then there was the starboard lifeboat deck. Through a ripped side, I could see inside Captain Smith’s cabin, his bathroom and his bed. The officers’ cabins are separated from the outside world by square portholes. In short, every detail and every new angle revealed traces of a sudden tragedy. I have seen many shipwrecks at the bottom of the sea. But the Titanic is truly the epitome of great human disaster, woven together by the hundreds of individual tragedies of its passengers. Nobody that night could have imagined that such a super-modern ship was in any kind of danger. As it turned out, the Titanic’s maiden voyage, with its creator on board, was also its last. Humanity paid a price for its arrogance.

RBTH: What is the present condition of the liner’s remains?

A.S.: We last went to the Titanic in 2005. Time has taken its toll on the superstructures, of course, but the hull is in much better condition. It is well preserved. The only changes in the interior are the memorial plaques fixed by the hydronauts who visit the wreck. The first one was left there in 1986 by our American colleague Robert Ballard, who had determined the exact spot of the disaster and was the first to reach the wreck in his Alvin submersible. That tradition was picked up by other deep-sea explorers.

RBTH: When did James Cameron come up with the idea for his blockbuster film about the Titanic?

A.S.: It all happened before my eyes. Jim and I met during the premiere of Stephen Low’s “Titanica” in April 1992. It was then that Cameron said he would like to make a film about the disaster. Jim wanted to look at the deep-water submersibles that were used to make unique shots. In general, he likes to get to the nitty-gritty of things. So, a couple of months later he flew to Russia, inspected our mother ship the Akademik Mstislav Keldysh and our twin Mir submersibles, and that reinforced his desire to make a feature film. Jim shared with me his main doubts. Underwater footage alone was not enough. A good, gripping plot was needed. But he did not even have a leitmotif. As someone who was observing dramatic turbulent change in his own country, I advised Jim: the world is tired of blood and violence, cruelty and petty rivalries. Why don’t you show noble relationships between people and romantic love? We had an exchange that I think both of us will always remember. “What is love as you understand it, Tolya?” Cameron asked. I thought and answered “Love is like flying.” Jim flew back to the States. We exchanged fax messages from time to time. The Mirs had a lot of work to do and so too did the creator of “The Teminator”. Two years later, after we had completed our expedition to the Komsomolets nuclear submarine and it seemed that the idea for the film was dead and buried, my telephone rang. It was Cameron: “Tolya, we’re on. Let’s get to work.” Routine preparations on both sides began.

RBTH: What preparation was that?

A.S.: Some people think that it is all about reaching the target area, diving in a specific spot and shooting some footage. But that is not the case. It is not enough to prepare and test the equipment. We had to push the envelope in terms of science and technology in order to ensure successful dives and get quality shots. Just to give you an idea, the undersea work, including submersion and surfacing time, takes several hours. But the camera has only enough film to last a few minutes. A Panavision camera was redesigned specifically for the film. And Kodak made film a third the thickness of usual film on Jim’s commission. In spite of all this, the camera had only enough film to last 20 minutes. So, we had to be very efficient shooting the film.

We had a meeting before every dive and used the mock-up on the Keldysh deck to rehearse the interaction of the twin Mirs. We knew, though, that, in spite of all the planning on the surface, the deep would present us with many surprises in the shape of currents, bottom sediment and the like, and we would in any case be forced to improvise. So when we submerged, we first rehearsed and synchronized all the maneuvers before we began filming.

RBTH: Did Cameron often dive with you?

A.S.: Every time. During the first 19 days of the expedition we made 12 tandem dives. Initially, Jim wanted to shoot eight sequences for the film, but he ended up shooting more than 30. He worked with gusto. You should know that the temperature inside the submersible is never higher than 12 degrees Celsius, but the strain was so great that we were covered with sweat after every dive.

RBTH: Would it be fair to say that after shooting “Titanic,” Cameron was hooked on the deep sea?

A.S.: Yes, that was indeed the case. Jim went on to make several more popular science films together with the Mir’s crews. He came up with the idea to make a new deep-water submersible and invested, I think, $12 million in building the Deepsea Challenger. It was built in Australia and took eight years. And, in late March, it went to the bottom of the Mariana Trench. A genius is a genius in everything. So we hydronauts see him above all as a colleague with a good grasp of the trade.

RBTH: Should the alarm bells be ringing for the Mirs? In the sense that “we’ve already got our own equipment. We don’t need yours anymore.”

A.S.: I doubt it. The Deepsea Challenger can indeed dive much deeper. But it is a tiny craft for just one person. Imagine a capsule 109 centimeters [43 inches] wide. How can you work inside it, especially for several hours? By the way, shortly before his record dive, Jim shared his plans to build a three-seater submersible.

Today several countries can boast deep-water submersibles, but the Mirs remain unsurpassed on many tactical and technical counts. China is testing a deep submergence vehicle and in America, the super-modern version of Alvin-2 is about to be finished. But I don’t think we’ll be out of a job any time soon. Speaking about alarm bells, though, they come, oddly enough, from a different quarter.

In this country, we often encounter a very strange attitude to hydronautics. Russian officials recently decided that our work is nothing more than commercial lease. For more than 20 years, the Mir laboratory paid its way. We maintained a staff, repaired the craft and kept the support vessel in order. All this was financed with money we made during expeditions. And, of course, each expedition fetched priceless scientific materials and unique samples. Our explorations generated 16 monographs and more than 800 articles translated into many languages. All this was the result of our participation in international expeditions. If we had just subsisted on government budgeting, the chances are Russia would never have had hydronauts or Mirs.

Now the rules of the game have changed. The bureaucrats will evaluate the cost of time renting the Mirs and then announce tenders. What does that spell? First of all, it will disrupt research programs. And how can we assess the damage caused by such innovations?

You see, every expedition has to be prepared. The mother ship, the Mstislav Keldysh, has been in Murmansk for more than two years, also due to commercial considerations. It is busy only one month during the season. The area that accommodated the Mirs has practically been destroyed. It will take time and at least $360,000 to restore it. But no one will invest a kopeck until after the tender. And you can understand why.

RBTH: It has been 100 years since the sinking of the Titanic. Are you planning an expedition to its remains?

A.S.: It all hinges on how quickly the Moscow Property Department and the Russian Property Agency calculate the tariffs and hold tenders. Our German partners want to organize dives with Mirs to the wrecks of the Titanic and another famous ship that sank during the Second World War,, the Bismarck. We were told that it will take at least two months to prepare the auction. Then preparations for the expedition can begin. So, it’s still very much up in the air as to whether we will be able to go on another expedition to the Western Atlantic this year.