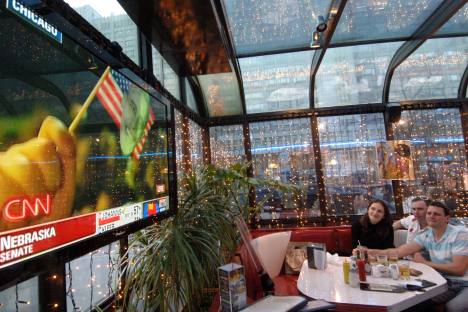 The diner in Moscow has become an iconic place for Americans. Source: RIA Novosti / Sergei Pyatakov

When Americans visit Moscow, they want both a taste of home and things that seem slightly exotic. Shawn McKenna brought American-style dining to Russia’s capital. He and other American expatriates share their favorite Moscow places.

Moscow’s first American diner was shipped to Russia in parts, much like a recycled amusement park ride. Muscovites lining up in the snow outside the Tchaikovsky Concert Hall noticed one day that a diner was appearing piece by piece, like a stamped-tin and chrome Lego fortress, right in the heart of Moscow.

It is hard to describe the buzz the Starlite Diner caused when it opened its doors in the mid-1990s. Today, it still draws a cult of devotees with its bacon grilled cheese sandwiches, chicken pot pies and other American novelty foods that predate the term “bad cholesterol.” It took four weeks to teach the menu to the first wave of Russian waitresses, who wore uniforms straight out of the TV show “Happy Days.”

Suddenly, business deals were being consummated over French fries and ketchup. As expatriate families arrived in Moscow, the restaurant became their first stop after Red Square. Those were heady days for international relations between the West and Russia, and American expats were streaming in — from brigades of consultants and businessmen, to herds of journalists and academics, as well as missionaries, students, poets and dreamers.

Moscow attracted adventurous people who were taken by its energy. Shawn McKenna, one of the founders of Starlite Diner and other restaurants in Moscow, was among the first of these pioneers, and also among the longest lasting.

“I like the vibe and trendiness of the city, the economic development of the entire population, and that it is a melting pot of different nations and regional cultures of Russia,” McKenna said.

In his earliest visits to Russia, he identified a niche. McKenna experienced the sometimes amusing, always frustrating lack of good service in restaurants in the 1990s. “One time our delegation drove to a Georgian restaurant on Tverskaya, which turned to be closed for guests due a lunch break of their employees,” he said. “That’s when I realized how much opportunity lies here.”

By the mid-1990s, he had started his own restaurant business, bringing the classic diner experience to Moscow. Initially, 95 percent of his clientele was made up of expatriates. Today, Starlite Diner serves authentic burgers and milkshakes to mostly Russian customers.

The diner concept also attracted young Russians on a budget. While Moscow gradually grew into one of the expensive cities in the world, McKenna’s restaurant cultivated the Russian middle class with the idea that something could be trendy and cheap at the same time. Said McKenna, “Focusing on Russians brings the success in the long term.”

Shawn McKenna spends a lot of time in his own restaurant when he’s in Moscow, but still has a soft spot for the famous Izmailovo Vernisage souvenir market on the outskirts of Russia’s capital, which sells everything from old Samovars to DVDs and is home to the city’s Vodka Museum. “When family and friends come, you have to descend to the class of tourists,” he said. “I love the Izmailovo market, the whole experience of bargaining like in the old days in the epicenter of the flea-market society of Moscow, surrounded by this entrepreneurial spirit.”

Chris Lee, President of C.B.S.D. Thunderbird Russia, agreed:“In addition to the kebab you can find at Izmailovo, Moscow has a wealth of foreign cuisine you won’t find in the States. Georgian food is something most Americans have never encountered, but that everybody loves. I personally recommend Tiflisky Dvor on Ostorzhenka Street.”

To get away from the city’s notorious traffic, Lee recommended night driving. “The lighting and architecture of Moscow are an amazing combination. We go up to the Sparrow Hills and Moscow State University to get a view of the city. Christ the Savior Cathedral is one of my favorite places to take guests at night. We’re a middle-aged couple with kids, so no night clubbing!”

Karl Swanson of Natura Foods was on the train to Moscow’s Domodedovo airport to pick up relatives visiting for the first time when he said,“I want to give the kids a sample of typical Russian culture. The Pushkin Museum is nice, but maybe a little early for them. That’s why we’re visiting the Moscow State Puppet Theater and the Moscow Nikulin Circus — they’ll be absorbed in a Russian story and surrounded by a Russian audience.”

American journalist Alec Luhn in fascinated by Moscow’s history. “The best place to get in contact with Soviet architecture and ideology is VDNKh [the All-Union Exhibition Center, a park with pavilions showing the agricultural achievements of the Soviet republics] and the Sovetskiye Vremena [Soviet Times] restaurant. I like going to VDNKh because it’s a place steeped in history,” he said. “Today, the Soviet Union seems strange and archaic, but at one point its ideology completely defined the lives of millions of people, even dictating the way the buildings around them looked. VDNKh creates a physical connection with that world and helps you feel it in a more visceral way, and it’s authentic — not some theme-park recreation.”

Eric Leroy, a longtime English teacher in Moscow, appreciates the city’s inhabitants. In an interview with Afisha magazine, he said, “Moscow’s charm is in its people. I love Russians. I had so many questions before coming here, and everyone told me life in Russia would not be easy. But the opposite turned out to be true: I came here and immediately felt at home. There’s some mixture of coldness and rudeness with warmth and spontaneity here that I really love, and with my Russian wife, I’m at home here.”