The cold market for haute cuisine 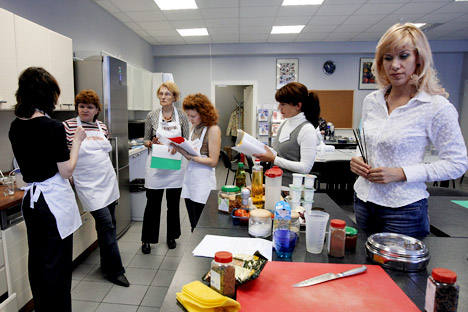 Even as Muscovites flock to cooking schools too few entrepreneurs are taking advantage of the demand in this segment.

Cooking schools have taken off in Moscow with more and more Muscovites opting for an evening spent kneading, basting and beating as an alternative to dinner and a movie. For some it’s a new and interesting way to go out and meet people, and for others the courses are a good hunting ground for finding a life partner. But regardless of the motivation of the participants, the number of classes has not caught up with demand, so the market is virtually competition free.

“The market for cooking courses cooled down during the financial crisis. This business really flourished around 2003-2005, when cooking schools were popping up all over the place. But the crisis seemed to kill off nearly all the competition. There are still a few courses where the lady of the house will teach you the correct way to boil up a pot of semolina or peel a potato, and then there are also professional training colleges; so my school is really the only one of its kind,” said Pavel Rogozhin, owner of the Pro.stranstvo cookery school. Rogozhin has modeled his business on European cooking schools, where haute cuisine dishes are prepared in a slick, highly disciplined environment, under the direction of a well-respected master chef.  “All my courses have strict rules about behavior: no small-talk, no chatting on your mobile phone. As soon as a client enters my school, he or she will be given ingredients, utensils and instructions, and then they’ll busy themselves by a kitchen worktop for four hours at a time. People come to me to work and to learn – anyone who wants to mess around and socialize shouldn’t bother signing up. This is a school, not a club.”

The strict rules mean that this particular school attracts a certain type of client; according to Rogozhin his school is generally frequented by wealthy people over the age of 35, who come here to learn to cook delicious, sophisticated food for themselves and for their families. Many of them have taken cooking classes in Europe and are looking for a similar experience in Russia. And the menu is tailored to this type of client. As a rule they, learn to make recipes involving seafood, expensive cuts of meat, intricate sauces and desserts with exotic ingredients. Rogozhin made a conscious decision not to concentrate on the cuisine of any particular country. “People don’t want to limit themselves to just Spanish or Italian cuisine. The main request I get from my clients is to show them how to make good home-cooked food – recipes you can do at home that don’t require too many special skills,” Rogozhin said.

Although Rogozhin is working at the top end of the market, he doesn’t consider his business a success: “In Moscow the average price for one lesson is between 100 and 200 Euros. But this price is the same as it was in 2005! We need to put the cost of one lesson up to around the 300 Euro mark in order to stay in the black. But this would kill the business – psychologically people aren’t prepared to go above a certain price. And 200 Euros is just about the maximum we can charge.”

To keep his business going, Rogozhin has had to negotiate with sponsors, and it turns out that producers of home-appliances and kitchenware are only too happy to provide their support. The deal is that the school can use their products free of charge on condition that the companies’ logos are prominently displayed. Another way to cut the running costs of the business is to make contracts directly with alcohol and meat suppliers (who also tend to be more flexible in pricing). This allows the school to avoid buying ingredients in supermarkets at the normal retail price. “If we can agree on price reductions this is a huge plus for the business,” Rogozhin said. “Food costs eat into between 30 and 50 percent of our income. Another 50 percent goes to rent. So our only way of making money is to save on alcohol and ingredients.”

And of course it’s also important to attract as many clients as possible. According to Rogozhin, his school hosts up to 20 events each month – master-classes for groups of 4-5 students, as well as corporate evening events. The school sometimes gets so busy that he needs to hold courses in two shifts – morning and evening. However this influx of business only really happens around the winter holidays when there is a big demand for office party venues, on top of lessons for private clients. But Rogozhin says it’s not often that his company is so rushed, than generally his type of business does not generate a constant stream of custom.

A constant influx of people, lively parties and massive crowds is more the scene of another well-known player in this market – the gastro bar Akademiya Del Gusto. This school opened its doors in 2008, just when the credit crunch took hold, and it became the first of its kind. According to the business’s customer relations manager, Evgenia Belkina, Akademiya’s philosophy is all about having fun: “We host all kinds of different events; master-classes, office parties, and team-building. The thing they have in common is a relaxed convivial atmosphere: people come to us to taste the spirit of Italy, drink wine, cook up a delicious meal and then eat it, and gain huge pleasure and satisfaction from the whole experience.”

For 5,500 rubles (150 Euros), taking part in an event at Akademiya Del Gusto does not come cheap, but nevertheless, it is not easy to get into a course – some of the seminars have waiting lists of more than 5-6 weeks. Belkina will be the first to admit that her business does not revolve around private clients – their main source of income comes from contracts with companies: among Del Gusto’s main clients are an international fizzy drinks manufacturer, several European fashion houses and a few big Russian companies. “Our busiest time is probably around the build-up to New Year,” Belkina said. “In December 2011, for example, we didn’t have a single day off – we hosted more than 30 events.”

The success of the business is clear by its location: Del Gusto rents a 300 square meter building on Tverskaya Streets, sometimes known as Moscow’s Fifth Avenue. Belkina claims that Del Gusto does not have to worry about competition. “Now Yulia Vysotskaya [an actress, wife of the director Anton Konchalovsky] has opened her own school, and maybe she’ll manage to shake up the market a bit. But at the moment there’s no competition at all,” Belkina said.

Neither Belkina nor Rogozhin are able to explain why this is; in Moscow there are apparently no bureaucratic hurdles to deter people from entering this industry: for registration purposes cookery schools are categorized as caterers, on a par with cafes and restaurants, and they need only to conform to the same health and safety standards. Only Rogozhin was able to come up with one possible reason for the lack of competition on this market: “Banks won’t lend to someone wishing to set up a cooking school because this business is so unpredictable – with sharp bursts of activity over the winter months and a very uneventful summer. No bank is going to give money to an organization with a business plan like this. So it’s only possible to open a school using your own personal savings.”

But there is another way to cash in on Muscovites’ growing interest in European cuisine, and this one avoids the risk of financial ruin: Eager to get their slice of the cooking-school pie, many restaurants have now started to offer cooking courses taught by the cooks and chefs who work in them. Today more than 20 eating establishments in Moscow offer customers lessons in how to cook for themselves, and, unlike the market for independent cooking schools, the choice of formats, dishes, and prices are very varied: ranging from courses costing 500 rubles (15 Euros) where budding chefs learn how to make their own pelmeni and fry up an omelette, to serious sushi-making courses for children costing 150 Euros.

“These courses are great for boosting a restaurant’s image: the owners can open their doors and invite the customers in, let them look around the kitchen, get to know the chefs, see for themselves how clean and tidy everything is and what sumptuous ingredients go into the meals they eat. It’s not so much a money-making venture, as an opportunity to show the clients how much you care about them,” said Tatiana Potochnikova, founder of the Cooking Men courses at the Sisters Grimm restaurant. Potochnikova’s course is one of the most popular in Moscow, and has long been a business in its own right - much more than a mere attachment to the restaurant. “Exactly a year ago we decided to hold courses just for men. We never dreamed it would take off like this. It was March, the time of year when everyone starts spending time at their dachas, and we decided to teach the stronger sex how to master the art of barbequing, and the best way to choose meat for making shashlyk [Russian kebabs].”

The course was well-promoted and well-priced (coming in lower than the average market rate at 50 Euros) and this is what guaranteed the project’s success. And the restaurant has profited, too. According to Potochnikova, not only does the cooking school bring in a tidy income on its own, it has also substantiated the turnover of the restaurant itself – as soon as the master-classes went on offer there was a marked increase in consumer traffic. Potochnikova believes the custom will keep coming: “I think our project is just at the beginning of its journey – I think it will remain popular for at least another year. It’s hard to say what the next stage will be: the mood in Moscow changes very quickly, and in this city you have to constantly adapt, change, and think up new ideas to stay ahead of the game”.