Rosneft and Exxon converge around the shelf 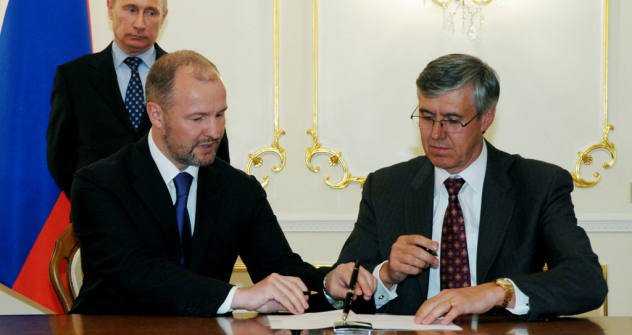 On April 16, Rosneft and ExxonMobil moved forward on their agreement made last summer to cooperate in developing the energy resources of the Russian continental shelf. Representatives of the oil majors signed several agreements, including one on the establishment of two joint ventures for work on the Black and Kara seas and on the purchase by Rosneft of shares in three Exxon projects in North America.

Because work on the shelf requires considerable investment, Rosneft invited other major oil companies, both Russian and foreign, to participate in joint development of 12 blocks.

Oil and gas head up and east

Deputy Prime Minister Igor Sechin, who is the administration official in charge of Russia’s energy development, said that according to preliminary estimates, at least 15 offshore platforms will be built for the deposits in the Kara Sea alone. “The resource base allows us to hope for success, but its costs will be high, because the working conditions are difficult,” Sechin said.

The preliminary assessment for the Kara Sea project is $200-300 billion, and for the Black Sea, about $55 billion. Drilling of the first exploratory wells in both the Kara and Black Seas is scheduled for 2015.

Prime Minister and President-elect Vladimir Putin, who was present at the signing, expressed confidence that the cooperation between Rosneft and ExxonMobil will last for decades. "I expect ... that the initial projects will be large-scale," he said.

Rex Tillerson, President and Chairman of the Board of ExxonMobil, said that the agreements reached will help the company expand its presence and work in the Black and Kara seas while ensuring Rosneft's presence in the U.S., Canadian, and other markets.

According to the agreements, a subsidiary of Rosneft is acquiring a 30 percent stake in ExxonMobil's La Escalara project in the Delaware Basin in West Texas. The Russian company also won the right to acquire 30 percent of 20 blocks owned by ExxonMobil in the western Gulf of Mexico.

Another subsidiary of Rosneft will take 30 percent of ExxonMobil's stake in the Harmattan acreage of the Cardium formation in the Canadian province of Alberta, which are unconventional gas reserves. According to Sechin, these projects are already underway, and negotiations are now proceeding about the price of the Russian company's participation. He did not say anything more specific about the timing of completion of the transactions.

The parties also agreed on joint development of technologies for extraction of difficult-to-recover oil reserves from the Achimov and Tyumen formations in the Prirazlomnoye, Mamontov, and Priobskoye fields in Western Siberia. In the future they will begin to discuss joint projects to develop difficult-to-recover reserves in this region.

ExxonMobil also signed two memoranda of understanding with Rosneft and other major Russian companies, on proposed cooperation for infrastructure development projects in the energy sector. These refer particularly to orders for equipment, supplies, and joint construction of working facilities.

Rosneft sent a proposal for joint development of 12 blocks of the shelf to the main private players in the Russian oil industry – Lukoil, TNK-BP, Surgutneftegaz, and Bashneft. Eduard Khudainatov, the head of Rosneft, reported that similar letters were sent to some foreign companies, but he did not provide details.

The proposal included blocks in the "gray zone" near the Norwegian shelf and blocks on the Magadan shelf. Responding to a question about what resources the 12 blocks contain, Khudainatov said, "We are offering the best and the richest." He specified that cooperation presupposes financing of the work by the Russian companies.

A representative of Bashneft said that the company acknowledges receipt of the letter, and its leadership has already begun to study the proposal.

According to Khudainatov, the conditions proposed are similar to those between Rosneft and ExxonMobil – a 30 percent share. The offer was made on Putin's instructions, after a meeting on the development of the shelf last week, Khudainatov added.

The Prime Minister said at that time, that for the most difficult projects in the Arctic, the tax on extraction of minerals could be only about 5 percent of the selling price of the products.

Additionally, a proposal is making the rounds that would eliminated the property tax and VAT for imported equipment needed for all new projects, regardless of difficulty. These conditions would remain in force for 15 years after the start of commercial production. New projects on the Russian shelf will also be exempted from export duties.

Sechin said that the order on preferential taxation of projects on the Russian shelf has already been signed, which, in his view, makes such projects effective.

Meanwhile only companies that are more than 50 percent state-owned and have at least five years of experience on the shelf have the right to develop the shelf of the Russian Federation. In fact, only two public companies, Gazprom and Rosneft, may work on the shelf.