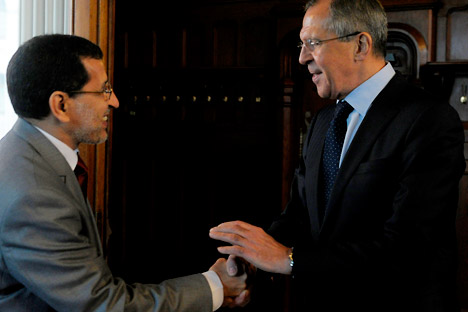 Russian Foreign Minister Sergey Lavrov, right, shakes hands with Morocco's counterpart Saadeddin al-Othmani in Moscow on Wednesday, April 18, 2012. Lavrov warned that only the U.N. Security Council has the authority to evaluate the fulfillment of Kof

Russia is still trying to establish a dialogue with Syria’s opposition.

Last week Russian Foreign Minister Sergei Lavrov said: “The armed Syrian opposition is committing provocative acts seeking a return to violence and an end to the cease-fire in order to have a reason to ‘bury’ Kofi Annan’s plan.” Yet despite these serious accusations, Moscow is trying to open a dialogue with the Syrian opposition, above all the groups calling for a political settlement in Syria.

Lavrov added that Moscow is constantly “calling on all powers that have leverage with the Syrian opposition, especially the armed opposition, to exercise it for the good of the Syrian people and demand that no provocations be permitted and the cease-fire respected.”

These appeals are addressed primarily to the United States and Western Europe. While supporting the peaceful settlement plan for Syria elaborated by UN envoy Kofi Annan and approved by the UN Security Council, they are providing financial and political support for the Syrian National Council (SNC), which is based outside the country and wants external military intervention.

The SNC has not officially agreed to Annan’s plan and will not engage in political dialogue, saying that it will not negotiate with Syrian President Bashar Assad. Yet Annan’s plan hinges on dialogue between the Syrian government and the entire range of opposition groups.

Aware that the West will not encourage the opposition to negotiate, Moscow is trying to establish contacts with constructive opponents of the Assad regime independently. On April 17, the Russian Foreign Ministry reported on Lavrov’s meeting with a delegation of the Syrian National Coordination Committee for Democratic Change (NCC).

The NCC, which includes secular, left-leaning parties as well as nationalist groups, is a key faction of the Syrian opposition alongside the SNC. Unlike the latter, however, the NCC is based mostly in Syria, pursues political dialogue aimed at reforming the Syrian political system and campaigns against foreign intervention.

According to Deputy Foreign Minister Mikhail Bogdanov, another Syrian opposition group is expected to visit Moscow during the final week of April. The delegation will be headed by a leader of the Popular Front for Change and Liberation, which also represents the domestic Syrian opposition.

A delegation of the Popular Front paid a visit to Moscow last October; it became known abroad when it refused to take part in the first meeting of the “Friends of Syria” in Tunisia. At the time, Popular Front leader Qadri Jamil said: “The purpose of this meeting is not to deal with the Syrian issue, but to play as a media campaign for Western countries, headed by the United States, to find ways for foreign intervention.” The Front claims to represent the silent majority in Syria and has set itself up as an intermediary between the authorities and dispersed opposition forces.

“The main problem of the Syrian opposition is that it has no charismatic leader capable of controlling the leaders of various ethnic groups and tribes, as well as political groupings,” said Yevgeny Satanovsky, president of the Middle East Institute. “For instance, Burhan Ghalioun, the formal leader of the SNC and a Europeanized intellectual, admits that he has only little personal authority in Syria and the SNC.”

According to Satanovsky, the NCC, which operates inside the country has certain legitimacy to hold negotiations with the Assad regime, as its leaders are totally opposed to foreign intervention. In his opinion, the NCC has a better chance of engaging in domestic reforms than the forces supported by the West.

“Yet the main problem is that the almost $1 billion invested in the campaign against Assad will sustain the civil war for a long time. The money is being invested in confrontation, rather than reconciliation,” Satanovsky said.