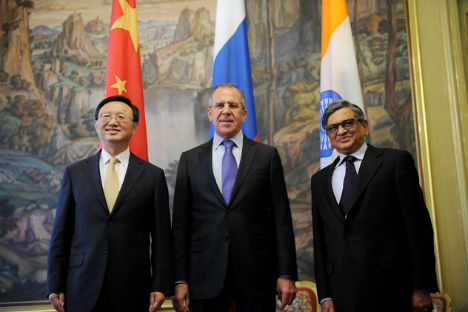 The Russia-India-China trilateral is an idea whose time has come, and will become increasingly more important in setting the global agenda, says Nivedita Das Kundu.

The international balance of power is changing in favour of world peace. Russia, India and China (RIC) have been interacting trilaterally since 1996. The 11th round of the Russia-India-China (RIC) Foreign Minister’s meeting was held on April 13, 2012 in Moscow. The impetus of the RIC Foreign Ministers’ recent meeting was strengthened as it was held within a fortnight after the March 29 BRICS summit in New Delhi. RIC’s main agenda have been to oppose unilateralism and to promote a pluralistic democratic international order.  The three countries believes that the diverse threats and risks cannot be addressed by military power alone but need to be appraised through political, social and economic prisms.

Read more: Russia as a “third force” in the strategic confrontation between India and China

Russia-India-China’s possible axis formation is an important political idea that emerged in the post-Cold War period. It was advocated by Russian President Yeltsin in 1993 and Prime Minister Yevgeny Primakov in 1996. Indo-Russian, Sino-Russian and Sino-Indian relations have begun to unfold a new trend now. If this trend continues it will stimulate the process of multi-polarity which will be of far reaching significance for the international relations. Countries like Russia, India and China need a multi-polar world in order to promote their national interest across and autonomy of decision-making. To construct a multipolar world, the Russia-India-China triangle would be indispensable. Although there are some unresolved issues between these countries, the movement towards a better understanding between these three states is evident. The relations between the three flourished during the cold war period. Even after the end of the cold war, the relationship was maintained as Russia proved to be India’s tested and trusted friend. Similarly, China-India relationship became smoother in the eighties and after the 1993 accord the economic relations acquired an added momentum. The three countries have many converging interests that could add substance to trilateral cooperation. They back the primacy of the United Nations in solving crises and support the principle of non-intervention in internal affairs of sovereign states. In the long term, it is the mutual confidence which will help these three powers to play a larger role in global politics and to respond jointly to the challenges of the new century. There is, however, a need to coordinate the actions as the international environment has become more intricate and complicated. The commonality of key national interests and the long-term friendly relations in the field of culture, economy and science & technology create a real possibility for cooperation between these three great powers.

The three nations share wide-ranging interest on many major international issues, and are committed to build a just and fair, new international political and economic order. There are advantages of trilateral cooperation despite the obvious asymmetries, given the fact that they are amongst the world’s largest continental-sized entities and civilization states.

All three countries have had a long history of interaction, exchange, cooperation and close relationships. In the post-world war II period, there have been phases of tremendous warmth and bonhomie among them. There have also been periods of near-total breakdown and actual hostilities, as happened during the 1962 India-China war. However, what has become clear to all three is that any restructuring of relations would be based on a qualitatively different strategic reality. There is, for instance, no doubt that there could be no resurrection of any kind of alliance relationship clearly directed against or targeting any third country or any agreement offering unconditional support to the other.

One of the major areas of cooperation for the three countries is energy security. Russia is an energy surplus country, whereas, China and India are energy- deficient. If these three states can work together, they can invest in joint projects that could facilitate the flow of oil and gas from Russia into China and India. The trilateral cooperation can improve the overall energy security scenario in Asia and the world.

They can also cooperating in combating separatist movements. With each other’s cooperation, they can refrain from supporting these movements in each other’s country, exchange their experience in solving ethnic problems and can cooperate in opposing terrorism and extremism.

Sustained economic development of Russia, India and China has become the engine of global economy. There are many similarities in the socio-economic conditions of the three countries and the way they are responding to globalization. The prospects of cooperation in technology, energy, raw material etc are extremely broad. The population of each country should recognise the benefits of Russia-India-China cooperation so that it could gain popular support. Globalisation offers new opportunities and brings new challenges to China, India and Russia. In order to realise the opportunities and to respond to challenges, there is a need for a permanent mechanism for a regular exchange of views and coordination of actions.

Read more: The import of Russia-India-China: still a valid entity?

The trilateral cooperation has made much headway in the past few years since the first meeting in Moscow in September 2001. The trilateral format was initiated by holding meetings of the ministries of foreign affairs on the margins of the United Nations General Assembly sessions in New York in the year of 2003 and 2004. A landmark stand-alone meeting of the foreign ministers was held in Russia in June 2005 in Vladivostok. As a result a clear-cut profile of the troika took shape. The agenda of the ministerial meeting in this format includes an exchange of views on key international and regional problems, including the war on international terror, illicit drug trafficking and other major challenges. The intensification of trilateral economic interaction acquired an added importance in the ensuing years. At the October 2007 meeting of three ministers in Harbin, China, the three countries provisionally divided these lines of preparation in a way that the issue of agriculture was coordinated by China, that of health-care by India, and emergency prevention and response by Russia. In February 2007 and later in October 2007 when meetings of the foreign ministers of the three countries were held in New Delhi (India) and in Harbin (China) respectively, it was decided to give a structured and dynamic character to relations in this format to promote practical cooperation. The initiation of the consultation mechanism between the heads of territorial departments of the ministries of foreign affairs of Russia, India and China became a key agency in implementing these objectives. It was decided to hold such events on a regular basis, at least once a year and since then the yearly meeting of RIC foreign Ministers are taking place regularly.

In recent years, the trilateral has been marked by closer coordination on key international issues. During the recent RIC meeting in Moscow, the three countries have taken similar positions on the issues of the Syrian crisis and on Iran’s nuclear standoff. They were supportive of Kofi Annan’s peace initiative on Syria. According to RIC, Iran has sovereign right to peaceful nuclear energy and has strongly argued for resolving this issue through political and diplomatic dialogue and through consultations between Iran and the International Atomic Energy Agency (IAEA). The RIC joint statement also reiterated their concerns on Afghanistan, where increasing focus on the exit of the International Security Assistance Force (ISAF) was discussed and RIC focused on post-ISAF exit responsibilities of these three countries. They are all immediate neighbours of Afghanistan and victims of terrorism and drugs trafficking emanating from Afghanistan.  The joint statements mentioned their commitment to ensure stability in Afghanistan and reaffirmed their commitment to contribute towards ensuring stability and security within the UN framework or through other regional initiatives, including the Shanghai Cooperation Organisation (SCO), as Russia and China are full member or observer of SCO and India is an observer. The growing closeness amongst RIC is clearly noticeable in various fora from the United Nations to the G-20 Summits, within SCO, during the Asia-Europe Meetings, during Climate Change meetings, during East Asian Summits, and so on.

There are strong complementarities among the three countries, in terms of natural resources, services capability, skilled labour, manufacturing capability, technology. They are all strong on entrepreneurial activity and in innovation and technology activities. However, the current levels of trade, investment and economic interaction between them are far below their potential. There is, therefore, considerable scope for cooperating on technology and innovation. The RIC has already set up subsidiaries like RIC trilateral experts meeting on disaster management, trilateral business forum, and trilateral academic scholar’s dialogue, and held other trilateral projects and conferences in these specialised fields. However, for all three, food and commodity security will emerge as a major concern and that is one area in which closer interaction and some understanding would be essential as the three states go forward to integrate in the global markets.

The regular meetings of the three countries’ foreign ministers are playing a key role in promoting the trilateral cooperation. The main task of the troika forum is to create a good climate among the three countries and to improve the security paradigm in the region and to strengthen mutual understanding and trust which is essential for finding the best solutions for certain problems at the bilateral level. The principles laid down in the trilateral dialogues are that of equality, mutual trust and consensus. Trilateral cooperation has gained strong momentum and as long as patience and perseverance is maintained, cooperation of the three countries will go on to scale new heights.