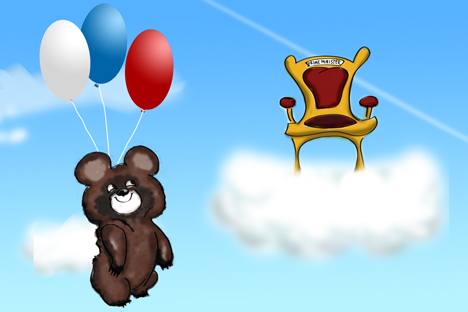 In possibly his last address to the State Council, Dmitry Medvedev announced big plans for Russia’s economic future, but as usual, the key lies in implementation.

On April 24, 2012, outgoing Russian president Dmitry Medvedev addressed the State Council for nearly an hour in the Kremlin. After outlining the “preliminary results of our joint work” in his December address to the Federal Assembly, the president said that he would now like to set out the ideology underlying Russia’s future development plans. That ideology, he said, was freedom: “A few years ago... I said that freedom is better than no freedom,” Medvedev began. He then repeated a line from his inaugural speech as president in May 2008: “I consider my most important task the development of civil and economic freedoms. More freedom for everyone – that was and remains my goal.”

Medvedev conceded, however, “poverty, underdevelopment, corruption and low life expectancy were the main enemies of our freedom.” But as he also admitted, calls for change were not enough. As every Russia observer knows, implementation in Russia has been historically problematic, and this time around will be no exception. The president virtually admitted this when he stressed that Russia was continuing its struggle against corruption by adopting various laws and signing international anti-corruption conventions, but then noted that little progress had been made – even though, he said, “corruption is actually being punished. The number of convictions is in the thousands, tens of thousands. Additional measures will be implemented to combat so-called major corruption, as well as domestic corruption.” But compared to the literally millions of cases which occur, many will doubtless continue to think the risk is worth the reward.

On the economic front, he outlined some of the problems that are holding back Russia’s development. The president’s “to do” list included encouraging entrepreneurship and improving the country’s business climate and competitive environment. Rules must be transparent and clear, and fair rules must replace personalized methods of public administration. “Yes, this, of course, requires a change in the relations between state and society in general to business. I admit frankly that this is still complicated. But I would like to name the five principles, which in my view should guide the state in making economic decisions.”

The president went on to say what Putin should have said in 2000: first, entrepreneurship and entrepreneurial talent should be considered important social values - and nothing else. Second, state intervention in the economy should be transparent and only the minimum necessary. Third, law enforcement officers must protect all forms of ownership equally and impartially. Competition based on the use of [local and federal] administrative resources and power should forever be consigned to the past. Fourth, the regulatory regime should be competitive at international level; and fifth, all stakeholders should be involved in deciding the rules of the game.

Medvedev admitted that the biggest challenge for entrepreneurs and investors was the “unpredictable intervention of some officials in economic activity, the illegal actions of law enforcement officers, who, as we know, all too often forget that their duty is to protect the rights of citizens, including entrepreneurs.”

Russia therefore has to work on three main areas. First and foremost is the further reduction in state intervention in the economy. Where feasible, said Medvedev, the government should adopt and implement a road map for the sale of state-owned companies in the medium term. At the same time, public companies should stop taking over private companies, and sell off their non-core assets.

Second, it is necessary to increase the predictability and transparency of government regulation, control and monitoring, especially of macroeconomic regulation. There is, for example, no need to raise taxes: “There are different methods and sources available to fulfill all the stated programs, primarily related to the increased efficiency of budgetary expenditures,” Medvedev said.

How this would work, though, is unclear. The president rightly noted that the volume of mandatory reporting had to be minimized, but in attacking Russia’s notorious red tape, he hit on one of the country’s main problems: “What is the point of creating tons of paper if they just gather dust on the shelves of the tax inspectorate, as we all know they do? It’s a waste of time and money. Time and money can be spent to much greater advantage.” The regime itself is creating the problems which are now choking the country.

Thirdly, Medvedev called for the implementation of plans to create some 25 million new high productive jobs in the space industry, shipbuilding, cars, pharmaceuticals and agriculture. Russia also had to use its “competitive advantages in information technology, logistics and, of course, processing of natural resources.”

Many Russians will see this as a pipe dream, given the decline in the country’s educational standards from elementary school all the way to university since the Soviet period and the recent botched educational reform. And of course, Russia faces intense competition with the much more technologically advanced parts of the West and Asia as well as the rapid rise of China and India.

In a token move away from Russia’s usual hubris, Medvedev argued that “modernization requires a close partnership between Russia and leading countries in terms of technology. I do not see anything wrong with that, to learn both economic and political skills from partners.”

But as usual, this was qualified with his statement: “We are ready to integrate more closely with the European Union, the Asia-Pacific region, BRICS countries and other regional associations, but this requires openness and trust from our partners. Our country cannot take unilateral steps toward. The movement must be bilateral.”

This sounds reasonable, but Russia’s historical lack of the rule of law and record of expropriation since 2000 have deterred countless international investors and contributed to international distrust towards the country after major international companies were driven out of prior agreements in favor of Russian national champions, not to mention the Yukos case, which simply refuses to go away.

In conclusion, Medvedev wanted “to outline the main criteria that should serve for evaluating the effectiveness of our state agencies.” Some of these involved social issues, such as targets for increased longevity, but others concerned the economy and business either directly or indirectly.

“Russia,” said the president, “should climb from its current highly unattractive 120th place on the international rankings for ease of doing business to at least 40th place, with hopes of making it into the top 20 no later than 2020. Unemployment should be brought down to a minimum level of not more than five percent within the next few years. Labor productivity – a difficult but absolutely vital issue for our country – must be raised 1.5-2-fold, thus making the Russian economy more competitive in key global markets.  This might seem a small thing, but it is very important – at least five of our universities should be on main global ratings of the world’s top 100 universities. This would be a sign of general improvement in our education system. Russia should be among the world’s top ten countries in terms of the level of penetration of electronic technologies in all areas of life. I am sure that we can do this.”

But in a veiled admission of Russia’s technological backwardness, Medvedev maintained that if even 10 percent of the more than 400 Russian companies registered under the auspices of the Skolkovo Innovation Center succeed and achieve successful innovations, Russia would have a chance to return to the world’s technology leaders. Again, implementation is key.

But besides the economic policies he announced, Medvedev made it clear that political change would continue – which will doubtless strain the system to capacity, and even beyond.

So what are the chances of seeing all, or indeed any of this implemented if, as expected, Medvedev becomes prime minster? Certainly, Russia needs to make major changes to avoid running into likely economic problems in several years. And Medvedev presumably ran his address by Putin.

But the biggest irony is that although “Official Russia” admits the huge problems of bureaucracy and corruption, it has largely caused the present problems itself by its own policies since 2000.

Much of what Medvedev says is therefore tantamount to a reversal of previous policies. But most Russian and international observers contend, probably correctly, that Medvedev became a lame duck as soon as he and Putin announced last year that they would swap jobs.

So once again, implementation under the new president – Vladimir Putin – will be key. Many experts, however, argue that Putin can live with the current situation, since he is convinced it keeps a tight control over business and society, and any relaxation could endanger the system.

And if the new Putin regime repeats the pattern of the first, we will again see powerful clans vying for power and influence, mainly the siloviki, who have little understanding of economics, and the liberals, who have at least some grasp of sensible finance, with Putin as “honest broker.” Hardly a system built for reform, despite the huge challenges Russia is facing.

The entire English translation of Medvedev’s address can be found on the Kremlin's website.