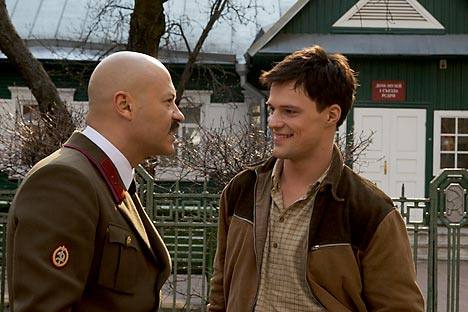 The footage from the "Spy" movie. Source: Kinopoisk.ru

The new movie "Spy" is being screened in London as part of the SLOVO Russian Literature Festival.

A group of prominent writers were invited to the recently opened Russian bookstore at Waterstones, Piccadilly in April by Russian culture group Academia Rossica to watch the UK premiere of the new movie "Spy," directed by Alexey Andrianov.

Based on the book "The Spy Thriller" by Boris Akunin, the filmis set in a beautiful utopian Moscow in 1941, leading up to the outbreak of the Second World War. Novice chekist Egor Dorin starts his career by virtue of his distinguished boxing skills and perfect command of German language. Under Major Oktyabrsky, he is involved in an operation to find an extremely dangerous German spy called Wasser. The Germans are conspiring to convince the Soviet government that the war won’t start until 1943. The Soviet counterintelligence is successful until it becomes clear that there is a mole involved.

Read more about a Soviet spy:

The secret life of legendary spy

The style of the film is distinguishing – it picks up the recent steampunk and comic-book trends with double-deck trolleybuses, video conferences a la Skype, surveillance cameras and, of course, zeppelins. Andrianov is most likely a fan of directors Quentin Tarantino and Zack Snyder, as there are homages to both of them. And there is also an Easter egg for those who remember the phone booth episode from "The Matrix."

With an impressive casting of duo Danila Kozlovsky (Dorin) and Fedor Bondarchuk (Oktyabrsky), the film presents a very convincing interpretation of Akunin’s post-modern novel. The storyline is strong and the film is full of suspense but, as the plot is very complex, viewers will certainly benefit from the mini-series format (to be shown on TV in the autumn). The screenplay had to sacrifice some of the book’s storylines to fit the time constraints of a movie, but it’s still quite consistent with the book.

After the screening Boris Akunin led a Q&A session. As any writer whose novel gets a film adaptation, Akunin confessed he had mixed feelings about it. He compared his emotions about it to marrying off your own daughter whereby on the one hand, you are happy for the new stage in her life, but on the other it’s hard to entrust your darling to a stranger “especially hard when you have so many ‘daughters’ as I do”, joked Akunin.

And with tongue still firmly in cheek, the author said: “So in case you didn’t like the film – it wasn’t me who wrote the screenplay. In case you did like it – it’s based on my novel!”.