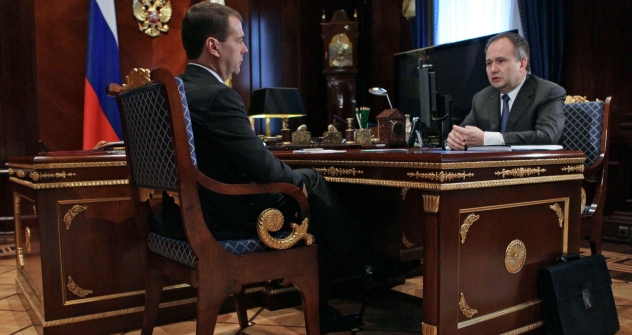 Oleg Chirkunov, right, has recently left the position of the governor of the Perm Region. The next governer will be elected in accordance with new legislature. Source: RIA Novosti / Ekaterina Shtukina

A series of political reforms supported by President Dmitry Medvedev has been signed into law. Key elements include the return to direct gubernatorial elections in Russia and an easier process for the registration of political parties.

A series of political reforms supported by President Dmitry Medvedev has been passed by the Duma. Key elements include the return to direct gubernatorial elections in Russia and an easier process for political parties to participate in elections. The provisions are considered a response to the protests that erupted across Russia following the Dec. 4 State Duma elections, but some experts believe the changes are merely cosmetic.

The new system for gubernatorial elections is going to be more complicated than the one abolished in 2004 at the initiative of then-President Vladimir Putin. To become a gubernatorial candidate under the new law, a citizen must gain the support of 5-10 percent of local deputies (depending on the local legislature) or at least 75 percent of heads of local administrations. Candidates can be nominated by political parties, or can nominate themselves depending on local regulations.

Progress on direct election of governors?

The reform also creates a new procedure for dismissing an ineffective regional head. The process can be initiated both from the top and from the bottom. The president is empowered to fire governors who are involved in corruption, misconduct and other violations of the law, if such allegations have been proven in court. Addtionally, if 25 percent of local residents vote to remove a governor, he will have to leave his position. He also won’t be able to run for governor again for two years. Governors will be elected for five-year terms and won’t be able to hold an office more than two times running in succession.

The law will come into force in July, and the first gubernatorial elections under the new provisions will take place in January 2013, continuing on a rolling basis as governors' terms expire.

At the same time, the president signed into law a bill that will make it easier for political parties to participate in elections. From now on, parties will not have to gather signatures in order to participate in elections for State Duma or local parliaments. However, parties not currently represented in the Duma or local bodies will have to gather the signatures of 100,000 voters.

The law is a companion to one signed by Medvedev in early April that made it easier to register political parties. After this law was signed, a party only needed 500 members to register rather than 40,000. Since April nearly 170 organizations have submitted applications to become registered parties.

Although Medvedev’s attempts to liberalize Russia’s political system seem to be a positive step, some experts have mixed feelings about the political reform.

“Everything depends on how the elections will be held,” said Evgeny Minchenko, head of the International Institute of Political Expertise. “Hypothetically, the opposition candidates have opportunities to gather signatures to participate in the elections. Yet the most manipulated elections might be in Moscow and St. Petersburg because local authorities are controlled by the federal ones. This may create some hurdles for nominating opposition candidates. I don’t rule out that this law will be amended again in the near future.”

Irina Starodubrovskaya, an expert from the Gaidar Institute for Economic Policy, describes the law as cosmetic. “It’s a halfhearted measure, but [it is taken] in right direction” she said in an interview with radio station Kommersant FM. "On one hand, it gives an opportunity to regional communities to choose their governors once again, on the other hand the law is very complicated and, besides, it proposes sophisticated mechanisms of electing governors, she said.

“A lot will depend on the [political] context and to what extent municipal deputies will be politically independent in expressing their opinions,” Starodubrovskaya added.