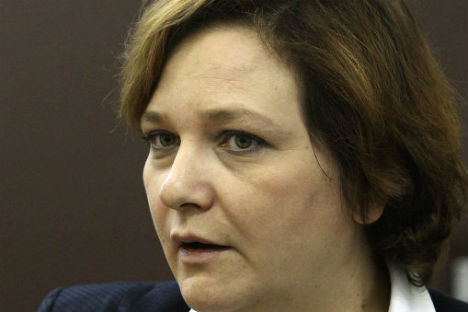 Russia’s civil society has made a dramatic leap forward over the past three years. The question is, whether Vladimir Putin is going to maintain the current level of independence during his presidency?

Russia’s civil society has made a dramatic leap forward over the past three years and is doing much more to curb corruption than the authorities, Yelena Panfilova, a prominent, outgoing member of the presidential anti-corruption and human rights council, said on Wednesday.

“Russia today is not the same country it was when I joined the council three years ago; first of all, it’s about the society, not the authorities,” Panfilova, who heads Transparency International's Russian branch, said at a news conference in Moscow marking the end of the council’s term under President Dmitry Medvedev.

Panfilova announced last week that she was not planning to continue her work with the council, which is expected to be reshuffled following the inauguration of Vladimir Putin on May 7. Several other council members also said they were going to resign.

Some observers have suggested it was their unwillingness to compromise with former KGB agent Putin that forced them to leave the council. But Panfilova downplayed the allegation on Wednesday, saying her departure was due to her desire to focus on civil activism rather than a falling out with the authorities.

“I believe that the society is doing much more, much better to counter corruption … than three years ago, and more than the authorities do,” she said.

Council members admitted that their success in promoting human rights and the rule of law in Russia was limited.

“We have done a small part of what we were planning to do,” Lyudmila Alexeyeva, who heads the Moscow Helsinki Group, said.

Yet, when asked by a Western reporter whether they were disappointed with a lack of progress in their work, council members said they were rather realistic and did not expect things to improve by leaps and bounds.

“To be disappointed, one must first be charmed,” Panfilova quipped, adding that this was not the case with her, since she realized that Russia still has a long way to go before its citizens can enjoy full human rights and social justice.

She admitted, however, that she was “embarrassed” with the strong opposition that many of the council’s initiatives faced from local officials who were reluctant to sacrifice their power in favor of a more open and just society.

“Local authorities are absolutely unwilling to react to proposals coming from the civil society, even if they are endorsed by the council,” she said, adding: “Some people fight for their corrupt interests so hard that it makes absolutely no difference for them that those proposals have been approved at the highest level.”

Mikhail Fedotov, the council’s head, said he told Medvedev during his final meeting with the council on April 28 about the obstacles the council members faced in their daily work.

“Medvedev’s response was: ‘This is our common fate’,” he said, adding: “If even the head of state cannot radically change the situation with one stroke of the pen – however strongly he wants this – we obviously cannot either.”

Among the goals to be pursued by the newly formed council, Fedotov and his colleagues named the tightening of punishment for abuse of media freedom, the creation of public television, as well as better anti-corruption controls, including improved legal protection of those reporting corruption cases to the authorities.

How to fight with corruption?

But the main question remains how many of the council’s current initiatives will survive Putin’s return to the Kremlin. The issues in question include the high-profile cases of jailed ex-Yukos head Mikhail Khodorkovsky and anti-corruption lawyer Sergei Magnitsky, whose controversial death in a Moscow pre-trial detention in November 2009 has triggered international outcry.

“We couldn’t resolve the main problems with the Khodorkovsky and Magnitsky cases,” Mara Polyakova, a council member overseeing reforms in the legal and law enforcement systems, admitted.

Nevertheless, she said she believed the council’s campaign to highlight the Khodorkovsky case had a “major effect on our citizens.”

“The high status of our council and the involvement of the most prominent experts have allowed the entire world to learn what is happening in the [Russian] court system,” she said.

Khodorkovsky and his business partner Platon Lebedev were detained in 2003 on fraud charges and subsequently jailed for eight years. They had been due for release in 2011, but were found guilty on a second set of charges and their sentences extended until 2018 in a highly controversial trial in December 2010. Khodorkovsky supporters say both sets of charges were Kremlin revenge for his financing of opposition parties, an allegation the Russian authorities strongly deny.

A survey conducted by the independent Levada Center pollster last year indicated that 31% of Russians back Khodorkovsky’s release, compared to 19% in 2007. Just 20% of those polled said they would keep the 48-year-old businessman behind bars, a drop from 44% in 2007.

In early February, the council urged Medvedev to pardon Khodorkovsky along with 30 other prisoners. But Medvedev has refused, saying he did not understand why he should pardon someone who had not asked for clemency.

Hermitage Capital lawyer Magnitsky’s death at Moscow’s infamous Matrosskaya Tishina pretrial detention center came to Medvedev’s attention last year, after the presidential council issued a report saying that his arrest was unlawful, his detention marked by beatings and torture aimed at extracting a confession of guilt, and that prison officials instructed doctors not to treat him. Two doctors have been charged with negligence in connection with the case, but charges were subsequently dropped against one of them.

Magnitsky was arrested in November 2008 on tax evasion charges by those same officers he had shortly before accused of stealing $230 million from the state budget.

Council’s New Look ‘Up to Putin’

Despite recent reforms designed to improve Russia’s judicial and law enforcement systems, Polyakova said the situation remained “extremely grave,” with cases of police abuse, including false arrests, harassment, falsification of evidence and torture, still being widespread in the country.

Alexeyeva expressed doubts that the council under Putin would be able to maintain its current level of independence, saying in an interview with the Kommersant daily that although Putin and Medvedev “swear allegiance to each other,” there was “significant difference” between them.

Fedotov said it was up to Putin to ensure that the council does not "turn into window dressing."

“If Putin wants the council to be like it was under Medvedev, it’s up to him to maintain it,” he said.

Fedotov said he would welcome any newcomers in the council if they share the same values as those whom they would replace.

“But if in the place of those great people we will have people who attack human rights rather than protect them… I will not be there,” he said.

Council members said they were considering launching a non-governmental organization to continue their work with anti-corruption and human rights issues following the council's reshuffle.