Putin takes the oath of office 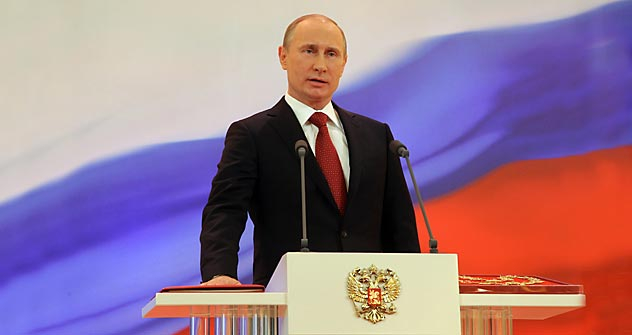 Vladimir Putin has been inaugurated as Russia's head of state for the third time with a formal ceremony and a lavish banquet.

Vladimir Putin was sworn in as president May 7 for the third time. Of the six presidential inaugurations in post-Soviet Russian history, Putin has taken the oath of office for half of them.

As is tradition, the inauguration ceremony took place in the Grand Kremlin Palace and lasted for around 40 minutes. Six federal TV channels broadcasted it live. Cranes with video cameras were installed near the Kremlin to film the presidential motorcade driving in. 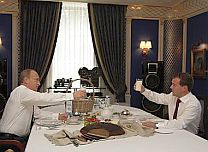 Read more: Back to Kremlin

Around 2,000 people were invited to the event, and only those who were personally invited are allowed in. There is no opportunity to buy a ticket to the inauguration. Among those invited were members of upper and lower houses of the Russian parliament, Constitutional Court judges, government officials, federal authorities and representatives of the diplomatic corps. Heads of foreign states have never been invited.

The event began with flag bearers entering the magnificent Andreyevsky Hall of the Kremlin Palace carrying the Russian flag, the Constitution and the presidential standard and insignia. The chairman of the Constitutional Court then placed them on the stand.

At 11:55 am, the president-elect arrived at the Kremlin through the gates of the Spassky Tower and walked through the splendid halls of the palace as clocks chimed in the background. Then the chairman of the Constitutional Court requested the newly elected head of the state to take the oath of office. With his right hand on the Russian Constitution, Vladimir Putin swore allegiance to the Russian people.

The text of the oath reads as follows: "In the exercise of the powers of the President of the Russian Federation, I vow to respect and uphold the rights and freedoms of the individual and citizen, observe and protect the Constitution of the Russian Federation, defend the sovereignty, independence, security, and integrity of the state and serve the people in good faith."

After the oath is said, the head of the Constitutional Court handed Putin the symbols of presidential power and declared that a new president had been sworn into office. This was followed by the national anthem of the Russian Federation and the presidential standard was raised above the residence in the Kremlin. Vladimir Putin then read his inaugural address.

In the final stage of the grand ceremony, the new head of state came out to the Cathedral Square, as the presidential regiment marched by and the bells in the Ivan the Great bell tower chimed.

Meanwhile, the head of the Russian Orthodox Church, Patriarch Kirill, held a special service in Kremlin's Annunciation Cathedral, once the private church of the Russian monarchs.

The ceremony was followed by a banquet with an exclusive menu that began with scallops with vegetable pancakes and mushroom sauce, smoked halibut with lettuce, fried duck roll with rosemary and Cornelian cherry sauce, and seafood salad with avocado puree.

Hot appetizers include fried King Kamchatka crab with mini-ratatouille and coconut milk cappuccino. For the main course, guests were offered sturgeon steak stuffed with vegetables in champagne sauce or rack of lamb rack with eggplant lasagne.

The attendees were also able to taste Kremlin Award premium vodka. The new beverage – made of the best grains and ethanol brands – was developed to be served at official ceremonies. Those who prefer lighter drinks could choose to fill their glasses with Abrau Durso collection sparkling wine or Pinot Aligote Selection Chateau le Grand Vostock (white wine).

The office of the president of the Russian Federation was established 20 years ago, with the introduction of the Law on the President of the Russian Soviet Federative Socialist Republic. Boris Yeltsin became the first Russian president and was elected twice, in 1991 and in 1996. Putin became Russian president in 2000, and was re-elected in 2004. He did not run for the post in 2008 as the Constitution does not permit one person to hold the office for more than two times in succession. He was appointed prime minister in 2008 and occupied the post for four years. It is the first time that a Russian president will serve for six years, not four as previously, due to changes made to the Constitution in 2008.