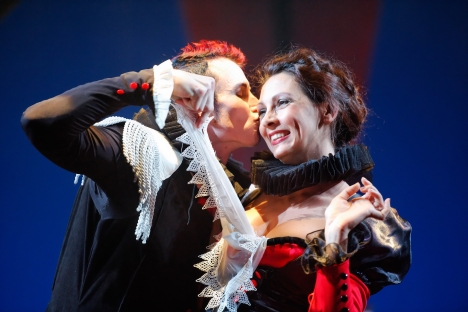 Irina Koval, who was raised in St. Petersburg, brings her training from Lenfilm Studios and a natural radiance to her roles.

Irina Koval glides into Busboy and Poets on 14th Street, still preternaturally graceful a week short of her due date. “I guess you didn’t expect a pregnant actress,” she said calmly. It’s more that one does not expect to see a woman so radiant and serene quite that close to delivery. Koval, who was raised in St. Petersburg, Russia, has lots of reasons to exude joy. The actress has won high praise for her acting, over the past decade, both in plays like “Purge,” a dramatic and dark work of sexual and political terror, and the innovative, movement-based dramas of her home company, Synetic Theater.

Synetic Theater works with words, but it has become most famous for its “Silent Shakespeare.” The wildly original vision of Irina and Paata Tsikurishvili, Synetic has become a Beltway jewel, shining the way for more innovators in what was once a lackluster theater town. “Taming of the Shrew,” which just finished its run at the Lansburgh Theater, is a lush, amusing and also poignant interpretation of Shakespeare’s comedy about the capriciousness of love.

The artistic directors were trained in Tbilisi, Georgia, where theater training includes mime, voice, speech, character dancing, horseback riding and fencing, among other skill sets. Irina’s father was an Olympic champion in gymnastics. So physical prowess comes to her naturally, and her choreography, for fights and love scenes as much as dance, has helped to mold the distinctive Synetic style.

Some critics are not convinced however, and do not accept what Synetic does as theater. “Of course it’s theater, just the way Chaplin is theater,” Tsikurishvili said.

Synetic is a theatrical sensation in Washington, D.C., a scene that has recently become more diverse and exciting. The troupe, which is increasingly known for its “Silent Shakespeare” series, is the vision of Paata and Irina Tsikurishvili, who, like Koval, moved to the United States in the 1990s—in their case, from their native Georgia.

Synetic Theater was nominated for a record-setting 15 Helen Hayes Awards this year, and Koval was nominated for her role as one of the daughters in “King Lear.” Seven “Lear” actors were nominated, including Koval, who is a frequent favorite of the Helen Hayes committee. (None of the individual actors won last week, but the troupe did nab best choreography and outstanding ensemble.)

“King Lear” was one of Synetic’s most challenging works so far, the actors said. “It was the most difficult piece I did with Synetic,” said Koval. “And to perform it in silence! I spent a lot of sleepless nights.”

“Irina is incredibly talented,” said Irina Tsikurishvili, who founded Synetic Theater about ten years ago with her husband Paata Tsikurishvili, after emigrating here from Tbilisi. “She started with our first Stanislavsky Theater [their first theater before Synetic] from day one. She was so beautiful with this great radiance and grace on the stage. It was so much fun with her and she was a source of ideas and inspiration.”

Koval’s serenity in person only hints at her magnetism on stage. Her recognition here—in a political capital city where theater has just emerged in the past two decades as its own force —is even harder-earned than with most struggling actresses.

Koval first arrived in the D.C. area from Russia in her late teens. She decided to emigrate with her family, a tough move for a kid, never mind an aspiring actress.

In St. Petersburg, Koval had a precocious beginning to her acting career. She was only 13 when she was cast in a film and spent the entire summer on the Black Sea. Soon after, one of the directors on the film invited her to study at Lenfilm Studios, which had started a school for young actors. When she came here, she found herself less confident. “For the first time after high school. I thought, ‘I will never fit in. I will never speak the language well enough. I will never be good enough,’” Koval recalled.

Related: Hvorostovsky takes on The Met

She returned to Russia, where she attended university. Yet Koval felt compelled to return to D.C. “I already saw I was living in two worlds,” she said. “I started having friends here, as well as my family, and started having a life here.”

When she returned to D.C. for the second time, she went around to local theaters to see what was on offer. Eventually, she started working with the founders of Synetic.

“Synetic is like a big family,” Irina Tsikurishvili said. “We have our cast and people stay with us a long time and we train them. We have our own movement vocabulary…we offer intensive training. Once a year we have auditions for new actors to mix them with older actors and they learn how to work in Synetic,” she said.

The group starts with the script, but then works with improvisation, pantomime, acrobatics, and a definitive movement vocabulary that is taught and understood by the seasoned veterans like Koval.

Synetic has won praise from the New York Times and The Washington Post as truly innovative theater, the group that dares to do something different. “No one does what they do — not in Washington or, really, anywhere that I know of,” Michael M. Kaiser, president of the John F. Kennedy Center for the Performing Arts, told the New York Times in 2011. “It starts from a theatrical base — what plot and characters do we want to portray? — and then creating the most imaginative physical movements in service to that story,” he said.

“There is a lot of mutual understanding about what is the process,” said Koval, who, while pregnant, was assistant director for Syentic’s most recent production, “Taming of the Shrew.”

The Silent Shakespeare series has become known, and the company has begun touring. “People come back to us and say we saw your performance,” said Koval. “And now we understand the play much better.”

culture theater us Theater Viral in Russia The X-Pat Files