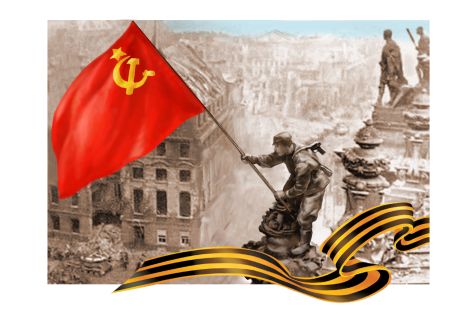 The end of the Great Patriotic War remains an important day to celebrate for Russians.

Related: Victory Day on both sides of the Atlantic

The Russians and other former Soviet peoples retain this title – the Great Patriotic War – because for them the war was a battle for the freedom and independence of their Motherland, a war for their very existence. Under the Nazi plans for the region, more than half of the Russian population was to be annihilated. But the people of the Soviet Union thwarted those plans. The task undertaken by the Soviet people was indeed “great.” Nearly the entire Soviet population was involved in the war in one way or another. More than 19 million people volunteered to be sent to the front. In that July speech, Stalin said: “The aim of this national war in defense of our country against the fascist oppressors is not only to eliminate the danger hanging over our country, but also to assist all European peoples groaning under the yoke of German fascism.”

This mission was accomplished. Although the victory was attained through the efforts of many countries, it was the Soviet Union that eliminated the bulk of the German army. More than 74 percent of the Wehrmacht’s total losses (10 million soldiers out of 13.4 million) resulted from battles with the Soviet army. Analyzing the impact of Soviet forces on World War II, U.S. President Franklin D. Roosevelt said: “I find it difficult to get away from the simple fact that the Russian armies are killing more Axis personnel and destroying more Axis materiel than all the other 25 nations put together.” The Red Army eliminated and captured 607 enemy divisions in 1941-1945, compared with 176 divisions eliminated by British and American troops. Nazi Germany had six times more personnel killed and wounded on the Eastern front than in the Western Front and in the Mediterranean Theater combined. Russians are naturally proud of their victory and are not ready to regard the Great Patriotic War as one of many fronts of World War II. 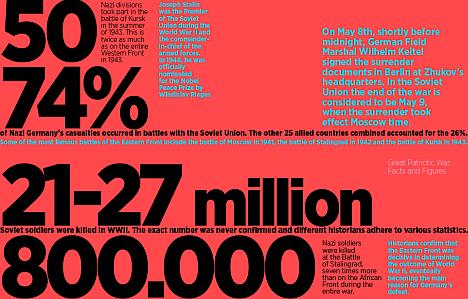 Great Patriotic War in facts and figures: click to enlarge

The St. George’s Ribbon campaign, during which symbolic ribbons with the orange-and-black pattern of the Order of St. George are distributed in the streets, is a perfect example. Held annually since 2005, the campaign celebrates Victory Day. Importantly, it was a public initiative that was later embraced by state officials. According to the campaign organizers, their objective is to “prevent new generations from forgetting who won the most terrible war of the last century, the price that was paid, and who and what we must be proud of and remember.” The slogans of the campaign include “My Grandfather’s Victory is My Own!”, “I Remember! I am Proud!”, “We are Descendants of the Great Victory!” and many more. More than 50 million St. George ribbons have been distributed throughout the world during the last six years – all countries with a Russian diaspora are involved. According to recent polls, 73 percent of Russians believe the St. George Ribbon is a positive initiative.

Since the Soviet era, May 9 has remained a symbol of the unity of the Russian nation. Attempts to peg the victory to the Stalin regime and create a feeling of guilt in the grandchildren and great-grandchildren of the victors for their grandfathers’ feats have failed. Russians today perceive the war as a great, patriotic war feat of the people, without focusing on political leaders.