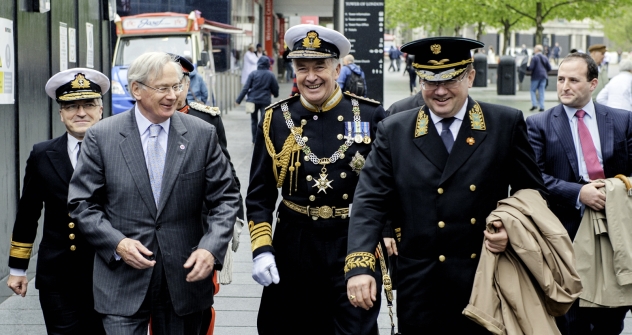 On May 9 May, Victory Day, London’s Russian and British communities came together to salute the bravery of the sailors involved in the Arctic Convoys of World War II. The festivities started with a reception on board HMS Belfast, followed by an open concert in the Hays Galleria.

The man behind these Victory Day celebrations, Eugene Kasevin from The Russia House, has been organizing London events commemorating the Arctic Convoys since 2007. He wanted to formally recognize the courage of Russian and British sailors and the pivotal role they played in the outcome of World War II.

Winston Churchill described the Arctic Convoys to Russia (1941-1945) as “the worst journey in the world.” During the convoys, allied and Russian vessels travelled from the UK and Iceland to Russia’s northern ports of Arkhangelsk and Murmansk via the treacherous seas of the Arctic Ocean. The sailors on these journeys braved 20-foot waves, pack ice and bitterly cold temperatures to deliver four million tons of vital supplies to the Soviet Union.

Related: Victory Day on both sides of the Atlantic

This year’s commemorative event started with Tower Bridge being raised in honor of the British and Russian veterans as the William B riverboat transported them along the Thames to a reception aboard the HMS Belfast, a important Arctic Convoy ship. Here the former servicemen raised traditional Russian and British toasts with Russian Ambassador to the UK Alexander Yakovenko, Former First Sea Lord Admiral Alan West, Assistant Chief of Defense Staff Rear Admiral John Gower, HM Lord-Lieutenant Sir David Brewer and HRH The Duke of Gloucester, who relayed a personal message from the Queen praising “the courage shown and the sacrifices made by British and Russian servicemen in the name of freedom.”

For the 2012 event, organizer Kasevin decided to expand the celebration to involve the general public, so this year the traditional private reception on board the HMS Belfast was followed by a concert, free for all to attend. It took place right in the heart of the City of London, where traditional music from the Russian village reverberated around the massive ceilings of the Hays Galleria. Music was provided by Moscow-based Family Tradition Folklore Ensemble, who performed against the backdrop of the Thames and the City skyline, with the HMS Belfast prominently visible outside.

Although for many Victory Day is a time to celebrate, for others it has a more personal significance. For Zinaida, a war veteran who joined the Red Army at the tender age of 13, the end of the war in 1945 marked the beginning of adulthood. Each year on May 9 she remembers the legacy of her army education, which taught her “honor, discipline and a love of humanity.” Lyudmila, aged 16, feels “grateful to those who risked their lives,” and Evgenia, 22, thinks of Victory Day as the most important day in the national calendar, one that “unites people from all generations.” It was touching to see children and young people express this gratitude by giving armfuls of red roses to the convoy veterans who attended the event. But of course the celebration is also a very solemn occasion – an opportunity to remember those who lost their lives. The mix of emotions was perfectly expressed by the Tchaikovsky 1812 Overture, performed by the Royal Philharmonic Concert Orchestra conducted by Benjamin Pope. Outside on the Belfast, a Royal Navy team from the HMS Collingwood fired cannons in time with the triumphant finale of the music. Inside the Hays Galleria the effect was ground-shakingly spectacular. 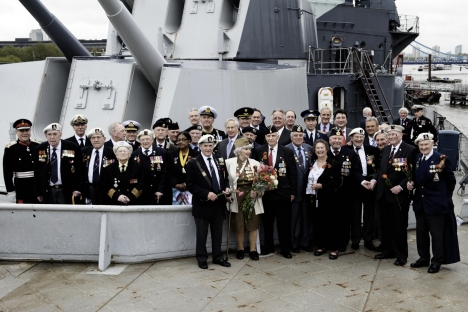 One of the main attractions of this event was undoubtedly the veterans themselves. There was Zinaida, now a gentle, softly-spoken elderly lady, once a young blonde soldier, feared as much as she was admired, who became the subject of several Red Army songs. Former Royal Marine Robert, 87, who served aboard the HMS Rodney, remembers docking in the Kola Inlet and being entertained by the “brilliant” Russian Navy male-voice choir. Interaction between British and Russian sailors was strongly discouraged, but this didn’t stop sailors trading with Red Army troops and giving out handfuls of chocolate to Russian children. Robert was just 18 at the time, and so typically one of his most lasting memories is of “the most beautiful girl I ever saw,” a Red Army officer. Many of the veterans’ memories are touchingly prosaic. John, now in his late eighties, remembers having to constantly scrape ice off the ship.

Veterans from both sides remembered strikingly similar experiences. In answer to the question “Was it frightening?” both Russian and British servicemen immediately say “No.” “We were young,” said Arthur, now 90, “we thought we were invincible, just like all young people do.” Vladimir, 87, remembers seeing ships blowing up all around him, “but we never thought it would happen to us.” More than 70 years later, Russian and British war veterans are finding that they have a lot in common.  “Ultimately we’re all the same,” said John. “We’ve become friends.”