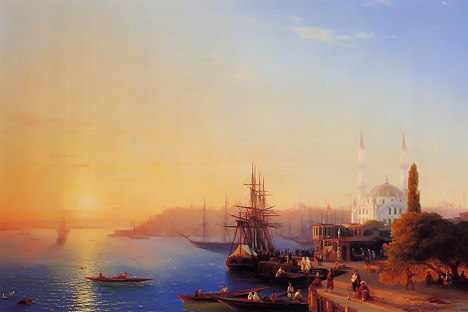 Ivan Aivazovsky’s “View of Constantinople and the Bosphorus” sold for more than $5.2 million, breaking yet another record in the booming world of Russian art. Pictured: Photocopy of the painting

In a quick, anonymous phone bid, an Aivazovsky brings in an unprecedented $5.2 million at auction. RBTH views the Russian art explosion up close.

What is the latest must-have for Russia's oligarchs? Not one painting, but an entire collection of Russian art. A new generation of collectors has emerged, with a focus on traditional areas of the market. For some, quantity of paintings is almost as important as quality.

On April 24, Ivan Aivazovsky’s “View of Constantinople and the Bosphorus” sold for more than $5.2 million, breaking yet another record in the booming world of Russian art.

Aivazovsky, born in 1817 to a poor Armenian family in the Crimea, became known for his luminous seascapes, encompassing moonlit shipwrecks, flaming sea battles or fishermen at dawn. Tsar Nicholas I appointed him official artist of the Russian Navy and he made eight trips to Turkey in the second half of the 19th century.

The 1856 “View of Constantinople,” with its watery path of golden light and harbor-side mosque in the setting sun, is a classic of the genre that made the painter famous. Its sale, after a lively bidding war, for nearly three times the estimated price to an anonymous buyer on the telephone, suggests the market is still buoyant and collectors have money to indulge their passions.

Ivan Samarine recalls “pulling that painting out of a cupboard in Helsinki back in 1995 and thinking ‘wow.’” Samarine is one of the foremost experts on Russian art. Together with the late John Stuart, he ran the Russian department at Sotheby’s and created the Russian Art Consultancy, building up the market internationally. He wrote an illustrated book about Aivazovsky, “Seas, Cities and Dreams.” Samarine describes the record-breaking painting, which was valued at around $400,000 back in the 90s, as “arguably the most beautiful Aivazovsky in private hands.”

Collectors have spent $702 million on Russian art at Sotheby’s auction house in the last five years. Joanna Vickery, Sotheby’s Senior Director and London head of Russian art talks about the “enormous financial muscle” of Russian collectors and says: “Russia has experienced a reawakening of collecting over the past decade which is almost unparalleled.” These new enthusiasts are “business people, oligarchs, and others who have become wealthy in post-soviet Russia.  Most are highly-cultured, knowledgeable and well-educated, and live both in Russia and abroad.”

Vickery attributes the recent string of broken records, especially for 19th century Russian artists, partly to the ongoing financial turmoil, observing “people seem to prefer to focus their resources on traditional areas of the market.” The avant-garde continues to be “in massive demand and is likely to only gain in popularity,” Vickery predicts, adding: “remember Russians such as Malevich, Kandinsky and Goncharova were among the art pioneers of the 20th century which has left a golden legacy for today’s collectors.”

In 2010, Christie’s sold a painting by avant-garde artist Natalia Goncharova for nearly $11 million, making it the most expensive work by a female artist ever to be sold at auction. There is competition not only for larger pieces; Macdougall mentions last December’s record price for a work by the artist and Ballets Russes designer Leon Bakst, which also set a new high for a Russian work on paper. It sold for more than 20 times the estimate.

The top end of the art market has been surprisingly resilient to the crisis, bouncing back since April 2009 despite the Lehman Brothers’ bankruptcy a few months earlier. The Sotheby’s summer sale in 2009 saw four new records set, with “The Village Fair” by Boris Kustodiev, selling for $4.5 million.

A dream of Russia

Kustodiev, with his cheerful paintings of merchant life among domes and snowy birches, is another artist who has proved popular. Samarine has written about his bittersweet depiction of the provincial middle classes on the eve of their destruction, with “their cheap printed trays, pickled cucumbers and Shrovetide fairs.”

Macdougall’s sold Kustodiev’s 1923 “Merchant’s Wife” last December for a cool $2.9 million. The glossy, gold-backed catalogue stressed the iconic nature of the painting and its evident nostalgia for a “dignified patriarchal society.” These are qualities that play well at auction: that the painting is both a recognizable image and a romantic view of the artist’s homeland: “a kind of dream of Russia, as she had at no time in no place existed.”

Originally exhibited at the 1924 Russian Art Exhibition at the Grand Central Palace in New York, “The Merchant’s Wife” ended up in a private collection in Europe, but many of the works on sale this summer will come from American collections. According to Macdougall, “Western bargain hunters were the main buyers from 1917 to 1991, but at current prices Westerners now tend to be sellers, except in a few specialist areas such as icons.”

Some critics argue that accessible artists like Aivazovsky and Kustodiev are an easy choice for those with more cash than taste. There are also rumors of collectors buying in bulk with an eye to quantity as well as quality. Amassing huge art collections is nothing new in Russia. Samarine points out that Catherine the Great set an example for today’s oligarchs and billionaires to aspire to when she bought up art to create the galleries that still form the basis of the world-famous State Hermitage Museum in St. Petersburg.