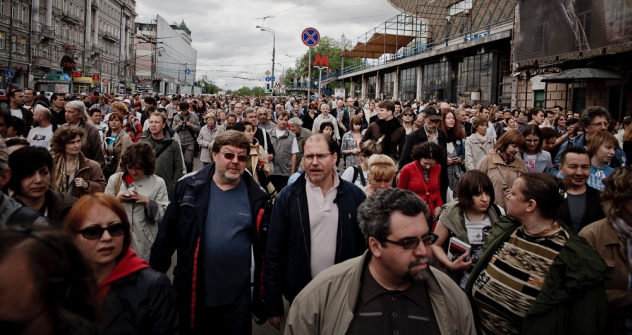 The organizers of "the walk of control" could hardly have imagined that their action would attract so many people. Source: Ruslan Sukhushin

Thousands of people responded to a call by popular Russian writer and opposition figure Boris Akunin to march through the boulevards of central Moscow.

“The goal of the experiment is to find out whether Muscovites can walk in their own city freely or they require some sort of pass for it,”  wrote Akunin on his blog. “We will be pretending to talk about literature (shivering with terror in fact) while walking from one Alexander Sergeevich to the other. We’ve made our wills, wrote last songs, some of us have even put up their literary monuments – just in case.” Akunin was referring in the post to his plan to walk between the monuments of 19th century Russian writers Alexander Pushkin and Alexander Griboyedov.

The decision to take this “walk of control” was fueled by the frustration of many at the recent action of the Russian authorities, who on May 6 and 7 detained many in central Moscow for no cause.

The organizers could hardly have imagined that their action would attract so many people. The crowd spilled off the pavement and into the streets, blocking traffic on some of the boulevards. The organizers claimed that 10,000 people participated in the event; Moscow police reported a much lower but still significant number – 2,000 people. The status and popularity of the organizers also determined the participants’ demographic. Most of the walkers were middle-aged and older, typical representatives of “old intelligentsia.” The participants also adhered strictly to the format of the event – it was a walk, nothing more. No one chanted or carried a single poster, leaving no chance for the authorities to accuse them of organizing a political action.