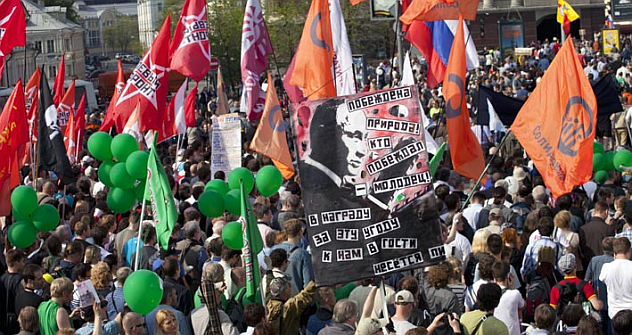 According to differnt estimates the may 6 protests was one of the most violant and large-scale since last December. Source: Ricardo Marquina Montañana / RBTH

Although the police cracked down on an anti-Putin rally, the scale of the Moscow riots indicates that the protest movement is still strong.

A mass rally and rioting in Moscow on the eve of Vladimir Putin’s presidential inauguration showed the sustainability of anti-Putin protests, which are radicalizing because the government failed to reason with the opposition, pundits said on Sunday.

“It’s a very uncomfortable situation for Putin,” said Yevgeny Minchenko, head of the International Institute for Political Expertise. “He wanted things to be quiet, but people are charged for protest.”

Between 50,000 and 100,000, by various independent estimates, showed up on Sunday for an anti-government rally on the downtown Bolotnaya Square, which was to demand repeat presidential and parliamentary elections due to alleged vote fraud. Moscow police said the turnout stood at 8,000.

But unlike similar rallies in Moscow over the past six months, the protest quickly turned violent, with scores of radicals in the crowd clashing with police in an attempt to march to the Kremlin. More than 400 were detained, and several protesters and policemen were injured.

Many spectators predicted the protest drive, which resulted in five mass rallies in Moscow between December and March, will be dying down after the presidential vote on March 4, won by Putin, but the Sunday rally showed it is not the case, said independent political analyst Stanislav Belkovsky.

“The society has potential for protest. The drive for change did not vanish, and many people still push for Russia to become a normal European country,” Belkovsky said. 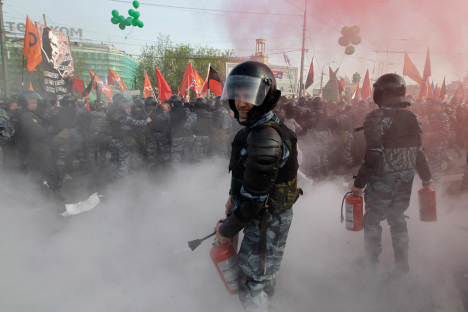 Protests have united a variety of political and ideological groups, all of whom accuse Putin’s government of ineffectiveness, corruption and curtailing civil liberties. Putin and his supporters responded by labeling protesters West’s henchmen seeking to undermine Russian sovereignty.

The opposition is radicalizing because Putin’s government failed to enter a full-scale dialogue with it after the first rallies in December, said Alexei Makarkin of the Center of Political Technologies think-tank.

The government announced a reform to liberalize political legislation after the first protests, but began a gradual rollback of most promises since December, miring the reforms in red tape that analysts said were aimed to cripple it, retaining the Kremlin’s tight control over the country’s political life.

Pundits differed on prospects of radicalization for the opposition movement. Makarkin said it was a dead-end because it was alienating moderate protesters while Belkovsky said it was the only way of keeping the protest drive mobilized after the peaceful protests failed to impress the government.

In any case, the clashes were an unpleasant surprise for Putin, both because his return to the Kremlin after two presidencies in 2000-2008 will be marked in the eyes of observers worldwide by a violent crackdown on opposition and because he is brought to realize the protest drive is as vibrant as ever, analysts said.

Dialogue remains the best solution for the political crisis, but Putin passed over the chance for it in December and is very unlikely to begin talks now, after a display of power by his opponents, Makarkin said.

“The authorities don’t know how to do dialogue and don’t like it,” he said. 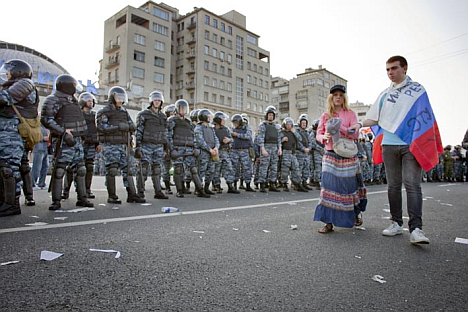 Putin is likely to begin tightening screws now, for example, by banning rallies in downtown Moscow, Makarkin said. “The opposition was speaking on Sunday about the last hours of freedom,” he said.

But that would not work in the long run because the public has already received a taste of street protest and is not afraid of continuing it, Belkovsky said.

“One violent rally won’t do much,” agreed Minchenko of the International Institute for Political Expertise. “But if it will go on, and it probably will, even as unsanctioned rally, it would eventually endanger the authorities and their hold on power.” 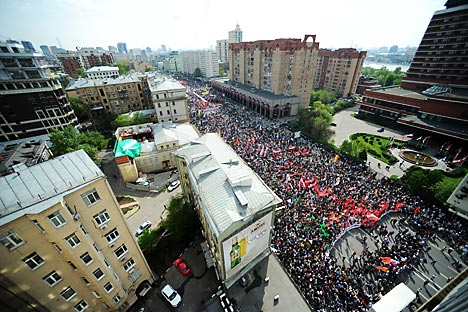 The May 6 protests are in full swing. Source: RIA Novosti / Vladimir Pesnya

However, he and the other analysts refused to elaborate on possible scenarios of regime change in the country.

“The situation’s in a deadlock,” Makarkin said.