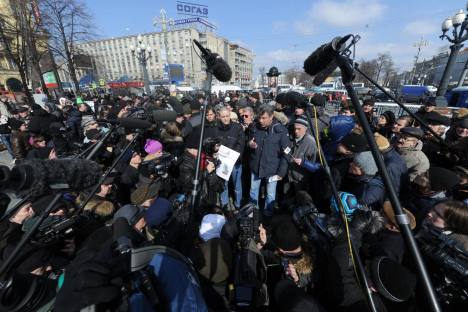 Rallies are losing their appeal because protesters feel they are unable to change the political situation. But this doesn’t mean the authorities can be complacent.

“Dry food for an animal shelter urgently needed,” read an announcement on the Russian social network site VKontakte. This wasn’t an appeal by an animal welfare organisation: it came from the 170,000-strong “Against Putin and United Russia Party” group. In recent weeks, calls to take to the streets have been interspersed with calls to give blood or raise money for surgery.

The civic activism that fuelled the protests is taking other forms, while rallies are staged by a few activists from political parties.

“After Bolotnaya Square, I attended other actions and, each time, my combative mood diminished,” says Sofia Shaidullina, a young protester. “As the elections drew closer, the word ‘futile’ was bandied about more and more in conversations with my friends.”

The opposition protests on March 17 and 18 in Moscow were smaller than those before the presidential election. Against this background, the planned “march of the millions” scheduled for May 6 may be a little overambitious. At best, it will be a “march of tens of thousands” and draw the line under the period of protest in Moscow.

“People have realised that white balloons and ribbons are no weapons against Omon special security units. A period of social torpor lies ahead”, says author Boris Akunin, an organiser of the winter rallies.

One of the reasons that the wave of protests has subsided is the sheer weariness of ordinary people. Unlike political activists, they are not used to going to rallies as if it were their work. Second, the authorities are now behaving more wisely. There were far fewer irregularities in the presidential elections (at least in Moscow) than were witnessed in the Duma elections in December. Many of the protesters have, deep down, resigned themselves to Mr Putin’s victory. Even an independent vote count gave him an overall majority of the votes. This did more to take people off the streets than anything else.

The key issue today is whether people who were politically awakened by the protests become disenchanted with politics. The future of new political parties that will spring up in the aftermath of the protests and the liberalisation of the law on political parties depends on people remaining engaged. There will probably be too many new parties emerging. The authorities, nevertheless, are unlikely to object to this. “Having many parties will split the opposition electorate, with the result that the opposition parties will find it hard to overcome the 5pc cut-off barrier to enter parliament. That will play into United Russia’s hands”, says Mikhail Tulsky, President of the Politicheskaya Analitika think tank.

A divided electorate will make things more difficult for Mikhail Prokhorov (former leader of the liberal Right Cause party), who will be building a new liberal party, almost certainly in company with former finance minister Alexei Kudrin. Mr Prokhorov’s showing in the presidential election provides a good springboard. Yet it is one thing to win 7pc of the votes when standing against five leaders who have become overfamiliar to the public over the past 20 years and quite another to win the hearts and minds of voters when confronted with dense ranks of the right-wing, left-wing, social democratic, monarchist and other parties that the Justice Ministry is registering by the dozen.

What happens in Russia now depends on how Mr Putin behaves on his third presidential watch. The controversial situation on the eve of the elections forced him to demonstrate a readiness for dialogue. Mr Putin made it clear in articles published before the elections that he was ready to change and for a more meaningful dialogue with society. He promised to revive the system of referendums, to make it easier for citizens to initiate legislation and strengthen public scrutiny of the executive. Whether or not Mr Putin fulfils these promises will dictate what happens to him.

According to Alexei Mukhin, director of the Centre for Political Information in Moscow: “The people around the President understand that if Putin fails to keep even part of his electoral pledges, this will preserve the protest potential.”

Mr Putin will have to work with both the protest electorate and with his supporters. As Mikhail Dmitriyev, President of the Strategic Studies Centre (which predicted the latest political tensions) points out, Mr Putin’s problem is not legitimacy, which he now has, but how long that perception of legitimacy will last against the backdrop of growing discontent outside the big cities. “At the end of the day, it was the Russian hinterland that elected the President,” Mr Dmitriyev argues. “Now, the problem with the Russian hinterland is that it has frequent mood swings. It may happen that, in a year or 18 months, support for Putin among these social strata will change dramatically. It happened in the Nneties. In 1996, Yeltsin was elected and, by the end of the Nineties, his approval rating had plummeted to less than 10pc. These are very real risks for Mr Putin.”

Mr Putin’s supporters in the provinces do not care very much about political reform. They are far more worried about the problems of housing and utilities, which have not been addressed for more than 20 years, and also about corruption. Mr Putin has always conducted a cautious personnel policy without surrendering members of his team and anti-corruption trials have seldom involved top officials. But if he does not want to see the anger of provincials shift from local bureaucrats to himself, he will be obliged to change his policy. “Putin will not stop at shaking up the ruling team, as witnessed by the sacking of Sergei Darkin, governor of the Primorye Territory. The fight against corruption will move from the lower to the middle and higher levels,” Mr Mukhin says. Otherwise, Mr Putin will be unable to keep the support of his followers, for he will not be able, as before, to guarantee their support by pursuing an active social policy.

According to Mr Dmitriyev, from the point of view of the Russian hinterland, public spending must continue to increase but the Russian budget might have limited resources to do this and any deterioration in the economic situation will probably lead to a reduction in public spending. If this happens, Mr Medvedev’s political future looks uncertain. By not running for a second term, Mr Medvedev has confirmed his image as a politician who is not independent. He will, of course, become prime minister, but not many political analysts give him any chance of holding on to the job throughout the six years of Vladimir Putin’s presidency.

He is sure to become a sacrificial lamb following the unpopular decisions that the government will have to take. These include the inevitable increase in the retirement age and other measures aimed at reforming the pension system. In this case, only a major sacrifice will rescue his  popularity rating.