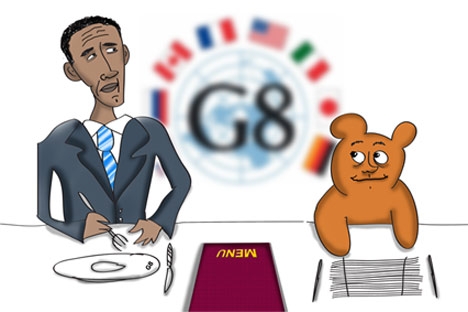 It would be wrong to see Putin’s refusal to attend the G8 summit at Camp David as a sign of an anti-Western turn in Russia’s policy and a change of its priorities.

Vladimir Putin’s decision not to go to the G8 summit at Camp David on May 18–19 means that China will be the first big country he visits after being elected president for a third term. His visit to China is already planned for some time in the first 10 days of June). Whatever domestic policy factors might have influenced Putin’s decision, its international consequences could not have been ignored. The decision not to attend the summit and to send Prime Minister Dmitry Medvedev to stand in for him will inevitably be perceived in the context of Putin’s anti-Western rhetoric as prime minister and the Putin-Medvedev disagreement over Libya.

Related: Medvedev to stand in for Putin at G8

Putin’s actions could be interpreted as evidence of an anti-Western turnabout in Russian politics and a change of its priorities, but that would be a mistake. Russia’s foreign policy priorities have hardly changed since the second half of the 1990s.

Russia’s policy of balancing between East and West has been marked by extraordinary continuity and consistency since the time of Russia’s first president, Boris Yeltsin. Yeltsin had a penchant for using ties with China as a counterweight to Western pressure. “Bill Clinton permitted himself to bring pressure on Russia. Apparently he forgot for a second, for a minute, for half a minute what Russia is and that Russia possesses the full arsenal of nuclear weapons,” Yeltsin said during his visit to China in December 1999 in the presence of Chinese leader Jiang Zemin. Putin, whatever one might think about his rhetoric, has never brandished nuclear weapons while visiting Beijing.

During his presidency, Yeltsin personally controlled the main parameters of the development of Russian-Chinese relations, considering them to be a key foreign policy priority. It was under him that the foundations were laid for Russo-Chinese strategic partnership (Yeltsin and Jiang Zemin adopted a declaration to this effect in 1997. During the same era, foreign minister Yevgeny Primakov put forward the idea of a three-way partnership between Russia, India and China to influence global policy.

Yet, under Yeltsin, the Russian ideas of balancing between the West and the major developing countries were seen in the U.S. and Europe as a naïve bit of play-acting unable to mislead anyone. The Chinese economy was not yet so big and China’s trade was mainly orientated on developed Western countries. The economic clout of other BRICS countries was even less significant. It was not until 2001 that trade between Russia and China topped the $10 billion mark (in 2011 it was over $79 billion).

The situation changed dramatically during Putin’s second term as president. China became the world’s second power and a major trading partner of Russia (counting EU economies separately rather than as a bloc). That opened up heady new prospects for the Russian policy of balancing between the world’s leading power centers.

Putin admitted as much in his interview with federal TV channels in November 2011, noting that China, unlike Russia, aspires to world leadership and “we are not going to challenge China over that,” adding that China has its own rivals and Russia will “let them sort things out among themselves,” while Moscow strengthens its own relations with Beijing.

The change in the global political situation and the need for the United states to pay closer attention to the Asia-Pacific region have already contributed to a rebooting of Russian-American relations. So far, however, Russia’s balancing act has not been entirely successful. The emergence of China as a global rival to the United States increases Russia’s significance, but it will be hard to parlay these changes quickly into real benefits.

The most successful example of the use of contradictions between superpowers was provided by China itself during the Cold War. The development of China’s ties with the U.S. on an anti-Soviet basis in the 1970s and 1980s created ideal conditions for economic reform in China and went a long way to ensuring their success.

The conditions for a rapprochement between the U.S. and China were in place from at least the year 1960, when a rift occurred between the Soviet and Chinese Communist parties and Soviet specialists were recalled from China. Even so, domestic political concerns conditions in the U.S. made a U-turn in American-Chinese relations impossible, and real steps towards mending fences with Beijing (consultations between the two countries’ embassies in Warsaw) had to wait until 1969.

Beginning in the early 1980s, satisfied that a solid basis for relations with the U.S. had been created, China embarked on a normalization of its relations with the Soviet Union. This enabled China, starting from the 1990s, to receive strategic technologies and political support on the global stage from Russia. The negative clichés regarding Russia that exist in the United States today may not be as strong as the clichés with regard to China in the 1960s, but it will take time to overcome them. For a successful balancing act, Russia needs to have good relations with both super-powers. Until that task is resolved, Russia will make sporadic attempts to demonstrate to the U.S. its own importance, independence and readiness to defect to the other camp if push comes to shove.

Vasily Kashin is an expert with the Strategies and Technologies Analysis Center.This opinion was first published in the newspaper Vedomosti.