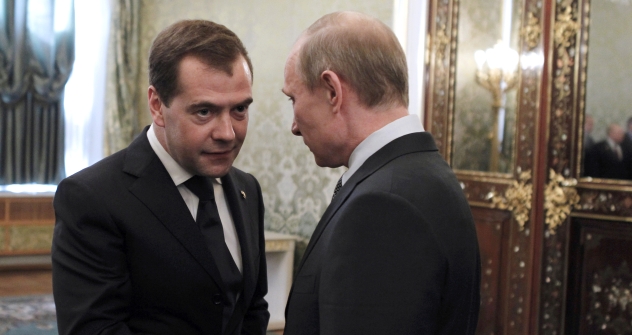 Russian President Vladimir Putin says he will be too busy to attend the upcoming G8 summit at Camp David as U.S. President Barack Obama makes the same claim about the APEC summit in September.

Russia’s newly inaugurated president, Vladimir Putin, will not attend the G8 summit at Camp David later this month because he will be busy forming a new government. Instead, he will send Prime Minister Dmitry Medvedev as his stand-in.

Putin’s decision not to go to the G8 summit on May 18-19 was announced by the White House press service. Putin, who was sworn in as president for the third time on May 7, told U.S. President Barack Obama about his decision when Obama called Moscow to congratulate Putin on Victory Day and on his inauguration, although the White House had been informed of the decision last week during a trip by Obama’s National Security Advisor Tom Donilon to Moscow.

Putin sent his regrets, explaining that he will be too busy forming a new government to make the trip to the U.S.

“Noting that he has commitments to complete the process of appointments to the new Russian government, President Putin expressed regret that he would be unable to attend the G8 summit at Camp David on May 18-19,” Putin’s press service announced. “President Obama said he understood President Putin’s decision and welcomed the participation of Prime Minister Medvedev at the G8 summit.”

Nevertheless, the decision was a slap in the face to U.S. officials, who are rumored to have moved the G8 meeting from Chicago to Camp David in part to accommodate the Russians. The G8 summit was originally scheduled to be held in Chicago ahead of the NATO summit in that city on May 20-21, but after it became clear that no Russia-NATO council meeting would take place on the sidelines of the summit, the decision was made to move the G8 meeting to Camp David, the U.S. presidential retreat outside Washington, DC. Although the White House has said the G8 summit was moved in order to create a more trusting atmosphere, the Russian press attributed the change in location to a desire to spare the Russian participants the need to pointedly leave Chicago in between the two summits.

Valery Ryazansky, a member of the Federation Council from United Russia, said that Putin’s decision is completely related to domestic concerns. “Internal issues are more important now, Putin has made this clear,” Ryazansky said. “Medvedev is the country’s second most important man, and he will be perfectly able to represent Russia at the G8 Summit.”

Other experts, however, take a different view. Some believe that Putin may have declined the invitation to Camp David because he did not want his first foreign trip as president to be to the United States. Putin’s decision not to attend the G8 “removes the possibility that the two leaders will promote an image of cooperation in the wake of the tensions between Washington and Moscow that surrounded the Russian elections,” wrote American blogger Josh Rogin.

Opposition leader Mikhail Kasyanov took the reasoning a step further: “He is exacting his revenge – firstly on Obama, but most of all on [Vice President Joe] Biden – who openly supported Medvedev and called for Putin not to run for president. He wants to teach them, and Medvedev, a lesson. After all, the Constitution states that it is the prime minister’s job, and not the president’s, to form the government. But Medvedev is sent on a faraway mission, and this was a conscious decision. Another motive is that Putin has realized that he will never make friends with America. But he can maintain a cool and reserved policy even if he misses the summit.”

Political expert Dmitry Oreshkin agreed that Putin’s personal feelings about the U.S. likely played a role in the decision. “Putin naturally dislikes America, because America is not happy about his victory in the election,” Oreshkin said. “This is to show them that he can do perfectly well without them while at the same time addressing another issue – building the image of an external enemy that will do its utmost to bother Russia. Furthermore, Medvedev himself is an exhibition politician – when he was president, his foreign visits were his main strengths. This decision by Putin will not spoil the relations between Russia and the United States, as they expected nothing else from Putin.”

And indeed Moscow and Washington have had harsh words for each other in recent days. On the day of Putin’s inauguration, the State Department condemned the harsh crackdown on opposition protestors in Moscow, and several days earlier, Russian Chief of the General Staff Nikolai Makarov hinted about the prospects of a pre-emptive strike on American ballistic missile defense facilities.

Putin’s decision not to go to the G8 “is in large part because he wants to avoid uncomfortable questions,” said Vadim Solovyev, a State Duma deputy from the Communist party. “He would definitely be asked about the phasing down of Medvedev’s liberalization campaign, the dispersal of rallies and police brutality… What would Putin answer? Nothing that would make any sense.”

According to former presidential advisor Vladimir Shevchenko, Putin “needs to take a break. We have uneasy relations with the global community at the moment, and we don’t want them to worsen. Moreover, the government is yet to be formed. I would think a hundred times before going. Anyway, we are going through a period when whatever you do, the result will be poor. We managed to hold a more or less fair election, but it has turned out badly. And this holds for everything.”

Political analyst Gleb Pavlovsky thinks the move helped Putin avoid uncomfortable questions in another way: “It is a way to shift people’s focus from rallies and crackdowns on the opposition to Putin’s refusal to go.”

Nikolai Zlobin, director of Russian and Asian Programs at the World Security Institute in Washington, D.C., thinks that the decision is the best one for all parties for the time being. “A meeting with Putin would be uncomfortable for everyone, and perhaps he was simply asked not to come,” Zlobin said. “The West would have to put pressure on him, to criticize him for post-inauguration developments. But this is of no use to anybody now; none of the G8 countries wants to sour relations with Moscow. Obama, for his part, is not ready to communicate with Putin yet; the agenda for their meeting and their positions have not been worked out. I guess that this decision will suit everyone, and in about a month all G8 leaders will meet with Putin.”

Putin will have his first meeting with Obama in his capacity as president on the fringes of the G20 meeting at Los Cabos, Mexico, on June 18-19.

Putin’s decision not to attend the G8 may have broader consequences, however, as the White House announced on May 11 that Obama will not attend the APEC summit in Vladivostok in September. U.S. officials cited Obama’s commitment to attend the Democratic Party’s nominating convention, schedule to take place in Charlotte, North Carolina the same week as the APEC meeting. Nevertheless, the absence of the U.S. president is a blow to the Russians, who have spent millions preparing the Far Eastern port city for the summit.

The combined report based on the information from Kommersant Daily and Gazeta.ru.