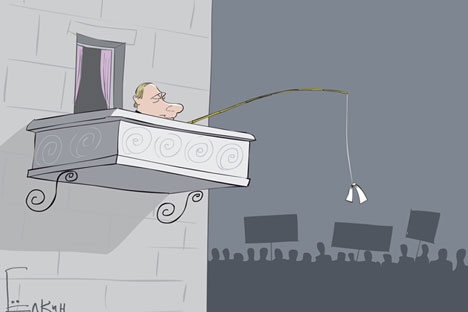 What do the events of May 6-7 say about the future of the Russian protest movement?

The paths of public expectation and of authorities' intentions have diverged, and this break is being felt at the grassroots level. Those who go to rallies are well aware that they are not protesting for increasing the minimum wage, raising the retirement age, or giving state employees a raise. People who do not go to rallies and condemn them truly do not understand what the protestors want. After all, it seems that those taking to the streets have a good life.

Moscow is rebelling, although it is clear that the conditions of life in the capital are significantly better than in the regions. The issues of importance to the protestors are not per-capita income or a comfortable retirement; rather, they are concerned with transparency, social mobility, urbanization, and education. It is easy to see that people, irrespective of their ideological preferences, are now uniting around issues of growth, diversity, and liberalization – issues they never would have even discussed previously. For the authorities, the better life gets in Russia, the worse for them.

Insofar as a city is a public place and contains an almost unlimited diversity of groups and interests, it takes an extraordinary situation to rally the masses into a unified upsurge. Something quite out of the usual has to happen in order to find fans of the Moscow-based rivalry teams CSKA and Spartak meeting shoulder to shoulder at one demonstration.

And yet, the character of the protest, judging by what I saw on May 6, has already begun to change, and not for the better. Most of the protesters, as in the past, are peaceful, law-abiding citizens with above-average levels of education. Still, there were two new features of the composition of the crowd: there were more visitors (from St. Petersburg, Voronezh, Perm, Yekaterinburg, even Minsk), representing young, determined activists; and a leftward shift of the rhetoric.

Moderates such as Russia’s prominent writers Boris Akunin and Ludmila Ulitskaya, politician Gennady Gudkov, journalists Leonid Parfyonov and Sergei Parkhomenko left the rally feeling the futility of this form of dialogue with the authorities. And yet, instead of fizzling out, the protest became radicalized. The initiators had left, but the street was by no means empty. The role of Left Front leader Sergei Udaltsov and people like him increased, and the leadership of the march and rally shifted quite noticeably to the left. It will be hard to turn back.

Those who do not want to go leftwards have to look for a new niche in the protests. It is not difficult to foresee that at the next mass action, there will be fewer law-abiding intellectuals and well-meaning city folk than there are kids from the suburbs. Intellectuals and city people are not very interested in listening to what Udaltsov has to say, and the same goes for other opposition figures  Boris Nemtsov and Alexei Navalny. Everything they could possibly say has already been said – although not heard.

So what happens now? Street occupations, fighting with the OMON riot police, slingshots, bottles, and all the rest of it. That was how the confrontation was set up on both sides on May 6. And so the street moves to the left and draws participants from the suburbs and the provinces. Meanwhile the city itself is bewildered: People have no interest in fighting alongside Udaltsov, but see no alternative. Contrary to expectations, social unrest is not abating. Few expected that as many people would assemble at the Bolotnaya in May as in December, but they turned out to be wrong.

This means that the sectors of the urban population that are most involved are quite strongly disaffected. Most likely, the protest will lose its unity, but will spread to new areas: vertically to new strata and horizontally to new regions.

It is becoming fashionable to mock the authorities, and this is a very, very bad sign.

Dmitry Oreshkin is Russia's influential political expert and a member at Russia's Presidential Council for Development of Civil Society and Human Rights Institutes. He attended the May 6 rally.

This opinion is abridged. Originally appeared in the Ogoniok magazine. It is available in the original Russian here.