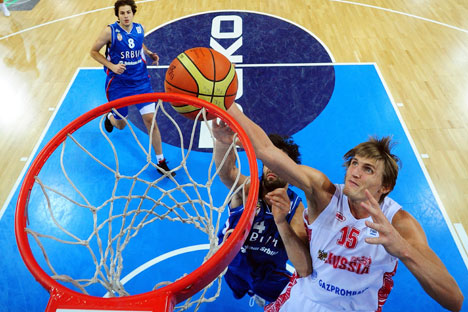 While the Russian national team is heir to the Soviet basketball glory, it has yet to produce any outstanding results. The Russians won the silver at the world championships in 1994 and 1998 and won their first gold – at the European championships – only in 2007.

That team did not make the next logical step, though. The Russians easily beat Iran in the first game of the 2008 Beijing Olympic tournament, but were then defeated by Croatia, Lithuania, Australia and Argentina. Russia finished fifth and did not make it into the next round.

The history of Russia’s national team is inseparably linked to the career of its star Andrei Kirilenko, known by journalists and fans as AK-47.

Kirilenko became the youngest player in the history of Russian basketball championships – he played his first game for Spartak St. Petersburg at the age of 15. In 1999, Kirilenko became the first Russian picked in the first round of an NBA draft. He was selected by the Utah Jazz. In 2007, he helped the Russian national team beat Spain in the EuroBasket 2007 final and earned MVP honors. He earned the right to carry the Russian flag at the opening ceremony of the Beijing games.

Despite his success, however, Kirilenko hopes for more for the Russian national team.  Russia Beyond the Headlines spoke with Kirilenko about his hopes for the 2012 London games and his personal struggles and triumphs.

Russia Beyond the Headlines: Were you very much upset in Beijing, when you were left without medals or glory?

Andrei Kirilenko: Glory is a bit too much, but I was indeed angry at myself and not only… I had been dreaming, and I’m still dreaming of winning Olympic golds.

RBTH: Do you have what it takes?

A.K.: We have our team, morale, hope and a first-rate coach, which is a lot.

RBTH: Will this be enough to beat the U.S. and Spain?

A.K.: Every factor is important in sports. I guess it’s worth a fight.

RBTH: But, before going to London, you need to play in the Olympic Qualifying Tournament in Venezuela this July. Do you think you can handle it?

A.K.: If we thought otherwise, we shouldn’t be going anywhere. We will definitely go to England and fight for the medals. The team shares this spirit!

RBTH: Is it always painful to be beaten? Is every loss is a huge stress?

A.K.: I’ve had so many injuries in my life, including psychological blows. I have no psychological barriers, and I’m still marching ahead. It doesn’t matter what others think. The important thing is the way my wife and children look at me and that they love me.

After the Beijing Olympics, Kirilenko left for the NBA. He played in the US until last season, when he had to get back home because of the lockout. Forbes named him among the highest-paid athletes in the world, with $17.8 million paid for the season.

RBTH: Weren’t you afraid to go back to Russia? You hold an American passport. Not everyone in Russia thought your decision made sense.

A.K.: Why? I knew where I was going and America will wait. My wife and three children were able to choose where to live.

RBTH: It is no secret that you adopted your third child, a baby girl. You sought adoption in Russia for several months. Why did you want to do this?

A.K.: I do not want to answer this one. I made this decision with my wife and we will try and make this child happy.

RBTH: You have established a charity for children. Why?

A.K.: I just like helping those helping need, especially children, and I am in a position to do so.

RBTH: Can you say a few words about the problems you had taking your U.S. citizenship test.

A.K.: Those were not problems, but a misunderstanding. I could not answer a question about the War of Independence. They asked me why the colonists disliked the British government and I said they wanted freedom. They told me the answer was wrong, but I said I thought it was definitely right…

A.K.: It was an easy decision. CSKA is a pleasure rather than a burden. I might have lost something, money-wise, but it is not the most important thing for me currently. It is more important that we started building up our team and it would be wrong for me to leave my job half-finished, after so much emotion and effort has been invested. Then again, because of the lockout, the new NBA season started poorly, many teams are not fully staffed, and they have little time to play too many games. Look, ten to twenty men were injured during the first week. I decided to stay in Russia and then think about my future in the summer. I think I will make up my mind after the qualifiers and the London Olympics. I have been thinking of nothing else lately.