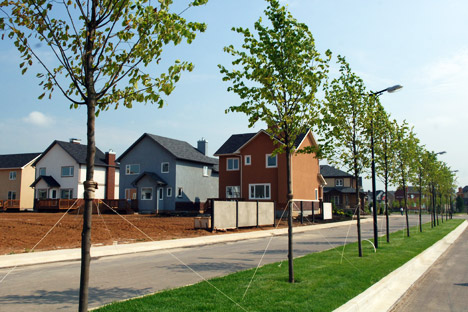 Moscow residents have decided to build energy efficient homes, a kindergarten, and school not far from the city.

In Winter 2011, Daniil and Nina Dobrynchenko gave birth to their fourth son. It was this event that prompted them to follow through with a long-held plan – to move closer to nature. As they began to look for a new place to live, the Dobrynchenkos discovered that none of the existing communities had all the things they wanted: a location near Moscow, energy efficient homes, no high fences, good schools and kindergartens, and good neighbors. So they decided to create their ideal community themselves.

“We don’t want to break ties with Moscow”

“We grew up, had children, and achieved something in the professional sphere. And now we’ve decided, through joint efforts, to implement a project that’s interesting to everyone,” sad Nina Dobrynchenko, who is the director of the charity Childhood Protection. She took the lead in organizing infrastructure for children in the community, while Daniil took on the eco-friendly construction and their acquaintance Yulia Severinenko, CEO of developer ZemAktiv, worked on the legal documents for the project and the purchase of the land.

Daniil Dobrynchenko created a page on Facebook where he outlined his plan for the village, and immediately received a “huge number” of requests from people who wanted to get away from Moscow to devote themselves to agriculture and communion with nature. He had to turn them down. “There are these eco-settlements with people who are marginalized, who didn’t settle down in the city. But we have a fundamentally different idea: we don’t want to break ties with Moscow because we work there, the city feeds us,” Daniil said.

One of the major problems facing the Dobrynchenkos was creating infrastructure for children: a kindergarten and a good elementary school. “There are local schools in rural settlements, but they are considerably inferior to Moscow ones. Taking a child to school in the capital every day is hard, people resettle in the city, and their house turns into a dacha [vacation house],” said Nina. According to her, the community will invite teachers from Moscow and will build rental accommodations just for them. Additionally, Dobrynchenko made contact with the winners of the Skolkovo contest for preschool and school education system concepts.

Homes made of straw, water from wells

Nina and Daniil plan to build energy-efficient homes in the village that consume the minimum amount of heating energy—such qualities that, for example, houses made of blocks of compressed straw have. “One of our friends is studying at Stanford University, working on the topic of energy-efficient house-building. He’s advising us,” said Daniil. These straw houses retain heat well and require far fewer resources to dismantle them than houses made of, say, concrete or brick. “Houses made of straw are being built in Belarus, Lithuania, America, China, and other countries. But our countrymen don’t understand the technology, many write to us that they don’t agree to straw houses because it’s housing for the poor,” said Dobrynchenko.

For heating, the village is considering the option of using pellet boilers, which use compressed capsules made from timber production waste. Water will be provided from drilled wells. Water heating will come from solar panels installed on rooftops; during the cold season, if need be, the same pellet boiler can be used to raise the temperature of water from the tap.

“Electricity is the only thing difficult to get. In the Moscow region, there is little sun for solar panels to use and not enough wind to generate power through wind turbines,” said Daniil. But in his opinion, there’s a way out. “It’s possible that we will combine several methods to generate electricity,” he said, adding that a natural gas mainline could provide the village with electricity and heat, but connecting to it would be costly.

Daniil noted that these technologies are still not the finalized version of the settlement’s infrastructure development. “With the help of the Internet, we’re studying experiences in building eco-villages in countries where the climate is similar to Russia’s, for example England, Denmark, and Argentina. We plan to bring in professional experts.”

A settlement for large families

According to the plan, the energy efficient village is designed for 200 houses. The Dobrynchenkos said that 10 families are now actively working with them to create the settlement and will probably live in it. Another 30 families are willing to sell their Moscow apartments in order to buy ready-made houses in the village or else purchase land plots and construct buildings on them independently. Most of the families that have expressed a desire to participate in the Dobrynchenko’s project have many children.

“I’ve long wanted to move away from Moscow, worked myself to find land, talked with representatives from existing eco-communities,” said Pyotr Sokolan, who recently joined Daniil and Nina’s initiative to create a village. Sokolan said that the main thing keeping him from settling in such a village up to this point was that most of the settlements were a long way from Moscow and moving to one would have meant changing jobs. “A few days ago, my fourth child was born,” Sokolan said. “I am responsible for my children, and the option of living like a hermit for fun is no good for me.”

Where exactly the energy efficient settlement will be is still not clear; it’s only known that it will be less than 30 km (19 miles) from Moscow. Severinenko, whose company is serving as the developer, said that a building site is currently being selected. Project documentation will be ready in 2013, the same year construction will begin. Severinenko says that she became acquainted with the Dobrynchenkos’ idea for an energy efficient settlement on the Internet. “I have two young daughters, I myself would like to live in an eco-village. I liked Nina and Daniil’s initiative, so we joined forces.”

Igor Bashmakov, executive director of the Center for Energy Efficiency, said that in many European countries, there are government grants for the construction of experimental energy efficient villages, but there are not yet any of those in Russia. Bashmakov noted that energy efficient settlements are beneficial to the state because they can save money, for example, on gas—natural gas production remains the same, but exports go up.