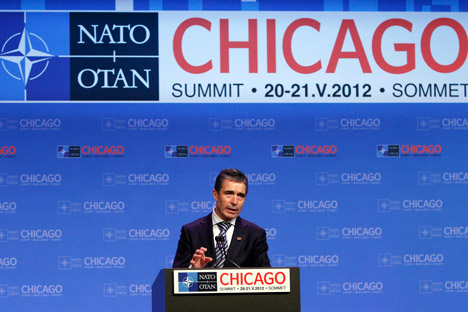 The latest summit in Chicago showed that the alliance is still groping for unity in a post-Cold War world.

The outcomes of the Chicago NATO summit are hard to analyze outside the context of the U.S. presidential campaign. The image of the “leader of the most successful military alliance in history” will obviously prompt observers to give a positive evaluation of incumbent President Barack Obama’s foreign policy endeavors.

Fareed Zakaria, a leading American commentator on international affairs, said in a recent interview with CNN: “The truth is NATO was a defensive alliance. It was designed for, really, to protect against Russia, against the Soviet Union during the Cold War. And ever since 1990 when all that ended, it’s been flailing around looking for something to do. But it is a very useful time when all these heads of state, heads of government get together, and there’s always something or the other on the agenda that’s pretty crucial.”

International terrorism is definitely not the challenge that contemporary armies should be focusing on. Afghanistan has proved this amply. By reiterating that the Afghan campaign was over and the main military contingents would be withdrawn by 2014, the U.S. head of state essentially confirmed that the rapid victory over the Taliban in 2001 neither eliminated the threat of terrorism in Afghanistan nor brought peace and prosperity to the people of that nation. There is hardly any other interpretation of the president’s words that the United States will not forsake Afghanistan. However, the formal completion of the longest war in U.S. history may contribute handsomely to the presidential race.

On the other hand, in the absence of the idea of a common enemy, America’s NATO partners are unwilling to spend on defense amid the European financial crisis, which does not seem to have an end in sight. The situation is so serious that shortly before his retirement last June, U.S. Secretary of Defense Robert Gates made rather harsh comments in his speeches and media publications concerning the distribution of the financial burden and transatlantic solidarity. The six-month military campaign against Libya, a country with 6.5 million people, showed that NATO was desperately short on both money and solidarity.

NATO Secretary General Anders Fogh Rasmussen came up with the “smart defense” concept during the Chicago summit, which is supposed to help ease the financial burden on NATO member-states. Saving on defense costs, however, is not something that unites military alliances.

Another idea aimed at bringing the NATO countries closer together was voiced at the previous summit in Lisbon – it was suggested that the alliance be able to give a collective response to the missile threat of rogue states, specifically Iran and North Korea. And yet, European missile defense has major defects.

First, Iran has neither long-range missiles capable of engaging targets in Europe nor nuclear weapons. North Korea has also been making little progress with its nuclear program, which was illustrated by the shameful failure of the North Korean satellite that was to be launched for Kim Il-Sung’s 100th birthday celebration this April.

Second, it is obvious that the “adaptive approach” to the engagement of NATO member-states in European missile defense put forward by President Obama was there only to correct the inconsiderate approach of the Bush administration to the establishment of a missile defense system in Europe.

Third, the idea of a European response to the missile threat has been troubling the Kremlin. Moscow has noted repeatedly that U.S. plans for European missile defense have the ability to neutralize Russia’s strategic missiles, which remain the only security guarantee for the country, whose armed forces have deteriorated during the past two decades of market reforms.

An attempt to appease Russia on this point was made during the Chicago summit. NATO leaders finally provided political guarantees that the European missile defense system was not targeting Russia. “NATO missile defense is not directed against Russia and will not undermine Russia’s strategic deterrence capabilities,” reads the declaration of the Chicago summit. “While regretting recurrent Russian statements on possible measures directed against NATO’s missile defense system, we welcome Russia's willingness to continue dialogue with the purpose of finding an agreement on the future framework for missile defense cooperation.”

Moscow did not comment on NATO’s missile defense statement. There is nothing new in it, save for the announcement of the collective nature of the system. Besides, Moscow remembers well the consequences of the verbal promises given to Mikhail Gorbachev not to expand NATO after the dissolution of the Warsaw Pact. NATO has completed three expansion phases since then and effectively approached the Russian border, where it plans to deploy missile defense systems. Moscow cannot be indifferent to the situation.

However, it is clear to everyone that missile defense decisions are made in Washington, and the Russian-U.S. dialogue on the topic will obviously continue. In one of his first decrees in his latest term as president, Vladimir Putin declared that Moscow would continue seeking legal – documented – rather than political – verbal – guarantees of NATO’s missile defense being not directed against Russia. This means that the speed of countermissiles must be limited by a written agreement. In addition, this agreement must stipulate the deployment areas, from which they would not threaten Russian missiles. “While currently there is no objective threat to Russian missiles, no one can guarantee that there will be no such threat in the future,” said one of the leading experts on the matter, Gennady Yevstafyev, retired lieutenant general of the Foreign Intelligence Service.