Russia and NATO in hot water 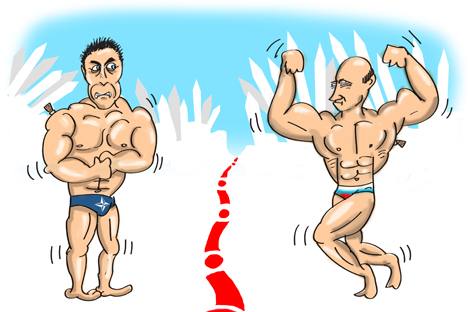 While NATO and Russia still view each other warily over missile defense, Russian experts - Victor Litovkin and Yevgeny Shestakov - don't see any significant progress in resolving this stand-off and warn against starting another arm race.

NATO and Russia still view each other warily over missile defense, while joint operations around Afghanistan are not as ideal as officials would like the world to believe.

The ministerial level Russia-NATO Council meeting in Brussels has ended. Like the earlier dialogue between NATO and the Russian General Chiefs-of-Staff held within the scope of the council, it was supposed to help the participants work out a common position for the NATO summit to be held in Chicago in May, but like that attempt, this one also failed. In fact, there will be no Russia-NATO Council summit in Chicago.

Nevertheless, NATO Secretary General Anders Fogh Rasmussen said after the Brussels ministerial meeting that the parties had reaffirmed their commitment to the basic principles of cooperation and to continued constructive dialogue on resolving remaining differences. Alas, as more than once before, the NATO-Russia Council demonstrated that dialogue is not the same as progress.

For Moscow, the main irritant is still the situation surrounding the missile defense system the United States and NATO are building on Russia’s borders. Russian Foreign Minister Sergei Lavrov again proposed that final resolution from the Chicago summit include a legal provision stating that the European ballistic missile defense is not targeted at Russia. “If the four-stage adaptive approach [to creating a missile defense system in Europe] is implemented, the final stage will see the creation of an infrastructure and potential that will pose real risks for our nuclear deterrent,” Lavrov said. But the NATO members are so far avoiding signing a legally binding document. The prime reason is the position taken by Washington, which will not allow even the slightest limitation on its missile defense program. Rasmussen has been hinting that NATO is prepared to give the Kremlin political guarantees, but legal guarantees are impossible because the parliaments of the 27 NATO member nations may not ratify them.

Yet Moscow will not be content with political declarations only. Russia will have to take asymmetrical but necessary measures to protect its national interests, as President Dmitry Medvedev said in November last year. This would include the deployment of operational-tactical Iskander missiles in the Kaliningrad and Krasnodar Regions in response to the deployment of American missile defense bases in Poland and Romania. NATO, of course, does not relish such a prospect.

NATO members voiced concern about Moscow’s plans during the ministerial meeting in Brussels, despite the fact that the sequence of actions is clear: if the alliance pulls back from its European plans, there will be no new Russian bases.

The shining example of NATO-Russian cooperation – Afghanistan – is also looking a little tarnished these days. Yes, Russia provides Kabul with Mi-17 helicopters paid for by Washington and not the NATO countries and Russia is training Afghan policemen on anti-narcotics courses outside Moscow and in Novosibirsk.  Moscow has offered supply routes for the International Security Assistance Force (ISAF), is ready to set up another staging post at the Vostochny airfield in Ulyanovsk and offer other opportunities that would facilitate the ISAF mission, in spite of protests by ultra-patriots. Russia does not, however, see any signs that the NATO coalition is genuinely committed to combating narcotics production in that country and their export via Central Asia to Russia and other former Soviet states.

Moreover, Moscow does not welcome the precipitous withdrawal by the ISAF from Afghanistan. It wants the coalition to be there until the Afghans are able to maintain stability in their country themselves. Nor is Russia ready to finance the building of the Afghan security forces, as Brussels proposes. Besides, if NATO withdraws its troops from Afghanistan, the U.S. will set up its own bases there, and Russian military experts are sure that their aim will be not to fight international terrorism and drug trafficking, but to influence the situation in the Middle East, including in the zone of responsibility of the Collective Security Treaty Organization.

Additionally, while Rasmussen said in Brussels that NATO had invited Russia to take part in the conference on Afghanistan as part of the NATO summit in Chicago, there is no document on a permanent mechanism for consultations with Moscow on the Afghan issue.

“When we got an invitation to the meeting on Afghanistan in Chicago, I asked whether that meant this was a response to our request and that, after Chicago, we would regularly take part in the meetings on Afghanistan in Brussels. But it turned out that this was a one-off invitation,” Lavrov told journalists. “If they are still interested in having us as a partner in the work on Afghanistan, I cannot understand why they do not want to invite us to regular meetings in Brussels. Considering all these circumstances, we will study the invitation and will give our answer shortly.”

Even so, Moscow is unlikely to agree to take part in such a meeting. Perhaps NATO is seeking to lure Russian leaders to the Chicago summit in order to demonstrate to the world that Moscow and Brussels, Moscow and Washington, in spite of major differences, are still on good terms. But that would be less than truthful. No declarations can hide the serious differences between the two sides. Ballistic missile defense in Europe is still an acid test of sincerity and trust. So far, these are commodities in short supply on both sides.

{***NATO has started an arm race by Yevgeny Shestakov***}

NATO has started an arm race

Sergei Lavrov, the Russian foreign minister, arrived for the Russia-NATO meeting in Brussels just five minutes after US Secretary of State Hillary Clinton. Their planes were parked side by side. “Hello, Hillary”, the Russian minister hailed his American counterpart, as he descended the ramp. “Hello, Sergei”, Clinton beamed, as she got into her car. And with a welcoming gesture, she invited Lavrov into the back seat, so that they could drive to the hotel together.

Well actually, no, it didn't really go like that. Given the current state of Russian-American relations, neither the Russian foreign minister nor the American Secretary of State would agree to go to the Russia-NATO meeting in the same car. For most Russians, the alliance is still the number one enemy, although the Russian military does not officially consider NATO countries to be potential enemies.

Dmitry Rogozin, Russian deputy prime minister in charge of modernizing the defense industry, posts daily progress reports on his Twitter page. Hundreds of billions of rubles are set aside for the defense program, which is planned for decades ahead. But these staggering figures, which will affect the lives of future generations, give people a sense of pride rather than provoke dismay over money that could otherwise have been used for social programs.

Opinion polls show that most Russians approve of the official plans to spend budgetary funds on modernizing defense. Why? The answer is simple: the Russian public does not trust NATO believing that the alliance is playing a game that threatens Russia’s security.

These fears are not without foundation. Moscow points out that the alliance is establishing its presence close to Russian borders. New military bases are being set up in Poland, Bulgaria and Romania. NATO patrols the airspace above the Baltic states, which was not the case before they joined the alliance. The combined military budgets of the NATO states are multiples of what Russia spends on defense. NATO’s conventional forces in Europe outnumber those of Russia. The American military is developing new types of weapons, including offensive systems that will be deployed in Europe and might change the balance of power in the region.

Despite Russia’s assistance to the alliance in Afghanistan, the American military is building major military bases there without any prior consultation with Moscow. These bases, Russian experts say, are strategically important for controlling Central Asia. The Pentagon’s bases will remain in Afghanistan even after most NATO troops leave the country, a prospect Russia does not relish.

Yet the greatest irritant in the relations between Moscow and NATO is ballistic missile defense. The fact that both the US and NATO leadership refuse to offer Russia legal guarantees that these systems are not targeting Moscow’s nuclear potential forces Russia to take retaliatory measures. All that Washington is ready to do is “to offer safeguards in a political format”. Moscow, however, does not consider such political promises sufficient: in military affairs, it is the defense potential and not the intentions that matter.

Moscow has always tried to avoid becoming involved in an arms race. With respect to missile defense, Moscow has consistently advocated the so-called spectral approach, whereby NATO and Russia would divide zones of responsibility and pool their defense efforts in countering common missile threats. That would save billions of defense euros for all the participants in the group.

Yet NATO has turned down the Russian offer under pressure from the U.S., the reason being the treaty signed by NATO in the Cold War. Under its Article 5, the alliance must protect its members independently, without counting on Russia’s potential. NATO has no intention of changing that article to bring it into line with current reality and avoid a new arms race.

On the contrary, many NATO countries are modernizing their armed forces. The talk about these changes being routine and not threatening anybody does not convince Moscow. Russia has to take steps to ensure its own security under the new conditions and make sure it does not become “a colossus with feet of clay” in the eyes of its western neighbors. Allocating considerable resources to modernize the defense industry is an inevitable response to the military initiatives taking place in Europe.

Is there any way to put a brake on this arms race? Yes, of course. At the Russia-NATO ministerial meeting in Brussels, Moscow suggested as a first step that, at its Chicago summit, NATO pledges its  “adherence to the rules of  international law” in its final declaration. Such a commitment would mean that the alliance would respect the jurisdiction of existing international institutions, and renounce the independent use of force unless it was authorized by a relevant UN Security Council resolution.

Even so, it cannot be ruled out that NATO will pointedly refuse to change its agreement with the current international crisis-response mechanisms. If the refusal is articulated, it would turn NATO, in Russia’s eyes, into the main threat to international stability. Such a turn of events would force Russia to think about creating military counterweights to NATO. That would put paid to any chances of stopping the arms race in Europe.

All of the programs for co-operation between Moscow and NATO would be gradually curtailed, as public opinion in Russia would reject any form of co-operation with a potential enemy. And this is not merely words. The recent Russian decision to open a transit center in Ulyanovsk to deliver non-military cargoes to the coalition forces in Afghanistan has triggered strong protests at grassroots level.

NATO’s refusal to recognize the world order and its demonstrative refusal to reckon with Russia’s geopolitical interests render meaningless any joint initiatives aimed at countering common threats. They merely fuel the arms race that many European countries want to avoid.