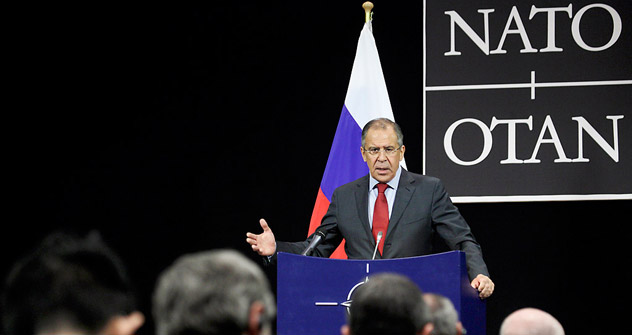 NATO and Russia are facing new dissonances because the Western alliance's upcoming Chicago summit is likely to be held without Moscow's participation.

Speaking at separate news conferences after a NATO-Russia council meeting in Brussels on Thursday, Foreign Minister Sergei Lavrov and NATO Secretary General Anders Fogh Rasmussen said both sides were committed to continuing cooperation on various fields. But an ongoing spat over missile defense, uncertainty over an offer from Moscow to open an airport in Ulyanovsk for NATO transports from Afghanistan and Vladimir Putin's looming return to the Kremlin have cast a shadow over the relationship, which was formalized with the creation of the NATO-Russia Council a decade ago.

At the May 20-21 Chicago summit, NATO is set to launch the first phase of its missile shield without having won Moscow's participation as hoped after the Lisbon NATO-Russia summit in 2010. Lavrov warned that he might not accept an invitation to send a representative to Chicago because the alliance won't let Moscow attend all meetings of nations contributing to ISAF, NATO's Afghanistan mission. He argued that some countries contribute just two officers to ISAF, while Russia provides vital transport corridors to Afghanistan. "We believe that our views are important. It is not fair that we get no invitation," he told reporters.

Rasmussen said Russia was invited to attend an ISAF-contributor meeting at the sidelines of the Chicago summit. He explained that Putin had agreed not to come because the event would be too soon after he was sworn in as president. "We agreed that due to a very busy domestic political calendar in Russia … it's not possible and not practical also to have a NATO-Russia summit meeting in Chicago," Rasmussen said. "Our relationship with Russia is not dependent on one single meeting. It's a long-term partnership," he said. Putin's inauguration is scheduled for May 7. Putin will, however, attend a Group of Eight summit in Camp David on May 18 and 19.

Earlier reports said U.S. President Barack Obama moved the G8 summit to Camp David in a goodwill gesture to avoid potentially putting Putin in an awkward position. However, a NATO source told The Moscow Times that the alliance was more than happy not to see Putin in Chicago. "They do not want him to steal the show," the source said on condition of anonymity because of the sensitivity of the issue.

Putin appeared before reporters without prior announcement at NATO's Bucharest summit in 2008 and reportedly tried to gatecrash the alliance's Riga summit in 2006, only to be rebuffed by the Latvian government.

The Chicago summit will also finalize a massive troop withdrawal from Afghanistan, which hinges upon Russian support because rail transportation through Pakistan and Uzbekistan has become increasingly difficult. Moscow has offered use of an airport in Ulyanovsk for airlifting so-called nonlethal equipment from Afghanistan, but the proposal has been met with bitter resistance by the Communists, who even staged a hunger strike. Lavrov did not say Thursday when the airlifts could begin.

Meanwhile, Lavrov made it clear that missile defense remains the biggest challenge for the country's NATO ties by reiterating Moscow's demand for firm guarantees that the planned shield won't be directed against Russia. He said a written political declaration, as offered by NATO, was insufficient and that the guarantees should be based on "objective criteria." Asked to explain, he said they should include "military, technical and other" criteria that ensure the system is not directed against any European country, including Russia.

Lavrov did not mention the Kremlin's long-standing demand for "legally binding guarantees," something that NATO has refused to grant in the past. But a NATO spokesman said Thursday that "technical criteria" referred to Moscow's call for technical limitations that would render the system incapable of intercepting missiles from Russia. "This is completely out of the question," the spokesman said on condition of anonymity.

Lavrov said Moscow would stage a public evaluation of the missile shield's technical capability during a major conference planned by the Defense Ministry for May 3 and 4 in Moscow. NATO officials said the alliance had been invited but a decision had yet to be made on who would attend. Evoking Ronald Reagan, Lavrov said that while words were important, one should "trust, but verify, as one U.S. president said." Reagan frequently used the Russian proverb when discussing relations with the Soviet Union.

Moscow has opposed NATO's missile defense plans, which include stationing SM-3 interceptors in Poland and Romania and on ships based in Spain. President Dmitry Medvedev has announced plans to station new missiles in the western exclave of Kaliningrad. NATO officials say the defense shield is technically incapable of intercepting Russian missiles and that Moscow has declined or not responded to offers to inspect their latest technology at a U.S. military base in Colorado Springs.

A senior NATO official made it clear that the plans would go ahead without Moscow. "NATO's system is going to be deployed no matter what," he said. Rasmussen, however, stressed that talks would continue. "While dialogue is not always easy, we continue exploring the options," he said, noting that NATO and Russian experts held a computerized missile defense exercise in Germany last month.