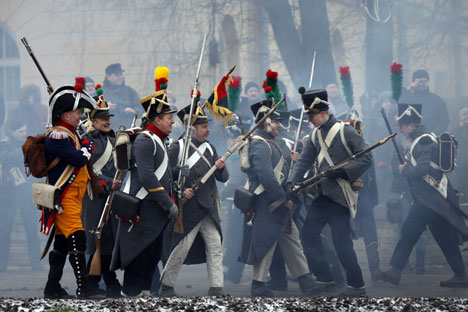 This fall Russia will celebrate the 200th anniversary of the Patriotic War of 1812. Source: RIA Novosti / Alexey Danichev

This year, Russia marks the 200th anniversary of the Patriotic War of 1812, which played an important role in the development of Russia as a world power.

Russia's war against Napoleon is considered one of the key moments in world history. Up until World War I, Napoleon's Russian campaign and the ensuing war of 1813-1814 was the largest military confrontation in the history of mankind.

Of the more than 600,000 soldiers of the French Grande Armée who crossed the Russian border in July 1812, only 60,000 survived. Russia achieved victory over the French at a high price. More than 100,000 Russian soldiers died in battle.

The battlefields of this war, known in Russia as the Patriotic War of 1812, decided the fate of many nations and peoples. Russia remained the last obstacle in the way of Napoleon's domination over Europe. By turning Russia into a satellite, the emperor could plan further expansion into the depths of Asia. The victory of 1812 was also a triumph for the Russian state and put Russia in a position to help preserve the existing world order.

For Russia today, trying to reestablish its position as a global player, emphasizing the War of 1812, in which Russia played a key role in world affairs, is particularly important.

In 2009, a state commission was established to prepare for the 200th anniversary victory celebration. The commission included representatives of the government, regional governors, heads of media organizations and representatives from the fields of science, art and culture. Then-President Dmitry Medvedev personally headed the commission. In 2010, a public council was formed to help organize the celebrations. More than $100 million was allocated from the state budget for the celebrations, which will take place over several months.

Echoes of 1812 and its aftermath have spread around the world. The occupation of Spain and Portugal caused instability in regimes there, which led the colonies of those states to begin their drive for independence. After the defeat of the French troops, several thousand former Napoleonic soldiers and officers went to Latin America to participate in the conflicts there.

The central event will occur at Borodino field, the site of one of the most significant battles of the French campaign. Approximately 80,000 soldiers died in the clash, which ended in a draw. In early Septembe, more than 3,000 people will put on Russian and French military uniforms of the era and take part in a grand reenactment of the battle. More than 300,000 spectators are expected to watch the battle. The restoration of a small imperial palace in Borodino is also planned, which will house an updated exhibit of the Museum of the Battle of Borodino. In addition to this museum and the existing panoramic museum of the battle in Moscow, a new museum devoted specifically to the War of 1812 is scheduled to open not far from Red Square.

The museums of the Moscow Kremlin will also have new exhibits devoted to 1812. On Sept. 14, 1812, Napoleon triumphantly entered the Kremlin after the retreat of the Russian army from Moscow; he spent two days waiting there in vain for the Russians to surrender. Years later, Tsar Alexander I had the massive guns used in the Battle of Borodino relocated to the Kremlin and this fall, the Kremlin museums will organize a special guided tour centered around these guns. The Kremlin will also be the site of one of the more spectacular events of the anniversary celebration On July 28, a mounted Cossack procession will march through the Kremlin’s Cathedral Square on its way from Moscow to Paris. The procession participants, descendants of the Cossacks who fought in 1812 against Napoleon, will march through Russia, Belarus, Poland, Germany and France on horseback, riding horses of the same breed that their ancestors rode into battle.

The descendants of Russian soldiers and officers who took part in the War of 1812 will gather in Moscow in June in order to remember the events.

A few online projects dedicated to the War of 1812 will be launched this year. The Ministry of Defense has opened a new section on its site where visitors can learn about the history of the Napoleonic Wars and review the field at the Battle of Borodino. Another site details the Russian military uniforms of 1812. On Sept. 29, the Russian State Library will host the opening of a specialized site featuring electronic publications dedicated to the War of 1812.

The celebrations will conclude in December. On Dec. 25, exactly 200 years after Alexander I issued a manifesto announcing the expulsion of Napoleon's troops from Russia, a solemn prayer service in memory of the victory in the Patriotic War will be held at the Cathedral of Christ the Savior. On the same day, a gala evening will be held at the Bolshoi Theater, concluding the anniversary events.