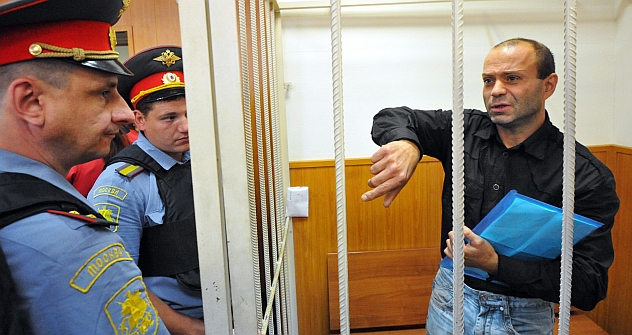 The court approved the request from former police officer Dmitry Pavlyuchenkov’s lawyers to remove him from prison because of his deteriorating health. Source:

One of the accused in the murder of Russian investigative journalist Anna Politkovskaya has been moved from jail. Experts are divided over the reaction the move will provoke.

Dmitry Pavlyuchenkov, a former police officer accused of involvement in the murder of prominent Russian investigative journalist Anna Politkovskaya, has been moved to house arrest on the order of Moscow’s Basmanny Court.

The court approved the request from Pavlyuchenkov’s lawyers to remove him from prison because of his deteriorating health. “Pavlyuchenko has met all requirements of the pre-trial agreements and there is no reason to take him in custody anymore,” said lawyer Karen Nersenyan speaking to Russian daily Kommersant, adding that the investigation has been almost completed and Pavlyuchenkov needs urgent medical attention. “Neither investigator nor prosecutor were against the house arrest,” Nersenyan said.

“The doctors informed me on April 26 and 28 that Dima had several epileptic fits in the jail cell,” Pavlyuchenkov’s mother, Nelly Pavlyuchenkova, told Kommersant. “On May 12 I knew that that he was actually paralyzed and couldn’t normally talk.”

Pavlyuchenkov has now left the jail, but he is not allowed to use any form of communication including the Internet. Only his close relatives, lawyer and personal doctor can visit him. He cannot leave his home without written permission from investigators and then only with a police escort.

Although the defense’s arguments seem sound, some experts and foreign journalists have reacted to the court’s decision with skepticism.

“I have been surprised by the fact that a person accused in being involved in murder is going to be moved from the jail to the house while girls from the Pussy Riot band are still in prison,” said Evgeny Minchenko of the International Institute for Political Expertise. “I don’t see the logic here.”

Georgy Chizov, vice president of the Center for Political Technologies argues that the release is just another element of confusion in the Politkovskaya case, saying that there is no consensus to what extent the investigation of Politkovskaya’s murder has been objective and accurate because of a lot of incongruities in the case. “Suspicions will remain,” Chizov said.

For his part, Gregory Feifer, a former correspondent for Radio Liberty and an expert in U.S.-Russian relations, says the decision contributes to the bad reputation of the Russian judicial system. “The case has been handled so badly by prosecutors and investigators and the apparent chances of finding – let alone punishing – who ordered the killing so slim that I doubt Pavlyuchenkov's release to house arrest will have a significant effect on the investigation,” Feifer said. “More important is the signal it sends about the Russian justice system's real priorities. Pavlyuchenkov – one of the key figures in one of Russia's most prominent murders in the last two decades – was released ostensibly because of ill health while lawyer Sergei Magnitsky was tortured to death, partly by being denied medical care, for acting against massive police fraud. Although I can't argue the merits of the medical arguments for his release, it appears to be another sign the legal system's main role isn't establishing rule of law as much as fulfilling political orders.”

Minchenko and Chizhov agreed that the court’s decision to move Pavlyuchenkov to house arrest will fuel further debate over the investigation of Politkovskaya’s death and may bring about negative reaction from the Western press. Feifer doubts whether Pavlyuchenko’s release will bring about much reaction “because of the relative obscurity of Pavlyuchenko's alleged role in the murder and because interest in the case has subsided.”

Pavlyuchenkov is accused of tracking Politkovskaya and informing Rustam Makhumdov – the accused murderer – and his accomplices of her whereabouts. Politkovskaya was killed in the elevator of her apartment building in central Moscow on Oct. 7, 2006.