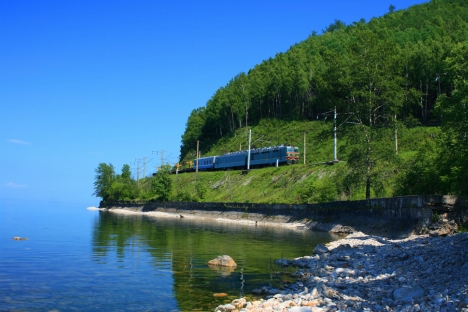 One of the main destinations on the Trans-Siberian is Lake Baikal. Visiting the world’s largest freshwater lake is a once-in-a-lifetime experience.

It is a  “short” seven-hour train journey around the most southern tip of Lake Baikal from Ulan-Ude to Irkutsk. Irkutsk is one of the great travel hubs on the trans-Siberian route and the point from which it is possible to explore the great lake.

Buses or minivans to Olkhon Island on the western shore of Lake Baikal leave from outside the main train station in Irkutsk. To find one, just wander around and look for a sign on a bus or minivan that says Ольхон (Olkhon.) The journey takes about five hours, depending on what sort of bus you take and it costs around 500 rubles (£10 or $16.) For this price, do not expect comfort.

The road to Baikal starts to deteriorate immediately outside Irkutsk and it is difficult for the driver to avoid the potholes. At some point on the road to the great lake, the asphalt stops and it becomes a dirt track. It was a bit like being driven in a bouncy castle on wheels. Nevertheless, there is quite a sense of camaraderie with everyone squished in as snacks are passed merrily around inside.

During the journey the driver will stop to allow passengers a toilet break after an hour or so (tip: hold your nose and do not look too carefully) and then for a lunch break. The traditional stopping place for the buses and minivans for lunch is a yurt-like structure somewhere along the dirt track, surrounded by hills. The food here is simple but welcome after three hours of bumping across potholes. The bus drivers, as soon as they have eaten, are ready to be off and away: do not stray too far from the bus because the driver will not wait!

The road towards the lake snakes tantalizingly in and out of view of the water, which looks cool, blue and inviting. In winter, the buses can drive across the ice to the island but in the summer, everyone is shuttled across by a small boat. Before crossing, all the buses are unloaded and the new passengers are herded into a small hut: they are asked to pay a small fee to keep up conservation work on the island.

It is then just a short journey across the deep blue water – which hides its chill well – to one of the most magical places in Russia.

I have not stayed in every guest house on Olkhon Island in Lake Baikal but I cannot think there would be a better place for travelers to rest their heads than Nikita’s Homestead in the settlement of Kuzhir on the western shore of the island.

The entire complex looks like something out of a fairytale: Built by hand from wood, all the buildings are ornately carved and trimmed in the traditional style. This is not a typical hostel; for one thing there are no big dorm rooms. I called a day in advance to book a room, only to be told the only one left was the most expensive – it cost $25 a night). When Juliet and I arrived, we expected to be shown to a room with other guests. How wrong we were.

After checking in we were shown upstairs to a beautiful room with two double beds and a separate shower and toilet area. After almost 14 hours of travelling, we could not believe our luck; it was heaven. Alas the room was only available for one night but the other rooms are also very good; they have sinks and the toilet and shower, shared with one or two other rooms, are only a short walk away.

The guest house is arguably the main attraction in the village and people staying in other places on Olkhon often come to Nikita’s for dinner or to listen to a concert in the evening. Nikita Bencharov, the owner, is a former table-tennis champion and he and his helpful staff can help organize almost anything on the island. In the winter, it is possible to snowshoe or drive across the lake and in the summer, swimming and trips across Olkhon are the order of the day.

Perched on top of a cliff, Nikita’s Homestead has a fantastic view of the lake and it is only a short walk down the coastal path to the Burkhan Cape. The beach is pristine and the water wonderfully blue. A day can be passed quite happily, lying on the sand, and honestly, there is not much else to do except read, paddle and watch the water-plane take off several times as it flies around the island. What is even better is that Olkhon Island is one of the sunniest places in Russia – so with around 300 days of sunshine a year, you’re likely to have good weather.

One of the best ways to see Olkhon is to take a drive across it. Although a tourism poster billed such a trip as a “jeep tour,” the jeep turned out to be a minibus. The minibus, in turn, turned out not to have very good suspension and as Olkhon does not have any real roads, it was another bumpy ride. Nevertheless, the tour is a good way to get to know the island – and meet some fellow travelers.

Vasily, our driver, spoke very little English, but rather rapid Russian. At one stop, high on top of a cliff with a view of the sky reflected in the water, he explained a little about the history and traditions on Lake Baikal. In this area of Russia, many people practice Shamanism, and there are often colored ribbons tied to the trees as part of these traditions. The ribbons can be tied in memory of those who have departed or by those who have something to pray or wish for. In other areas of Baikal, cigarettes or trinkets are left near stone statues or piles of rocks, I think, to ask the spirits for good luck and guidance. I say “I think” because Vasily was getting quite carried away with his storytelling at this point.

The minibus made several stops around the island at the beaches and cliff tops before stopping for lunch. Out of the back of the van came a table, bowls, spoons, tomatoes, cucumbers and soup.

The drive around the island lasts all day and takes in some spectacular views of the lake. The true expanse of Baikal is revealed on the eastern shore of the island as the water fades away for miles to meet the sky in a thin blue line. Nothing stands in the way of the lake and the horizon.

Arriving back at Nikita’s while the sun was still warm, four of us from the jeep tour decided on a plan of action. Having being thrown around inside a minibus for much of the day, we decided it might be time for us to take on the might of Baikal and go for a swim.

Although the lake’s waters look deeply inviting they are, in fact, very very cold – even in the shallows in the bay. Having already dipped a toe in to test the temperature we decided the only way forward would be to counter the cold by warming up and drinking shots of the vodka our new friends Zoe and Hugo bought during their trip to Mongolia.

With the vodka drunk and the sun moving towards the horizon, we took the plunge. For the swimmers out there, I recommend just diving in - I waded in gradually, waving my arms above my head as the water became ever-colder and crept higher. This just prolonged the agony.

Nothing, not even the vodka, had prepared me to meet the cold of Baikal. Normally after a minute or so in cold water it feels warmer as the body adjusts to the temperature. Not so with Baikal. The water was so cold it felt like tiny knives were repeatedly jabbing my skin. Jumping up and down did nothing to alleviate the feeling. After waving my arms around above my head for five minutes, I decided to take the plunge, go under and swim. Although it was not exactly pleasant, by the third dive it was bearable.

After about seven minutes, I had become more accustomed to the temperature, but I think that is because I could no longer feel my legs: it was time to get out. What is strange about Baikal is that it is, of course, a freshwater lake and it was odd to surface and not to feel the salt crackling in my hair and face as I sat on the rocks and dried off.

Returning to Nikita’s guesthouse it was time for dinner. Soup, pizza, pie, salad and tureens of vegetables are on the menu, depending on the day. The wonderful thing about Nikita’s is that the price of the room also includes breakfast, lunch and dinner so you do not really need much money on the island (which is good because there is no ATM).

The star attraction on the menu is omul, a white fish that is native to the fresh waters of the lake. Omul is often sold smoked or salted on the trains in Siberia around Baikal and Irkutsk, but it tastes best fresh. At Nikita’s they make it into delicious soups and pies – the best thing is that you can go back for seconds! Downstairs under the dining room there is also a small cafe selling cakes, beer and small snacks – perfect for a quite evening with new friends.

Nikita’s is almost like a self-contained village and it would be possible not to leave it during a trip to the island because the beach is nearby, the food is great and there are always interesting conversations to be had with travelers heading further east or west.

Break out a little into the settlement of Kuzhir, however, and you’ll get a taste of life for the locals on Baikal.

The houses are wooden and battered, and it is clear that tourism is the main source of income on the island. Trinkets from (relatively) nearby China, leather goods and carvings from the lake and from Irkutsk are on sale in the few tourist shops. Traditional Russian clothing such as valenki – felt boots designed for the harsh winters are also popular.

In the evening in Kuzhir, there are also song and dance performances put on for the benefit of travelers. They do not cost much and are a fun way to pass the evening if you like music and dance and – although they are for tourists – they offer an interesting insight into the culture of a region which is so different to other areas of Russia.