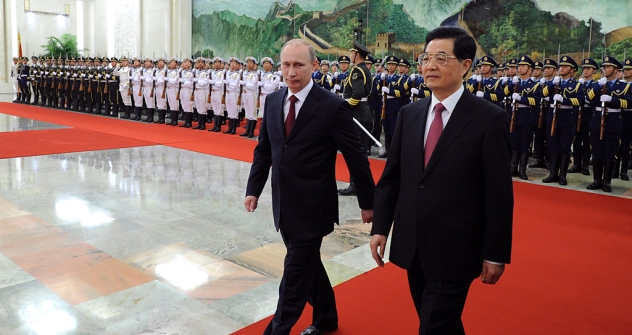 Russia and China on Tuesday moved closer to opening a joint investment fund, worth at least $2 billion, as part of President Vladimir Putin's visit to Beijing.

After retaking the Kremlin in May, Putin went to China after first traveling westward to Belarus, Germany and France last week.

In Beijing, Chinese companies also tentatively agreed to invest from $2.5 billion to $3 billion in hotels and office buildings in southern Russia, extend a large loan for the construction of an aluminum plant in this country and join forces with a Russian aircraft maker to design and build planes and helicopters.

There were no announcements by energy officials about breakthroughs in incredibly drawn-out gas negotiations, which have been stalled on price. China, as one of the world's largest natural-resource consumers, is hungry for Russian gas to flow across the border.

As Putin and Chinese President Hu Jintao looked on, Dmitriyev and China Investment Corporation chief Lou Jiwei signed a memorandum of understanding "completing the establishment of the joint fund and outlining the key principles" for its management and investment, the Russian Direct Investment Fund said in a statement Tuesday. The partners will look to develop projects that take advantage of expanding trade between the countries, which would mean such industries as engineering, agriculture, forestry, transportation and logistics, Dmitriyev said.

"We are pleased to have the Russia-China Investment Fund fully up and running," he said in the statement. "Our primary focus now is on making investments. … We are fortunate in that Russia and China are both big, rapidly growing markets that offer a wealth of investment opportunities across a variety of sectors."

The creation of the fund shows that Russia and China are moving to embrace mutual investment in addition to developing their trade ties, Dmitriyev said.

As agreed before, the Russia Direct Investment Fund and China Investment Corporation will each contribute $1 billion to the joint fund, which will then seek to raise another $1 billion or $2 billion from third parties. More than 70 percent of the fund's capital will target projects across Russia and other members of the Commonwealth of Independent States. The rest will focus on businesses in China that may or may not involve Russians.

In the area of real estate, the North Caucasus Resorts company tentatively approved a deal with China's Dalian Wanda Group and China Oceanwide Holdings Group. According to their letter of intent, the Chinese companies could invest from $2.5 billion to $3 billion in building hotels and other facilities in the often restive southern regions of Russia, Interfax reported.

Akhmed Bilalov, North Caucasus Resorts chairman, said the investment would focus on three areas: Sochi, Arkhyz and the lowlands near the Caspian Sea in Dagestan.

Separately, China Development Bank extended a $1.4 billion, 14-year loan to VEB, the government's development bank, which will use the money to finance construction of RusAl's Taishet aluminum smelter. RusAl, controlled by billionaire Oleg Deripaska, recently restarted construction after suspending work due to the global economic meltdown.

The smelter in the Irkutsk region will possibly buy a portion of its equipment from China and sell some of its output there, hence the Chinese interest in providing the loan, VEB chief Vladimir Dmitriyev said.

Russia and China also agreed to expedite their plans to jointly develop a wide-body, long-haul plane and a heavy helicopter, Putin said.