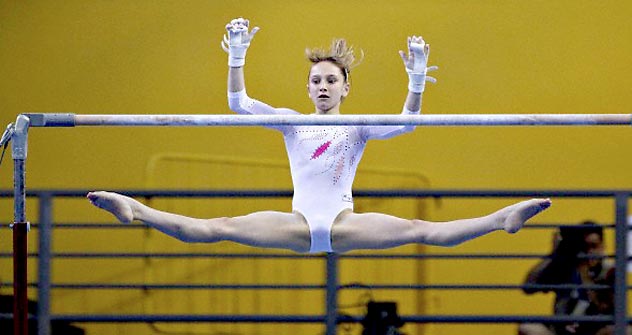 The training of Russia's gymnasts for the London Olympics is in full swing. Pictured: Viktoria Komova, a member of Russia's national gymnastic team. Source: Corbis / FotoSA

Russian athletes have ambitious plans for the London Olympics

At one time, countries around the world used the best Soviet training practices along with their own specific national approach in preparing for the Olympic Games. This was because the Soviet training method was consider the very best. Along with worldwide recognition, however, came accusations of severe and even cruel treatment of the girls allegedly in order to keep their weight and growth under control.

Alexander Alexandrov, senior coach of the Russian women’s artistic gymnastics team, dismisses these allegations as myths. “Soviet gymnastics training targeted technical skills, while also making use of cutting-edge scientific findings in physiology, medicine and recuperation. This is what we are trying to do now, drawing on expertise and experience, above all. But life goes on, therefore we are trying to bring up-to-date techniques into play as well,'' Alexandrov said. ''As for all the talk about how difficult it was to be part of the Soviet team, it should be mentioned that there were even tougher training systems, for instance in Romania.”

To prove his point, Alexandrov described the daily routine of Russian female gymnasts at their training camp at Lake Krugloye. With school already over for the summer, training for the London Olympics is in full swing. The athletes get up at 7:30 a.m., and after some warm-up exercises, they go out for a walk or a jog. A half-hour later, they have their breakfast, and at 10 a.m. sharp their first training session begins; it lasts for about 2.5 hours. Then they take a break, do some recovery exercises, and have some personal time. Their second training session lasts from 5 p.m. to 7 p.m., followed by massage and personal time. They have no second training sessions on Thursdays. They turn in at 10:30 p.m., and have a day off, just like everyone else, on Sundays.

The Russian team secured their place in the London 2012 Games at the World Artistic Gymnastics Championship in Tokyo last year, but now, in the final stretch before the Olympics, the athletes and coaches are facing another important task: building a competitive line-up.

Three of the total five spots on the team have already been assigned. Head coach Andrei Rodionenko has announced that Viktoria Komova, Aliya Mustafina and Anastasia Grishina have already been confirmed for the London Olympics. Mustafina, 17, was the world artistic gymnastics champion in 2010. Komova, also 17, was the all-around runner-up of 2011, and 16 year-old Grishina, who has just recently joined the adult gymnastics team, has also been in the spotlight of the international gymnastics world.

Unfortunately, Russia's more celebrated athletes are far from their top form yet, as their numerous victories brought about injuries as well. Still, they hope to get back in form in time to fight for Olympic medals.

At the 2010 European Women’s Artistic Gymnastics Championship, Mustafina injured her knee as she landed after performing the vault. Before the accident, her program was the most difficult in the world, and now she is working with her coaches to restore it.

“We are very happy that Aliya Mustafina is returning to the international arena,” Alexandrov said. “We want her not only to participate, but to perform at the level she had before the injury. But not all at once. Rehabilitation takes time. We have to move slowly, one step at a time, in order to reach the best possible form ahead of the Olympics.”

The efforts will, no doubt, result in success, especially given Mustafina’s real athletic stamina. She went to the world championship in Japan shortly after her knee surgery to support the team, even though she could not compete on all apparatus. Mustafina wanted to attend not only to show support to her teammates, but to prepare herself for competition. “I’ve grown in the year since [the 2010 compeition], and I’ve put on some weight, because weight always goes up when the training load eases off. I no longer have the lightness I had when I was 16. And it’s not just about the weight,” Mustafina said. “Lightness meant I could take it easy for a couple of days during training sessions and then do every element flawlessly on the third day. Now I need to do my best every day. But gymnastics is my life. I am very used to working in the gym, I can’t live without it. This is why rehabilitation was not too tough for me – I had no psychological problems, I was not depressed. I yearned to return. I had no doubts I would succeed.”

For her part, Viktoria Komova has suffered severals tibio tarsic injuries. She has also grown an inch, which causes her to brush against poles as she jumps off the uneven bars. But Komova is practically immune to the stress of competition.

When she was 16, Komova unexpectedly became team leader when Mustafina withdrew from the 2011 world championships. Then she found herself the center of controversy when she lost the all-around title at the tournament to a U.S. competitor by a mere 0.033 points.

“I did my best to forget about that loss,” said Komova. “After all, why dwell upon it when I had other competitions to take part in? Of course, we discussed our shortcomings with the coach, our mistakes. We generally try to analyze such situations rather than let them frustrate us. It’s still difficult not to be nervous during competitions, though. Sometimes emotions are simply overwhelming. The world championship was even harder for me than usual because I had missed a lot of events on account of my injury. It is not even because of the fear of pain – we are used to pain. It is simply psychologically difficult to compete: you become afraid of falling down, of making mistakes. This is why we repeat each element a hundred times at each training session. It gives us confidence. So, we have to work on ourselves. If I can overcome myself, I can hopefully overcome others too.”

Another secret to winning confidently and unconditionally has been passed on to the girls by state coach Valentina Rodionenko: “We can’t afford to be equal to our competitors. We have to be head and shoulders above them, otherwise judges may bring us down.''

Rodionenko considers the U.S. team the main threat to the Russians at the Olympics. ''Alexander Alexandrov, named the four countries likely to compete for medals: the U.S., China, Romania and Russia. But I believe that the Americans are our main rivals. Only they can outperform us because they are good with vaults. But I can assure you, you will not be ashamed of us at the Olympics!”

The rivalry within the Russian national team promises to be just as exciting to watch as the competition with foreign teams. Both Komova and Mustafina have said that they have not been watching each other during training sessions, focusing on their individual programs and elements instead. They will compete against each other for the first time in London.

“Mustafina and Komova are already the talk of the town,” said Alexandrov. “Only talented, hardworking, outstanding gymnasts have a chance of becoming champions. Mustafina and Komova’s victories are already known worldwide, and new victories are expected of them, including Olympic medals. Both the gymnasts and their coaches are doing their best now to reach the goal. How long it will be before they retire from elite sport, and how many Olympic Games they will participate in – it’s all up to them, their desires. It is not an easy task to maintain your form – to keep your weight in check, to devote yourself to endless training. The final line-up of the Russian women’s gymnastics team will be determined after the Cup of Russia scheduled for mid-June. Along with the line-up, the coaching staff will then also confirm the Olympic programme for gymnasts. For reference, the Romanians, who placed first in the team total at the European championship with Russia as the runner-up, already have their Olympic program ready. We don’t.”

Russian gymnasts will train until the Games at the Lake Krugloye camp, which features the same apparatuses as the London venue. The team will head to the UK on July 21, which allows one week for adaptation and acclimatization.