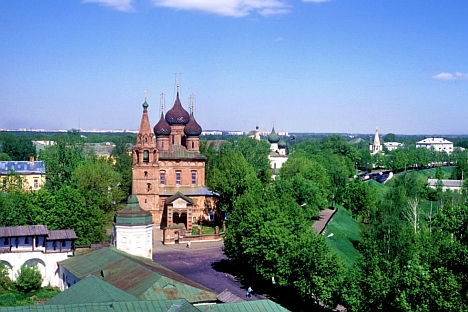 Among the centers of medieval Russian culture, none has a greater concentration of extraordinary art than the city of Yaroslavl, located on the Volga River some 150 miles northeast of Moscow.

Each year thousands visit the city – the city is a popular stop on river cruises and is easily accessible from Moscow—and most see at least one of the city’s magnificent 17th-century monuments: the Church of Elijah the Prophet, situated on the central square. But this is only one example of a remarkable array of churches built during the 17th century. Together they form one of the highest accomplishments of Russian art.

From first glance it is clear that Yaroslavl is not a time capsule, like Suzdal, preserved from the medieval past. It is a large provincial city (population around 600,000), with extensive industry anchored by petrochemicals. At the same time it has preserved some of the loveliest corners of traditional Russia, with a beauty enhanced by its location on a boulevard-lined rise overlooking the Volga.

Founded in the early 11th century by Yaroslav the Wise—one of the greatest rulers of medieval Rus – by the 13th century, the settlement already had masonry churches within monasteries, unusual in a time when most buildings were of logs. Unlike Vladimir, however, Yaroslavl has preserved none of its earliest stone structures. In 1238, Yaroslavl was sacked by the Mongols during their conquest of central Russia.  Although recovery from Mongol dominance was slow, union with Muscovy in the 15th century integrated the town into a much larger political and economic structure.

Yaroslavl benefited from its location and served as a center not only for trade within the extensive Volga River basin, but also for the exploitation of the forested expanses of the Russian north. In the latter part of the 16th century, Ivan IV (the Terrible) established a port at the Arkhangel Monastery on the Northern Dvina River near the White Sea and thus opened Moscow for commerce with western Europe. This in turn enhanced Yaroslavl’s strategic position within a mercantile network that stretched from the White Sea to Siberia and the Orient. With new trading possibilities, Yaroslavl attracted colonies of Russian and foreign merchants (English, Dutch, and German).

Although spared the worst of the disorder inflicted on Russia in the latter part of Ivan the Terrible's reign, the commerce of Yaroslavl declined during the interregnum following the death of Boris Godunov in 1605.  Known as the Time of Troubles, this period saw much of the country plundered in the course of political and social chaos. Yaroslavl again eluded the worst of the cataclysm, and in 1612 the city served as a center for rallying national forces against a Polish occupying force in Moscow.

The active participation of Yaroslavl's leading merchants in this campaign brought them extensive trading privileges from the government of the new ruler, Mikhail Fyodorovich (1596-1645), first tsar of the Romanov dynasty. As a result, during the 17th century the city not only accumulated the wealth necessary to build elaborately decorated churches but also established connections with cultural centers to the west.

Only Moscow could rival Yaroslavl in its concentration of new churches, which were sponsored by a combination of wealthy merchants, city districts, and trade associations.  During the 17th century, 44 masonry churches were erected within the Yaroslavl area’s 35 parishes. Despite damage inflicted during the Soviet era, many of these churches have survived.

The most renowned of Yaroslavl's 17th-century monuments is the Church of the Prophet Elijah (1647-50). The Skripin brothers, who funded the Elijah church, became wealthy from the Siberian fur trade. Their magnificent church consists of a central component raised on a high base that supported an enclosed gallery. The structure is crowned with five cupolas and its corners are adorned by attached chapels, as well as a soaring bell tower with chapel at the southwest corner.

In 1680 the main interior of the Elijah Church was covered with frescoes by a group of Yaroslavl painters led by two of the most accomplished artists in 17th-century Russia – Gury Nikitin and Sila Savin from the town of Kostroma. These splendid frescoes are among the best preserved in Russia and and show the growing Western influence in Russian religious art during the late 17th century. A similar tendency can be seen in the frescoes of the compact but richly decorated Church of the Epiphany (1684-93), located near the ancient Transfiguration Monastery.

A distinctive feature of Yaroslavl church architecture is the pairing of "summer" and "winter" churches, the smaller of which would be heated, while the larger, more imposing church would be reserved primarily for use in the summer. These structures were completed at different times, and even large churches had chapels that could be heated for use year-round. One example is the ensemble of the Church of St. Nicholas Mokryi (1665-72), which includes a bell tower, and its companion winter church, dedicated to the Icon of the Tikhvin Mother of God (1686). Both of these churches had ceramic ornament added to their facades in the1690s.

During the 17th century, some of the outlying districts of Yaroslavl created their own church ensembles. Among the most imposing is the Church of the Decapitation of John the Baptist at Tolchkovo, constructed in1671-1687 with funds provided largely by Rodion and Leontii Yeremin, whose wealth derived from leather workshops located in the district.  Despite neglect during the Soviet period, the interior is still covered with frescoes.  This magnificent church also has a gate chapel and a free-standing bell tower that is itself one of Yaroslavl's architectural monuments.

Another major architectural ensemble is located in the Korovniki district, near the confluence of the small Kotorosl River with the Volga. The area takes its name from the Russian word korova (cow) and was used as pasturage, but its inhabitants also engaged in ceramic crafts, brick-making, and pottery, all of which play a major role in the structure and decoration of the this ensemble of two churches, which boast a large free-standing bell tower between them. The main structure of the Korovniki ensemble is the Church of St. John Chrysostom, built in 1649-1654 by the merchants Ivan and Fedor Nezhdanov, who were buried in its south gallery. The church was remodeled with more elaborate decoration in the 1680s, including a large ceramic tile border for the window in the center of the apse, which faces the Volga – the best vantage point for the Korovniki ensemble in its entirety.

The second church of the Korovniki ensemble is dedicated to the Vladimir Icon of the Virgin. Built in 1669 as a "winter" church, it has a more modest appearance that complements the main church, particularly when seen from the Volga. In 1992, the Korovniki ensemble was transferred to the local community of Russian Orthodox Old Believers. Visits to the ensemble take place within rules set by parishioners.

These churches represent only a few of the many cultural landmarks that Yaroslavl has to offer. Major efforts are still necessary in order to preserve and restore such a rich artistic heritage.