Boot Camp or the Comfort Zone? 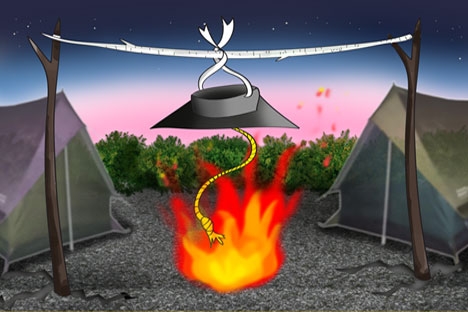 After 11 years in Russia, I recently graduated from journalism school in the United States, an experience starkly different from my seven years in Russia as a student.

The difference is especially apparent when the former is an Ivy League school and the latter a music school. The Moscow State Conservatoire, despite its prestige and reputation, wasn’t strong on amenities. Musicians were stuffed haphazardly into a long, low-rise dormitory behind the Moscow zoo, a building where notions about privacy, appropriate behavior, politeness (and sometimes bottles, books, and once, even an upright piano) quickly go out the window. Not able to concentrate on your studies when you have two cellists elbowing you in your room? Your problem. Rat sitting on your piano? Shoo it away. Hit on the head by overgrown mold falling from the ceiling? Tough luck.

I arrived in New York last year to go to Columbia University. After my arduous trip from Moscow, it was a bit of an anticlimax when a friendly super showed me my bare bones but scrupulously clean room, I sat down, plugged in my computer and was immediately on Facebook. During my years as a student in Moscow, my connection to the world had been limited to rare visits to Internet cafes.

Living in university housing in Manhattan proved a very different experience. Everything functions, roommates don’t seem partially insane, no one disturbs your studies, and despite a mice infestation earlier this year, conditions are sanitary. I remember in Moscow skinheads threw rocks in our windows and attacked foreigners around April 20, Hitler’s Birthday. I was more than a little surprised to learn that at Columbia, I can ask security to escort or drive me home at all hours of the night.

On a more studious note, I felt more comfortable with the way we were educated in Russia – it was not difficult to obtain a passing grade; however, if we wanted to work harder, the professors were more than capable and happy to lead you to greater achievements – there was no upper limit. But if you were content to just pass, no one pushed you – it was entirely your choice. I remember many a frustrated conversation my fellow classmates and I had – we complained about the sheer volume of school work we were given; so much that we couldn’t sleep four hours a night if we wanted to do everything. At times when our professors suspected that we might have gotten six hours of sleep, they slapped additional assignments on us just to keep us overworked. They rigorously put us through the motions, sometimes seemingly regardless of whether we got the abstract idea of it or not. It felt like boot-camp training in both good and bad ways – in a good way, we feel like survivors; tried, tested and capable.

There’s no saying what is better, or what was more useful for me. In some ways, the stark discomfort of life in Moscow spurred me to study harder. When there is no Internet, no pleasant cafes to frequent, no comfort food that reminds you of home or even a quiet place to think, throwing yourself into your studies becomes your only outlet of escape. In New York, I could find various methods of distraction, from beautifully manicured parks, a well-equipped gym to reasonably priced (and blessedly dill-free) sushi. A much easier life. But also very costly.

Despite students’ protests against raises, tuition at the Moscow State Conservatoire where I studied was less than $10,000 a year. The dormitory was free in my time (they have since started charging for it; inevitable in a city which now has real estate prices nearly as high as New York) and four or five hundred dollars took care of living expenses. Columbia requires a budget of nearly $70,000 for nine months of study – for tuition, miscellaneous fees such as health insurance, rent and living expenses. I’ve never earned 70 grand in a year, let alone spent it in just nine months. Maybe now I’ll study in France or Germany, where tuition is apparently just a few hundred euros a semester. But I wonder how much it will cost me to learn French or German well enough to pass the entrance exams? Seventy grand? Maybe I’ve had enough of schooling after all.