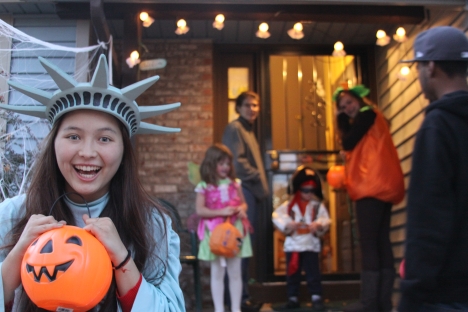 Accelerated Russian students are about to get the education of a lifetime as they prepare for a year in these United States.

The Russian high school students listened eagerly to tips on living in the United States. Be communicative and polite, keep an open mind when encountering America's diverse forms of worship, and volunteer in your community, like millions of Americans. "Remember: It's not right, it's not wrong, it's just different," said Natalya Sirchenko, who coordinates student exchange programs for the U.S. Embassy in Moscow.

Skinny girls, your host parents might think you're not eating enough, cautioned Yelena Fomenko of the American Councils for International Education, a Washington-based NGO that runs the FLEX travel-study program with funding from the U.S. State Department. Host parents also might ask you to do "man's work" like shoveling snow, said Fomenko, herself a FLEX alumna. Girls in the room tittered. The dangers of online social networks were also expounded upon. "You're going to America to learn about American culture. How can you do that when you're constantly talking to your Russian friends on Vkontakte?" Fomenko said.

Twenty of the 24 teens seated in rows on the second floor of the American Center in Moscow are among 244 finalists nationwide who will spend the next school year in the United States, living with host families, attending high school and participating in community life. The remaining four are alternates, meaning they'll go only if finalists drop out. The 15- and 16-year-olds in the room are an elite sample of the first post-Soviet generation, and the experience they bring back could very well change Russia. FLEX accepts a smaller percentage of applicants than Harvard. But the teens from Kirov, Samara, Tolyatti and other places in south-central Russia who attended their first official meeting Thursday were too anxious and excited about the upcoming journey to revel in being among the chosen 1.2 percent.

Having proved their maturity, intelligence and adaptability to program administrators, the teens must now prepare to make new lives from scratch in a foreign country. "I'm looking forward to improving my English, growing up and discovering new parts of myself," said Katya Shumailova, 15, whose native Kirov is 5,840 miles east of Lakeland, the midsized city in central Florida where she'll spend her next academic year.

Students and parents whispered as they waited for the start of the presentation on what to expect in the United States. Svetlana Rumyantseva, 16, of Tolyatti, does not know where she will study yet but was excited about joining the cheerleading squad at her new school. "I've watched a lot of movies about cheerleading," she said, adjusting her ponytail. "I love the way they jump around and shout things together. It looks like so much fun." Next to her, Valery Primov, 16, said he was worried about having to pass Russian school exams at the end of his year abroad. "In reality, I'll be studying at two schools at once," he said. Across the aisle, Valeria Tuleyeva, 16, sat alone. Tuleyeva is an alternate, meaning she might not get a spot on the program. "I really want to go. I mean, I really, really want to," she said. "The FLEX alumni I talked to said it was the best year of their life."

For many students, the selection process is nerve-racking from start to finish. Ivan Chesnakov, 16, credited luck and a little help from his parents for his success. "I didn't even get through the first round last year," he said. "I think my examiners this year were impressed that I knew that Abraham Lincoln was the 16th president." His father, Leonid, a real estate developer in Kirov, craned his neck to listen in. "There were so many forms to fill out," his son said. "We stayed up until 4 a.m. one night, and my mother spent days bringing candies and chocolates to doctors to get them to sign all the papers."

The lights were dimmed and the presentation began. Cynthia Ehrlich, head of academic exchanges at the U.S. Embassy, spoke first. "When I was growing up, we had drills in school where we had to get under our desks and put on gas masks," she said. "We were afraid that at any moment, the Soviet Union was going to bomb us." The parents exchange knowing smiles. "We did!" one said, eliciting chuckles. "Now we have a whole generation that are too young to remember those horrible, old days," Ehrlich said. "Nevertheless, there's no substitute for first-hand experience."

More than 7,600 Russians have graduated from FLEX, which is marking 20 years in Russia and the former Soviet Union this year, and they have brought their experience and language skills to leadership positions in business, government and elsewhere.

Yelena Fomenko and Bo Knutson, also of the American Councils, outlined the program in slide after slide, showing teens how to make the most of their experience and reassuring parents that their children will be in good hands. Parents were asked to let their children "spread their wings" in the United States: Don't visit, don't solve their problems for them and don't panic. One phone call every two weeks. Again and again, the students were asked to abide by the rules of their host families regarding Internet use, chores, curfews and the like.

With each gentle suggestion, each juicy cultural tidbit, the parents grew restless, almost wistful. "We didn't have any of these opportunities growing up," said Leonid Chesnakov, 41, the real estate developer. But it isn't jealousy that made the excitement bittersweet for the parents, it's the realization that their children are leaving home for the first time and that the pull of the outside world will only get stronger with time.

The program is supposed to prepare students to make a difference in their home communities, but it can also inspire them to move to bigger cities or even abroad. Sergei Rumyantsev, 41, a masseur from Tolyatti, shrugged at the suggestion that his daughter might eventually leave Russia. "That's freedom for you," he said. "What can a parent do except point them in the right direction?"

According to program regulations, the students cannot return to the United States for two years after the conclusion of the program, unless under special conditions.

For more information about the FLEX program click here.