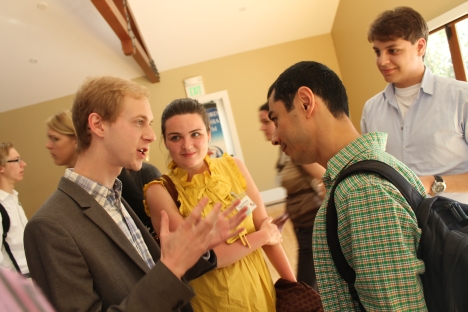 David Yang (right), the founder of ABBYY, talking with the Russian and American students at the Stanford U.S.-Russia Forum (SURF). Source: Pavel Koshkin

Russia and American participants in the 2012 SURF conference recently completed the second of two sessions at Stanford University.

“Investigate new possibilities with friends. Now it’s the time!” read the slip of paper inside Arman Arakelyan’s fortune cookie. Arakelyan, a student from the Russian Presidential Academy, bought the cookie in Palo Alto, California, on his way to attend the 2012 Stanford U.S.-Russia Forum (SURF). For Arakelyan, it was a good omen for the conference.

The Stanford forum held from April 17-22, was a follow-up to the SURF conference held in Moscow last October. “Our biggest problem in organizing the conference is simply its size!” said Lindsay Funk, the president of the 2011-2012 Stanford U.S.-Russia Forum. “We began on Tuesday and finish on Sunday, so that's a total of six days to plan. It takes a lot of work to ensure that we have quality programming for every day and that there are student officers on hand to help make it happen.”

When asked about the differences between Moscow and Stanford conferences, Funks said that at the Moscow conference, students were “meeting for the first time and trying to brainstorm their project topics and plan for the research ahead.”

“At the Stanford conference, students are reuniting and presenting on the work they have spent the past six months doing together,” she said. “At Stanford, we really try to bring perspectives that you might not get anywhere else, for example we had a ‘Design Thinking’ workshop that represents Stanford's unique design school.” 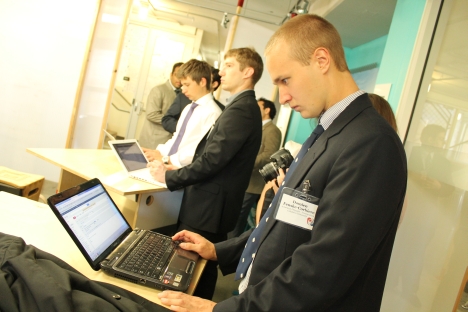 The conference in Moscow also gave students an opportunity to become familiar with all the ins and outs of Russian politics. An excursion to Russia’s State Duma and then a simulation by forum participants was a highlight of the October conference. In addition, the Moscow meeting brought together speakers from different think tanks while the Stanford conference was mainly addressed by professors and academics.  “The Stanford conference has a more academic angle,” said Zachary Witlin, a SURF delegate from Stanford. “Most of the speakers were professors [from Stanford, MIT, Harvard and Princeton] with the exception of the first panel on technology and business [which involved primarily entrepreneurs from tech firms Parallels and ABBYY].”

Since 2008, the SURF forum has brought together students from top Russian and American universities for discussions with prominent experts in U.S.-Russia relations. This year, the spring session was attended by Birger Steen, CEO of Parallels, the world’s leading enabler of cloud computing services; David Yang, founder of ABBYY; Jack Matlock, U.S. Ambassador to the Soviet Union from 1987 to 1991; Francis Fukuyama, a fellow at the Freeman Spogli Institute for International Studies, and many others. 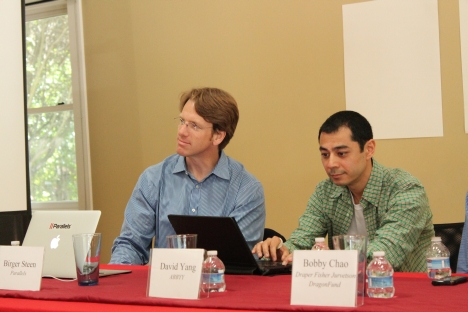 The major goal of the forum is to strengthen the political and economic ties between two countries and encourage collaboration in different fields including foreign and domestic politics, international relations, business and economic, nuclear energy, space exploration, military security, education and immigration.

The Russian and American students do collaborative research projects on these problems and present their findings during SURF’s spring session at Stanford. The research papers should appear in the SURF journal in the near future.

At the end of this year’s conference, the participants had a chance to visit Fort Ross, one of the biggest Russian settlements in the U.S. 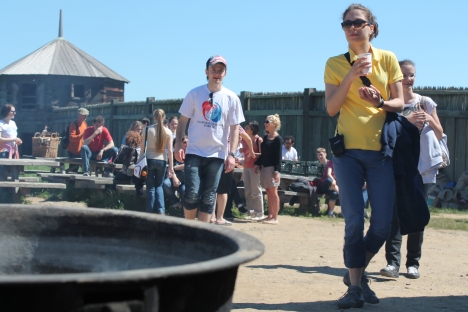 “The Stanford and Moscow conferences are both wonderful and I was so proud to be a part of both of them!” said Funk. “I think this year it was much easier to organize the conference than in the past since it's the third year of hosting a SURF conference at Stanford. We have a lot more experience to build off of now, and that means we can really focus on improving what we've done in the past instead of trying to create things from scratch.”

The SURF delegates also appreciated the conference. “I was very glad to see all the students I’ve met before in Moscow back here,” Witlin said. “It was a chance to present our collaborative projects with my Russian friends which was pretty gratifying after all the Skype meetings we organized during the year. In addition, it was very interesting to listen to speakers and other students with their presentations. Actually, there are a lot of things I didn’t know and the conference helped me to get familiar with them.”

“The main benefit I have is the paper we are going to publish in the SURF Journal,” Arakelyan said. “How many students can say that they have published a research paper in Stanford? And it’s pretty important. Moreover, we have personal contacts with prominent experts and pundits such as Francis Fukuyama. Now I have some business cards from some professors of MIT, Stanford and Harvard. We should appreciate it.”

"I believe the greatest benefit of SURF is its promotion of friendship and understanding among students from diverse backgrounds and cultures," said Sarah Shier, another SURF delegate from University of Kansas. "The most enlightening part of the conference was having the opportunity to interact with Russian delegates and develop friendships through our common interest in international affairs."