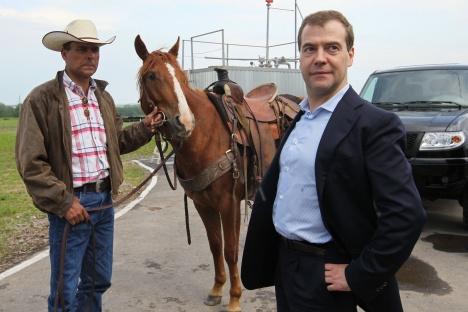 Building a beef industry brings Russian farmers and American herders together to do business, and the cooperation is building momentum.

The first waves of a new American migration has arrived in Russia, breaking on such shores as the Black Sea port of Novorossiysk and trickling into intimate local communities. They come in swelling numbers from all over the U.S. – Virginia, Texas, Oregon – and fill a growing niche in the economy.

But they need a lot of herding. And sometimes they have to bring their own cowboys. “Last year we imported more than 24,000 heads of breeding cattle from the United States, and they have been received very well,” said Valery Khromchenkov, the agricultural attaché at the Russian Embassy in the United States. “This cooperation is very important for Russia now, a good direction of mutual benefit between our two countries.”

All signs point to the continued acceleration of America’s expanding live cattle exports to Russia. Another leap forward should come soon, with Russia now poised to join to the World Trade Organization. On December 16 of last year, Russia received a formal invitation to become the WTO’s 155th member, the culmination of an 18-year effort. Russia’s WTO accession should have a substantial impact on their trade relations with the U.S., with both American and Russian officials at the highest level excited about the new benefits that will emerge.

According to a document issued by Office of the United States Trade Representative, following WTO accession, Russia has committed to a final bound tariff of 5 percent for live animals, with some tariff lines at zero. Russia currently applies up to a 40 percent tariff on some live animals. A USDA GAIN report states that purebred breeding animals already enjoy a tariff rate of zero, with other cattle subject to the same 5 percent pre-accession tariff rate, but with accession, these low tariffs will be bound for the future.

Though still at the early stages of cooperation, Russia represents a ballooning market for U.S. live cattle exports – what the U.S. Department of Agriculture described in a blog post a few months ago as “a new frontier halfway around the world.” “Russia’s live animal sector is one of the hottest markets around the world,” reads a March 20 GAIN (Global Agricultural Information Network) Report of the USDA Foreign Agricultural Service (FAS). At roughly $200 million annually, Russia is the third largest import market for purebred cattle, with the United States accounting for a 15 percent market share, competing with Australia, the EU, and Canada.

“Recent development projects, especially for beef, are likely to cause imports to double in the current fiscal year,” the report states.

The United States also indirectly benefited from the unfortunate outbreak of Shmallenberg virus, a new disease that appeared in Europe early this year, which has led Russia to close off all cattle imports from the European Union. Named for the German town where it was first detected in November of last year, the virus has since spread rapidly across Western Europe. The disease is spread by biting midges, and can cause stillbirths and congenital malformations in the offspring of infected animals. The virus does not appear to pose a risk to humans.

Russia banned the import of live animals from the European Union on March 20, which adds momentum to U.S. exports. “It’s been a real plus for the U.S. for Russian importers, it’s one less market for them to go to,” said Mike Phillips, President and CEO of U.S. Livestock Genetics Export (USLGE), a nationwide not-for-profit trade association funded by the U.S. livestock industries.

Cases like this serve as a reminder that agriculture is always subject to the caprices of the natural world. “It’s difficult to predict, because nature and agriculture are always connected with biology,” said Khromchenkov. “Europe is closed right now because of the disease. In the U.S., cattle are healthy now, and we prefer to buy from there.”

The Russian market opened to the United States following the signing of a USDA health protocol in 2008, which USLGE was involved with, to negotiate health certificates for exporting U.S. livestock and genetic material to Russia for the first time. There have also been a series of measures on the Russian end, including targeted programs of the Russian Ministry of Agriculture, agro-industrial complex development projects, and investment subsidies, aimed at facilitating cattle imports and developing the livestock industry.

In a meeting on Russian livestock farming in Tambov, in Western Russia, earlier this year, First Deputy Prime Minister Viktor Zubkov described livestock breeding as “the most important sector of the agriculture industry.” Vladimir Putin cited beef farming and processing and dairy farming as an area that requires further attention, despite state support. Total investment in development projects, according to Putin, including “the creation of new jobs, construction and modernization of some 3,500 farms and other facilities” between 2006 and 2011 amounted to 576 billion rubles, or around $19.6 billion.

Russia had never really been serious about their cattle industry in the past. They had dairy cattle, or dual-purpose cattle – which would be used for milk and then slaughtered for meat, an inefficient method that does not yield good quality – but never specialized beef cattle.

“We did not have a livestock industry in the proper sense of the word,” Vladimir Putin said at an April 11 report to the State Duma. “Today we engage in selection breeding and import cattle from abroad. It is very painstaking work that has a long cycle – about 8-10 years.”

Keith Long is the director of the Office of International Marketing at the Virginia Department of Agriculture and Consumer Services, and he also lived in Russia as a kid in the 70s and worked there in the early 90s, so he knows the country and the industry well. “The Russians never had a beef industry. Never. It was always cull cow,” he said, referring to the process of selecting out cows from the dairy to be used for meat. “Now they’re importing U.S. Angus, which has very good beef genetics. And for their first time in their history, they’re actually developing a very good beef industry where they’re going to have nice cuts of meat and steaks, just like what we have here in the United States.”

Virginia is one state where the Russian market is buying cattle. In January, Vistar Farms in Mechanicsville, an international distributor with offices in Russia and Turkey, in partnership with the Virginia Department of Agriculture and Consumer Services, sent a shipment of 29 Holstein bulls over to the Russian port city of Novorossiysk. The bulls were received well, and there was supposed to be a second shipment of 30 bulls in April but this deal hasn’t gone through yet. Valery Osipenko of Vistar Farms was in Russia in late April and early May to work out the final details.

“We’re hopeful that these exports that took place in January are just the beginning of a really solid relationship between Virginia and Russia,” said Todd Haymore, Virginia Secretary of Agriculture and Forestry. He cited live cattle exports to Russia as among the state’s new international market development efforts. “Russia has always been in our sights, there’s no question,” he said. “In the last few years I’ve been involved, I can honestly say that Russia has always been a target because of some growth opportunities that have been mostly focused on cattle.”

These deals have been about ten years in the making. “We went to Russia first back in 2002 and started meeting with people knowing that that market was eventually going to open up for live cattle exports,” Long said. In the meantime, Virginia governor Bob Mcdonnell has made promotion of agricultural exports a top priority of the state’s economic development agenda. The state reached a record high in agricultural exports in 2011, at over $2.35 billion, making them ninth in the nation.

Long predicts at least another five years of continual exports of live animals to Russia. “They’ve got major plans to expand their dairy operations, and they’re not going to be small family farms like we’re accustomed to here,” he said. “Basically Russia just leapfrogged family operations to more corporate farms. Everything is going to be 2000 cow-plus dairies.”

U.S. investment, as well as Russian interest in their expanding cattle industry, has led to a demand not just for Western cattle, but Western know-how as well. “There was always a demand for Western consultants,” Long said. “Now with such large dairy operations, they want U.S. dairy farm managers to come in help run those operations. The Russians really don’t feel comfortable with their knowledge of how to run those operations yet, so they’re looking for U.S. expertise.”