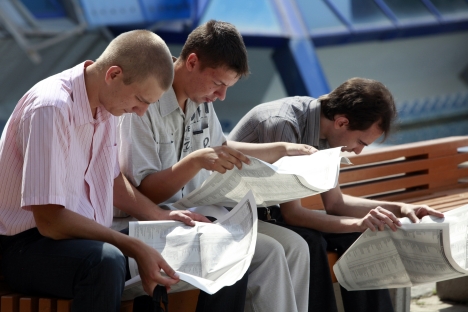 In April 2012, Russia had 75.2 million economically active people (53 percent of the overall population), while the number of unemployed people was 4.4 million. Source: Reuters

By pouring money into the financial system, the U.S. and EU did little to help their own economies; the benefits flowed mainly to Russia.

Last week, Rosstat reported Russian unemployment numbers for April, which showed that unemployment in the country today is lower than it was in 2008, before the financial crisis. In April 2011, unemployment stood at 7.2 percent; last month, it was 5.8 percent, and it 2008 – 6.3 percent.

In Russia, the label “unemployed” does not apply to all those who are currently not working; it applies only to people who have been looking for work for several months and are ready to start a new job within a week if one is offered. People who have not been looking for work (because, say, they have given up hope) are not considered unemployed. The economically active population is the sum of all people who are either employed or officially unemployed: In April 2012, Russia had 75.2 million economically active people (53 percent of the overall population), while the number of unemployed people was 4.4 million.

As a rule, unemployed people in Russia tend to look for and find work through their relatives, friends and acquaintances, and this approach is becoming more and more widespread. Additionally, more and more Russians are looking for work through the Internet. A year ago, 22.7 percent of Russians were scanning the web for jobs; as of April, this number had risen to 29.8 percent.

Increasingly, the ranks of the unemployed in Russia are made up of those who have left their jobs of their own volition. The April numbers showed that those who had left their jobs voluntarily was 27.6 percent, while those who were unemployed because they had been fired or because their company closed or downsized was only 17.9 percent. A year ago, these figures were 22.9 percent and 21.6 percent, respectively.

Since early 2010, the level of unemployment in Russia has been showing a steady and fairly significant decrease. During the global financial crisis, unemployment in Russia, as in other countries, was the most striking indicator of the health of the economy: it increased from 6.3 percent of the economically active population in 2008 to 8.4 percent in 2009. In the United States, this increase was even more significant: from 5.8 percent to 9.3 percent. However, in 2010 Russian unemployment dropped to 7.5 percent, while in the United States it continued to grow, eventually reaching 9.6 percent.

In 2011, the U.S. Federal Reserve tackled its war on unemployment with the help of the printing press. Through the use of bonds, it generated 600 million new dollars. But this had no effect: in August 2011, the U.S. economy created no new jobs. The European Central Bank also decided to fight unemployment by printing money: at the end of 2011 and the start of 2012, it distributed €1 trillion among European banks so that they could finance production, thereby creating new jobs. But as a result, unemployment in the European Union is now a record 11 percent of the economically active population.

Instead of creating jobs, these new dollars and euros wound up in the financial markets, primarily the oil market. As a result, world oil prices rose 19 percent last year and continue to remain very high. If in the United States and the European Union entrepreneurs do not want to hire new workers because of the very bad economic situation in their countries (in part because of high oil prices), then in Russia, the situation is quite the opposite. Entrepreneurs are ready to create jobs because the state of the economy is not at all bad, primarily because of high oil prices. Herein lies the paradox: in fighting unemployment in their countries, the Americans and the Europeans wound up defeating not their own unemployment but Russia’s.

Needless to say, unemployment in Russia differs from that in leading industrial nations. There the unemployed prefer to register with employment agencies and receive a significant government allowance. Thanks to the system introduced during the international financial crisis, this allowance is paid over a long period of time. Therefore people in the West who are out of work are generally unwilling to take just any job. Entrepreneurs in the United States and Europe know very well that when hiring new workers, they have to offer decent wages. Russian entrepreneurs, on the other hand, know that decent wages are not a necessity: new workers will agree to any wages at all.