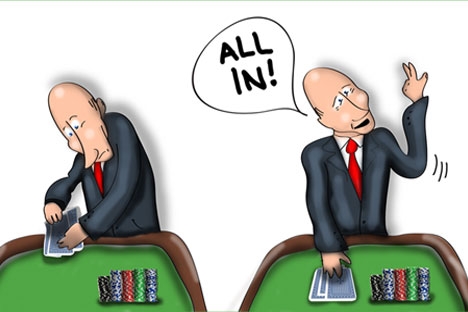 President Putin has plans for Russia’s economic development, but is Russia’s dependence on energy exports too strong to allow any changes to take place?

Russia’s recent government reshuffle can be seen as a proof that President Vladimir Putin intends to fulfill his pre-election promises of radical improvements in economic performance, its monitoring and governance. The sack of a few unpopular ministers was definitely meant to show that the Kremlin is bent on changing how the country’s economy is run. However, the appointment of these former ministers to powerful positions in the presidential administration raises doubts as to whether the reshuffle will seriously affect government policies.

The penchant of the president and his cronies for micromanaging even microeconomic problems hasn’t changed, and so the new cabinet is hardly likely to be any more influential than the old one – especially as many former ministers have retained their personal connections in the real economy. The fact that these men no longer sit in the cabinet does not prevent them from benefiting from private deals. So, while the personnel changes may seem radical, in reality, they show that Russia’s economic policies will change only superficially.

During the presidential election campaign, Putin voiced very grandiose but hardly realistic plans to make the economy more advanced and efficient. For example, he promised to increase the share of fixed investment in Russia’s GDP from 19.7 percent in 2011 to 27 percent in 2018; to raise labor productivity by 150 percent and to improve the business environment in order to upgrade the country’s rating in the World Bank’s Ease of Doing Business rankings from the current 120th place to 20th. The list of similarly unachievable goals is so long and ambitious that many reasonable Russian economists compare them with the renowned Mao Tse Dong’s  Great Leap Forward.

It’s no wonder that many suspect that the reshuffle of the government as well as the grandiose but unrealistic plans its members are committed to achieving are no more than political bluff to appease the Russian people that they elected the right man as their president for the next six years. Doubts about the choice are voiced not only by political opposition during protest rallies; they are also gathering momentum among Russia’s silent majority, first of all among the older generation, who wonder at the economic impotence of the current political elite. It took the totalitarian Soviet regime 15 years to convert a poor agrarian Russia into a developed industrialized nation, although the cost of this development in human lives was enormous. The Russia’s democratic leadership, on the other hand, has failed to upgrade the country’s economy in 20 years though they had ample financial funds, human resources and enjoyed favorable external environment.

After three years of slow struggling out of recession, the Russian economy has basically repeated the 2008 indicators of performance. While the developed countries are in or near a depression and the emerging countries’ growth is slowing, Russia again looks like ”an island of stability,” as the Kremlin claimed it had been four years ago. With 4.3 percent growth in 2011, Russia was the world’s third-best performer, after China and India. With this year’s growth projected at 3.5 percent, the Russian economy looks a lot better than that of its European neighbors. The major driver of this growth, however, is this price of crude oil. In March, the price of Russia’s major Urals brand reached $125 per barrel for the first time since July 2008.

The Kremlin may rejoice that Russia has overcome the recession, but the economy can hardly benefit much from the recovery so far as the quality of its business activity is concerned. The repeat of performance indicators as well as the deterioration of Russia’s global stance demonstrate that the economy did not use the recession to undergo a much-needed process of creative destruction, in which the old ways of doing business are destroyed and replaced by new and more productive ones. Not following this conventional mode of capitalist economic cycles indicates that deep down, there is something wrong with the Russian economic system.

Russia’s stubborn dependence on the export of raw materials is not just a curse of natural wealth; this dependence has been Russia’s systemic vulnerability since its capitalist development followed the route of an economy that relies on demand for natural resources on the world market. After its birth in early 1990s, the development of Russian capitalism was driven by external demand rather than domestic. The privatization of public assets in mid-1990s was meant to make the economy more efficient, but the private businesses and banks that bought state owned companies were interested only in commodities tradable on the world market. Thus, the development principle that was initially built in the economic structure by the government’s neoliberal strategy turned out to become Russia’s core vulnerability.

The strategy did not change in the new century with changes on Russia’s political scene as the economy continued to benefit from it. Exports of oil, gas, timber, steels and other low value-added goods now account for 25 percent of GDP and generate a half of the federal budget revenues. As long as this remains the case, the promises of President Putin and his men to renovate the economy can only be regarded as a political bluff.

The president has named the petro-chemical, automobile, shipbuilding and aerospace industries as well as agriculture  as potential economic drivers that would receive financial support and trade protection. The improvement of defense potential and infrastructure are also priorities for the government. Can the economy sustain these plans? Russian economists estimated that the realization of all Putin’s targets will require the country’s growth rates in the coming years to be well over 5 percent. So the question is: How this goal can be reached while the forecasted 2012 GDP growth rate will be 3.5 percent and next years’ rate will depend solely on highly volatile world oil prices?

This systemic vulnerability of the Russian economy proceeds from the fact that no matter how vigorously Putin and his men proclaim their desire for change, in fact they are personally committed to the existing order of things that ensure their personal well being. And this order is often determined not inside the Kremlin walls but in boardrooms of Kremlin-friendly oligarch-owned companies.

Last fall, Gennady Timchenko, who controls Gunvor, the world’s fourth-biggest oil trader, leaked plans about creation of what he called an “Energy Empire.” Controlling a third of Russia’s seaborne exports of crude oil, Timchenko intends to increase this share to two-thirds by buying out oil transportation infrastructure and a sizable pack of assets of such Russian oil oligopoly as Rosneft. Big natural gas industry assets acquired recently by Gunvor may also be added to consolidated hoard of the Energy Empire.

It is rarely mentioned that President Putin, who received a degree in economics for research in oil industry development prospects, is a long time supporter of the idea of making Russia a world energy center. Considering this personal interest, his old friend’s goal of creating an Energy Empire is an economic development strategy which is a lot more feasible than making Russia a global financial center, so dear to the heart of former president Medvedev. When and how Timchenko’s ambitions might be realized is anyone’s guess. But if they are, Russia’s vulnerability will be exacerbated to a point of no return from its position of a natural resources supplier to developed economies.

Felix Goryunov is a Moscow-based economic journalist who has been covering world economy and international trade issues for over thirty years.