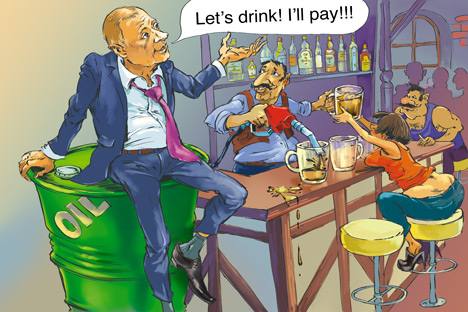 Now that the elections are over, the government must take a hard look at the promises that have been made, the reforms that need to be carried out, and where the money will come to pay for them.

The lack of opportunity for real political competition and the alleged large-scale fraud in Russia’s recent parliamentary and presidential elections gave rise to doubts in a significant part of society about the government's unconditional legitimacy. This is extremely dangerous, because the country will soon face a number of serious challenges, and the authorities will have to solve many difficult social and economic problems, and will likely need to use unpopular measures to do so – and this doesn’t take into account fulfilling the campaign promises made by the candidates.

President-elect Vladimir Putin himself estimates the costs of the programs he proposed during the campaign at roughly 1.5 percent of GDP. Experts have placed their estimates even higher. For example, the Center for Macroeconomic Research at Sberbank calculated that all the election promises added up to 4-5 percent of GDP, while the Fitch agency figured $160 billion, or 8 percent of GDP for six years. All of these potential dispensations come on top of the government's previous commitments, including the spike in defense spending that committed 20 trillion rubles up to 2020, as well as increased salaries for the law enforcement and security agencies, and pensions. Add to this the need to finance megaprojects such as this fall’s APEC forum, the Sochi Olympic Games in 2014, and the 2018 World Cup, among others.

All this would be disturbing, but not frightening, if the economy were growing rapidly and sustainably. Unfortunately, the obvious danger of a deepening recession in Europe, the hard landing of China's economy expected by many experts, and the unstable economic growth in the United States are creating an extremely unfavorable context for the Russian economy, which is critically dependent on export of raw materials. Even by the a priori optimistic official estimates, Russia's GDP will not grow more than 3-4 percent per year in the near future, and that is assuming continued high oil prices on the world market. The unfavorable global economic conditions are superimposed on a number of time bombs left over from the government’s previous tactic of "avoiding risky and unpopular decisions.”

One of these is the long-postponed and well-overdue social reform. First and foremost, this means pension reform; coverage of the constantly growing pension fund deficit is now the largest item in the federal budget. Meanwhile, reforming healthcare and education will also require increased budget expenditures. Salary increases have already been announced for doctors, teachers, and university professors, and promises were also made to bring scholarships to the level of the minimum wage in the coming year. These areas, especially healthcare, should also become priorities, because the rates of life expectancy, level of morbidity, and infant mortality in Russia are unworthy of a country with a claim to being a great power. And the list of problems that are long overdue for fundamental reform could go on and on.

To these kinds of strategic problems should be added such current troubles as the sharply declining trade surplus. Russia has still not become an attractive country for investment. Moreover, during the 2008-2009 crisis and in recent months, there has been large-scale capital flight from the country. Statements made during the election campaign about reviewing the results of the privatization of the 1990s, a number of scandalous criminal cases against entrepreneurs, and the continued appalling corruption hardly encourage hopes for a fundamental change in this trend. As a result, it is unrealistic to think that Russia’s possible current account deficit will be offset by capital inflows. At the same time, prospects for modernizing the economy by importing advanced technology from western countries are sharply deteriorating, as are the possibilities of borrowing on foreign capital markets.

Debts have to be repaid. I recall that some years ago, the Russian budget was balanced with an oil price of $30 per barrel. Now the budget is balanced only if the oil price is $115 per barrel. A large and long-term decline in oil prices will lead to fiscal disaster. Tensions over Iran mean that energy prices are remaining at a level comfortable for the Russian budget; but only a madman would count on their continued significant growth. Furthermore, new technologies for extracting and transporting gas, plus the introduction in the developed countries of alternative energy sources and energy-saving programs, may lead to reduced demand for Russian energy supplies in the medium term.

There are no economic miracles. To solve the inevitable budget problems, we have to either lower costs (meaning minimally a marked slowdown in growth) or increase the tax burden. The first carries a political risk, which the authorities cannot accept given the doubts in the population about the legitimacy of the government and the lack of consolidation of the elites. The second option remains. It is no coincidence that even as a presidential candidate, Putin spoke vaguely about "a tax maneuver." At the same time, under the banner of social justice, ideas are being thrown around in public discourse about a luxury tax and compensatory fees for dishonest privatization. The option of raising taxes is extremely dangerous. Russian businesses, as everyone knows, pay huge bribes in addition to official taxes. Nothing has yet really been done to reduce these. Moreover, the vitally necessary restructuring of the Russian economy and the growth of innovation require tax incentives, in the form of differential tax cuts. We already have a very fresh experience of raising taxes on wages. Its result was the collapse of economic activity, primarily by small and medium-sized businesses, and the shift of entrepreneurship to the shadow economy. This has fiscal implications, among other things. The increase in such tax collection last year was 300 billion rubles less than planned, because of the increased tax burden.

There is a global solution to the problem, and that is a sharp increase in economic growth. Large-scale liberalization of economic life could potentially provide this, coupled with a marked reduction in corruption and in administrative pressure on business. True, its effect will not be felt immediately. And alas, the authorities show absolutely no willingness to go this route. But they should act before the course of events forces their hand.

Andrei Nechayev is the president of Russian Financial Corporation, a professor and a former finance minister.